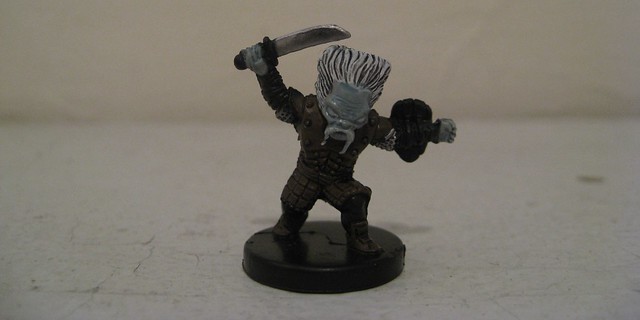 Last night's Television Night was canceled-- double canceled in fact! First canceled because Jenny had a meeting she would have to be at until ten o' clock, & then second canceled because she was sick & didn't even go to that meeting. Instead, I abandoned her & after eating some kafta kebab, I slipped out to Bar Reis to meet up with the usual suspects--

elladorian-- to introduce our dear friend

fatbutts to the noble art of roleplaying. Well, actually I walked out with David & Maggie, since I'd failed to get a hold of them by phone & they showed up at our apartment, but you get the picture. We pulled up to a table draped in red curtains in Bar Reis' basement-- actually, not a bad venue, once David switched the dull light bulb for a brighter one. A few beers later & we were off. First, let me continue to discuss the venue, before I talk about the game. The bartenders seemed to care a lot about putting on music. They offered to use one of our ipods, but I don't own one & nobody had theirs with them. Eventually of course other people came down, but they weren't too disruptive. I mean, first off, you have the right to play pool as much as we have a right to play Dungeons & Dragons, so there is that. I mean more-- we weren't disturbed by the bustle, overmuch. I know David & Maggie have tried to game there before, equal parts successfully & disastrously, but I think if you went earlier it would totally be a solid space. A few people were curious-- "what are you guys playing?"-- but accepted "Dungeons & Dragons!" as an answer, & didn't make pests of themselves. Thanks for courtesy, people! Eendracht macht macht!

I'd been thinking about what character I'd play for a bit. I never get to play anymore, remember-- I run my Oubliette campaign, but I don't play in any games. So, what would I play? Edbury had mentioned running a game where someone was playing a Mindflayer, which was just a reskinned Dragonborn with a "psychic" breath weapon described as a mindblast. Very clever, & it inspired me, too-- when I got the Player's Handbook 2 I took a look at the Longtooth Shifter's fast healing & thought "hey, that would be cool, to play that & just say I was a Half-Troll." In the end, all that was for naught-- I decided to play a Dwarf. I don't think Dwarves get enough attention in the gaming circles I roll with, nor do most short races. I'm not a short creature, naturally, so I don't mind pretending to be. Also, I got the Derro mini (above) which I kind of adore, so that cinched it. That, & the fact that I wanted the Constitution bonus. Class-wise, I had vacillated between Druid & the old stand-by, Warlock. I've had a Druid character in mind for a while, who doesn't shapeshift into natural creatures, but rather, alien ones-- the four-armed white apes of Barsoom, the xenomorphs, that kind of thing. I toyed with that idea, but I decided to play a Warlock with a simple twist-- I'd make him a Gunslinger. Largely inspired by Half-Made World, one of the Chronicals of Amber's book titles & Pathfinder's new playtest of their Gunslinger, I made a whole little peninsula of worldbuilding. Just switch the word "rod" to "gun" in the Warlock's class description, & voila. Supernatural hexslinging gunmen. The Infernal Pact-- to which I belonged, by patron being Barbados-- was now the Cult of the Gun, the Star Pact became the Old Guns (or Ftagunslingers), & the Fey Pact became the Guns of Avalon. Catspaws of a cosmic conflict. Oh, I didn't want to be a Martial Gunslinger-- I wanted all that came with a Contract with Hell. & also a gun. A serape, white mustachios, & a white pompadour with a black streak rounded him out, visually.

My wanting to play a Gunslinger put the seed of an idea into David's mind, & he decided to run an Eberron game. Fine with me, I am down with Spellpunk. Bring on the dystopian near-future Middle Ages! That ain't too far of a throw from where Oubliette is. David & I hashed out some background for my character-- some of which went out the window when I switched from Half-Troll to Dwarf-- & I think it came together. Maggie played a Longtooth Shifter Seeker-- I still don't know what a Seeker is, but if you say "that is the class where you have to find the Golden Snitch to end the match, right" Maggie will look at you with death in her eyes. Lilly played a Halfling Shaman, & decided to be one of the scattered survivors from the Cyre now called the Mournlands. See, Eberron is set shortly after a huge war-- kind of a mash-up of the Hundred Years war, & the Civil War & both World Wars all at once-- that ended when a mysterious Hiroshima-like event blew up one of the nations involved. Interestingly enough, Cyre-- the deceased country in question-- also features largely in my backstory. When I mentioned that maybe Lilly's character knew mine, since I had left Cyre at just about exactly the time Cyre blew up, Maggie asked "how exactly?" & I said "pretty suspiciously exactly," at which point Maggie looked at me again with death in her eyes! Glare! Also earning me the Stare of Doom from Maggie was my southern accent-- yeah, I decided to break out my wandering southern accent, which everyone found pretty hilarious. David set the game just two years after the Day of Mourning when Cyre blew up, & one year to the day after the treaty that brought an end to the war. It is the Fourth of July combined with the New Year, & we were all in the big city of Sharn to celebrate.

The game was going along great, all tickety-boo...up until combat came along. The same thing happened when I ran a game for my co-workers. Engaging people's imaginations & improv skills is fun, & people really get it. Once the rules come into play-- "why do I roll this die? What do I add?"-- there is a bump, but people still roll with it. Picking minis? Yep, that is fun. But when a fight happens...the gears grind to a halt. We still got through the fight, but it wasn't the same-- Lilly was even asking "can we go back to talking?" I have to agree. More & more I'm convinced. Dungeons & Dragons Fourth Edition is a great little small unit tactics wargame, but kind of a crummy roleplaying game. When we were wandering about Sharn, talking to strangers from the crowd, or holed up in a bar, we were all having fun, but when it came time to fight the soldiers on horseback, the shine sort of evaporated. The combat system is just too much, the characters are over-crowded with complicated options. If you know the language of gaming, like I do, it isn't too bad, but if you are a newcomer it is all opaque. Even if you are someone who has been gaming forever, it still is just an uphill slog. So, that is that. Also-- something I noticed. Narrative improvisation. Some new players-- Lilly is one, Kat is another-- want narrative control over the world. They just start improvising things about the setting, about their backstory, all at once. Now-- I'm a bit of a control freak as a Narrator, & David is much more laissez-faire, but that isn't exactly my point. Or maybe it is, partially. If I am running the game & you are someone like Lilly who wants to freestyle about how your brother is evil but possibly omnipotent-- that is fine with me, but I don't want it in the middle of the session. Give it to me in an email between sessions, or during a brainstorming confab, & I'll give you my end of it, we'll negotiate, & then I'll toss it in the mix. David is a lot more seat of the pants; he'll roll with it, but I am more of a soup-pot guy. I'll have a lot of stuff bubbling in the pot, but I want control over what goes in there. Anyhow-- I just think it is interesting the way different tabula rasa players react to "group storytelling."
Collapse