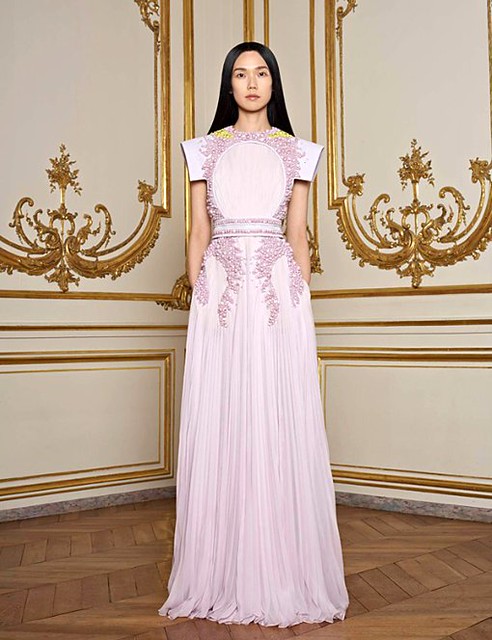 I promise I won't keep talking about Cate Blanchett's dress forever, but I also want to note that Givenchy's Spring 2011 line is all pretty amazing. I'd seen it when it debuted & made plenty of right-clicks for my campaign. It is all Ultraman & Kaiju & wonderful. I guess I am just taking what comforts I can since we lost John Galliano in a fatal case of having his head too far up his ass. The world of fashion aside, what have I been up to? Not too much, thank goodness. Kelly & I went to Dogmatic for lunch yesterday. It is a gourmet hot dog joint where they drop your dog into a hollowed out piece of italian bread, basically. I was fine with it but not gonzo for it. I had a lamb sausage with sun-dried tomato & feta cheese, as well as a beef sausage with gruyere. Like I said, it was fine. Then home. Last night was supposed to be laundry night, but I really didn't feel like staying up to midnight all miserably with drudgery. When Jenny got home, it wasn't hard to convince her to go along with that. Instead we split an order of Thai food-- crispy dumplings & lad na, which was pleasantly peppery. The sole activity of our evening from there was watching two episodes of Fringe. It was almost a two-parter, & another solid example of storytelling. Hey, thanks for closure-- I know I compare Fringe to the X-Files often, but yet another similarity is that both shows could use small scale successes as closure, keeping larger plots dangling without leaving the viewer unsatisfied. Fringe, however, promises to up the ante by actually resolving & advancing the big story arcs.

You know who I don't have pity for? The guy in the secret conspiracy who spits out, as he dies, something like "you fools don't even know what you are doing! You don't even know who the real villain is!" Well, yeah dude, you were acting all covertly, how are we supposed to know. I may not pity that guy, but I sure do like using him as a storyteller-- the Oubliette campaign with

toughlad was rife with those guys, until half the party joined the secret conspiracy. Oh, & when I was asleep, I had a dream about being a paranormal researcher, a la Fringe, but my platinum blonde sidekick was Leslie Grossman, who played Lauren in What I Like About You. I even remembered that her character's name was Lauren! I had pulled a Mulder & disappeared for several years with no warning, & was trying to put a team back together. I can't remember who, but a guy was already with me, & I got Lauren to join by, on my way out, saying in public "I am sorry for leaving, Lauren." That is all it took! Then I had a second half of the dream, where we were in some trick house with reversible walls, retractable floors, secret passages, all kinds of stuff. We were trying to fake a haunting, & the best idea I could come up with was to be the butler, & let my tail show. I had a tail, a fleshy exposed vertebral column. Riff Raff & Lurch, they are scary, right? In the end, midway through the spook show, I ended up in the girl's bathroom having sex with a tattooed biker version of Jenny. I had to hide from one of my co-workers, who came up checking the stalls, looking for me.
Collapse