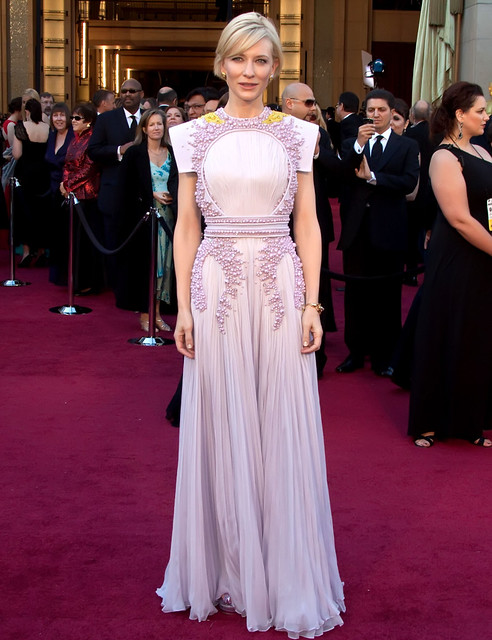 Here is Cate Blanchett wearnig Givenchy at the 2011 Oscars. Apparently this dress is controversial, because people are stupid idiots who are dumb. In the interests of owning up to my biases, I will say that since Cate Blanchett played Galadriel, she can do no wrong in my eyes. That being said, she clearly looks amazing. I think she looks like a shugenja from Legend of the Five Rings, personally, & that is a high compliment. In summary, Cate Blanchett rules, Givenchy is great, & this outfit is super amazing. While the other rubes were watchign the Academy Awards, though, I was busy with other deeds. In particular, I was watching Resident Evil: Afterlife. That movie...kind of made no sense. In no way at all did it make sense, actually. They dropped the ball by blowing the "multiple Alice" premise in the very begining. Then depowering Alice? That was confusing, but alright-- even though the rest of the action scenes might as well have been about someone with superpowers? Anyhow, it was a return to form-- I think the first, second & fourth Resident Evil movies are mindless fun, & that Resident Evil: Extinction was maybe actually a good film. On the plus side, ...Afterlife was an action film with a female protagonist & deuteragonist, & that has to count for something. I guess that is my verdict. Jenny was out at Kira & Nino's-- I had been invited, & while I wanted to want to go, I didn't. I've just been around people all the time, & I wanted to have a chance to...not be. To ease off my misanthropy. After Resident Evil, I put on Halo: Legends, which is a collection of short animated films about Halo. Most memorably, "Odd One Out" was a Dragon Ball Z-esque parody, & very funny, while "The Duel" was a samurai tale told about the Sangheili Elites.

So that was my Sunday, in a nutshell. I made some eggs, finished reading a book & said goodbye to

ranai & not much else. Then came Monday, on-rushing! I had hoped to grab lunch with

borntohandjive but that didn't pan out; conflicting schedules, I guess. Instead I ate a Goodburger with Nicole, & ran an errand to Babies Я Us for Jenny. Done & done. Work was a mess of side projects, otherwise. Before I could go home, I still had work to do! Dire deeds, in fact. The dentist! I don't hate going to the dentist, not particularly, but I don't like having interruptions in my routine that result in pain, either. Not especially, at least. The dentist was fine; I take okay care of my teeth, so I never have cavities. Just goes to prove how much I hated Doctor Wendy when I was a little kid; she was a torture queen who gave me like, ten fillings. Anyhow, I got my chompers all scraped & polished up. Then home, meet up with Jennybird, & off to the gym. I focused on my arms-- there were no clean towels at first, so I dropped a few sets of tricep & bicep curls before my cardiovascular work-out. Still no towels! & no cable; or, the cable is out, so I was left scraping the barrel with Anthony Bourdain, who I don't hate but am not a huge fan of, either. Back downstairs for some more curls & some bench presses, then some more cardio & then boom, that was my hour & fifteen. Picked up hot wings on the way home & then we watched an episode of Fringe. I find Olivia really appealing as a protagonist, & I can't quite pin down why. This episode focused on psychosomatic assassination drugs! When it was over, I wanted to watch another one, but it was already late. I bugged Jenny a bit in bed & then finally tried to knock off for slumber.
Collapse