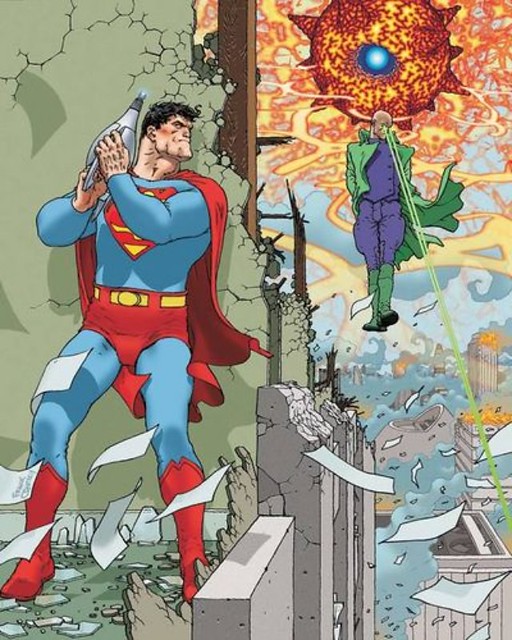 Came home from work, cracked open a beer-- Full Sail LTD 4, which is the first lager I've liked in a while-- plunked down myself down on the couch & put in All-Star Superman. Does that sound awesome or what? My expectations were middling, but high-- both at the same time. I didn't really need a lot from it-- it would remind me of the comic book All-Star Superman, so as long as it didn't betray it, I'd be a happy camper. I was pleasantly surprised by it, over-all. About midway through

ranai came in to watch it, & I don't think she was very impressed. I tried to explain to her that of course Superman could do X or Y, he's Superman. Superman isn't worried if you think he's a sissy for rescuing Lex Luthor from certain death, because Superman clearly is invincible & omnipotent. I guess it was a little too weird for her. For me, I think Chris Sims really hit the nail on the head with his review. A good DCU animated movie, in the end analysis. No Superman preventing Regan's suicide-- presumably removed to make it palatable to Cartoon Network-- but a huge loss. What is with all the deaths in the prison scene? Superman is there already, he should have been saving all those people. & last but not least what is with Superman saying he doesn't have any mercy left, with Solaris begs for quarter. "You'll live." is what he says in the comic, & that is way more in character. Still, it makes me all smiles for Superman. & like Lets Be Friends Again says, it is a fitting epitaph for Dwayne McDuffie. I'd watched the "Superman Now" short on Thursday-- it is always fun to see the very Scottish Grant Morrison talk reasonably about The Man of Tomorrow. At least, he sounds reasonable to me!

Man of Tomorrow.
from a world of broken glass,
born of a red sun.

He is Gilgamesh,
Metropolis is his Ur,
but he conquers Death.

Inspired by the film, I went back this morning & re-read the comics. I would say they do better than just "hold up," & are in fact open to deeper reading & interpretation. For instance, the entire sequence with the Bizarro World didn't work for me when I originally read it, but on subsequent revisitings I find that it is actually quite moving. The Descent into the Underworld. On this reading, I think my favorite part of the story was the story of Superboy & the Superman Squad, "Funeral in Smallville." Or wait, maybe it was "The Superman/Jimmy Olsen War!" where black kryptonite turns Superman bizarro/evil & Jimmy Olsen drinks the Doomsday serum. My idea of Jimmy Olsen is a guy just as talented as Lex Luthor, but in a world of different ways-- part Mark Zukerberg, part James Franco, part Alexander McQueen, part Thom Yorke. He's Superman's best pal, after all. What both those stories have in common is Grant Morrison's ability to add to a mythology without reducing it. Doctor Leo Quintum is a fantastic character; Lex Luthor is the evil scientists & Leo Quintum is the good scientist? Fantastic. Kal Kent? The whole DC One Million thing stands as a hallmark achievement of the madness of Grant Morrison. Zibarro, the bizarro Bizarro. Nasthalthia, Lex Luthor's niece. Krull, the Subterranosaurus, son of the Dino-czar. Heck, Solaris. Grant Morrison scatters seeds, ready to ripen into whole stories. Frank Quitely is great-- listening "Superman Now" to how they drew on Eisner & Yiddish theater was really interesting, but it is the logos that get me. The "?" in the Unknown Superman's logo. The "2" in the S-shield at the end. Zibarro's "Z." Tiny flourishes, but it is the icons that stick with me. These are stories good enough to invoke on the holidays. The high notes are all there-- Jor-El talking about alchemy as Superman readies himself to defeat Lex Luthor, the Tyrant Sun Solaris, & ultimately undergo the transformation into the Philosopher's Stone to save the sun. All just really great stuff, reminding me how much I need to buy Absolute All Star Superman. I guess my birthday is only a few months away, huh? 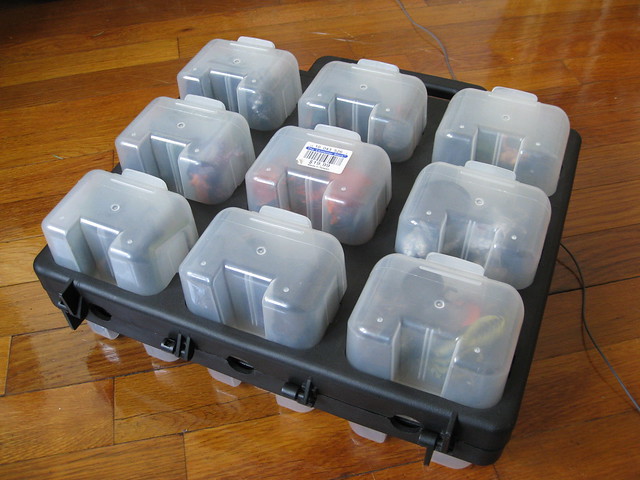 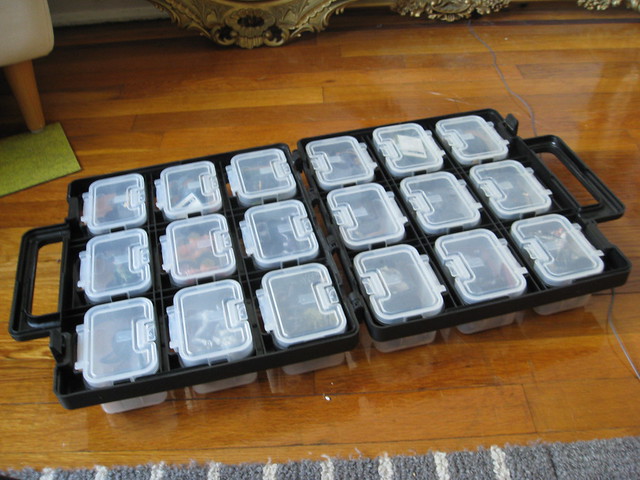 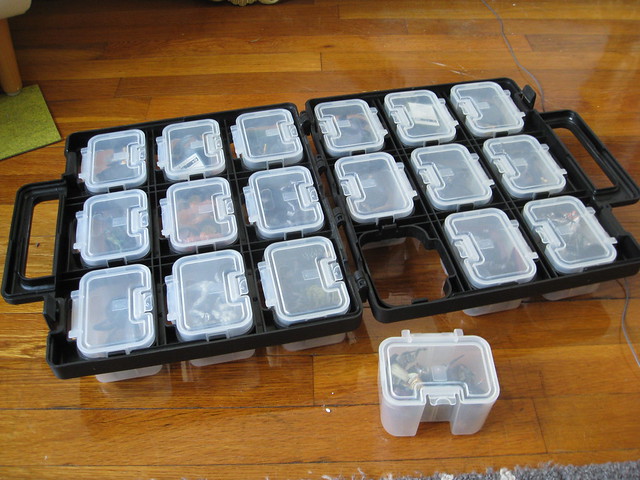 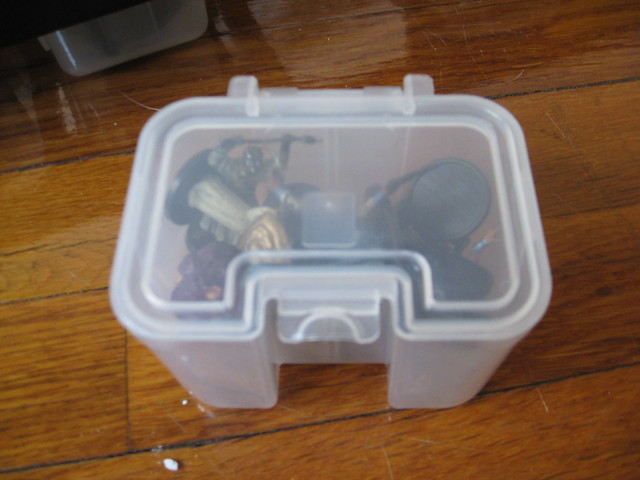 I use a couple of different containers to store my Dungeons & Dragons miniatures in, but this one is my favorite. It is a black clamshell that has, as you can see, eighteen detachable compartments, each of which is about the right size to hold a "theme" of minis, or a set of miniatures for a single encounter. Since you can pop them off & take only the ones you need, it works really great. The other day Danielle & I went looking for it at The Container Store & came up short.

fordmadoxfraud snagged me a box of minis, & my collection was already getting cramped, so I kind of need a new one. Sadly, they didn't have one, & neither they nor I could find it on their website. It is entirely possible that they had it two years ago, & then that was that. Still, I want it; I figure there has to be one on sale somewhere, either through another retail store, or a website, or second hand. Anywhere. The only info I have is a Container Store price tag for $19.99, a barcode & some numbers-- a little 13, then 10 043 526, then a little 1-- so like, 13 10 043 526 1. If anybody knows anything about this container, or can find it or something like it, can you let me know? I'm...starting to get a little bit obsessed. Update: Meggy is the winner by identifying it as the "Clip 'N Go Craft Caddy." She found it by calling The Container Store, which I did but to no avail. Her theory is that she has a sexier voice than me. Dagnabbit. Now I just need to find one for sale somewhere! Update Two: I can't seen to find the "Clip 'N Go Craft Caddy" for sale anywhere-- maybe that was just the name The Container Store gave it?-- so I will probably buy this cell storage unit found by

onatopofthings, which you can see in action here. Storage containers are serious business.
Collapse