The bloody white dress
fluttered down, a broken flag,
into the River.

I liked Felix Gilman's Half-Made World so much I had to chase down his earlier works. Thunderer is about a City. You know, a Metropolis, a Gotham, an archetypal urban center-- well, really I should say it is a Sigil, an Amber, a Tabelorn, if I want to be accurate. Ararat is the city where the gods walk, but not lightly. It is a city on the edge of chaos, streets recharted because a god stooped down there, buildings radically changed when a god knocks upon the door. The gods are forces of nature, reckless & loose, & Ararat is vast, maybe infinite. It reads, to me at least, like a novel spun out of a campaign setting, which is isn't something I have any problem with. There are details that strike me-- the Spider's cult as a sort of "Lottery in Babylon," the legends of the Tuvar as a sort of exegesis of the Bible, bodies buried in the cement of bridges as sacrifices, the etymology of the word "atlas" in a world without Greek mythology (60, 91, 217, 255). I can't help but see bits of Gene Wolfe's Book of the New Sun & Book of the Long Sun scattered about-- having a deuteragonist named "Silk" will do that, I guess. In particular, the man of wires in the prison reminded me of the Green Man Severian encounters-- though Silk fails to rescue him. I liked Thunderer just fine, but it wasn't a speck on Half-Made World, if you ask me. The cover was kind of terrible, but at least they put a slightly better one on the paper back. There were flashes of potential in here, but it just didn't quite come together. I have high hopes for the next volume, however!

Giant space hamsters!
Gnomes use them to fly in space.
That's a good monster.

The ...Revisted series is great; I think we can all say that. In fact, I would argue--& Misfit Monsters Redeemed does argue-- that Paizo really claimed its space in the gaming market starting with its goblins. Wayne Reynold's art, a Gremlins sensibility, & James Jacob's brutal nursery rhyme songs all came together. It showed the versatility of the hobby-- unique portrayals of broad ideas, iterated storytelling, all that. Pathfinder gave the goblins a hook-- a theme that anyone could readily use. You could read about the goblins & just get it. Creepy mischief, goofy malice-- it was a seed, something that planted itself in your imagination & let your mind bear hideous fruit. It didn't hurt that I am something of a goblin aficionado, & they struck a similar chord to my own interpretation. That was just the start-- Pathfinder made a niche out of taking a view askew approach to the classic archetypes of fantasy roleplaying. Giving something that wasn't too strange, but provided a new take on old monsters, classes, & cliches. Eventually, Misfit Monsters Redeemed was inevitable. The book is like a dare, issued to themselves. Take some of the most ridiculed monsters & try to make them awesome. Lets not mess around here-- some of these monsters are stupid. Some monsters are dumb but gamers like them anyhow-- & those were eliminated. Sorry gelatinous cube, but everyone likes you despite how silly you are. Flumphs on the other hand are right on. Some of the retrofits are easy, & more a matter of taking something goofy like a flail snail & treating it seriously. Some remind me of other creatures-- adherers just remind me of kaorti, not that I'm complaining. Alien glue monsters are creepy. The Wolf-in-Sheep's-Clothing embraces that direction-- if you are going to make something alien, pull out all the stops. Hell, give it chainsaw teeth. The "Lurking Ray" is the real success story of the book. Taking Trappers & Lurkers Above-- evil monstrous floor & ceiling mimics, respectively-- & pairing them with the Executioner's Hood to make one monster at various stages in its life cycle? That is economy of narrative, that is, & it succeeds splendidly at making otherwise silly monsters into something at once spooky & plausible. 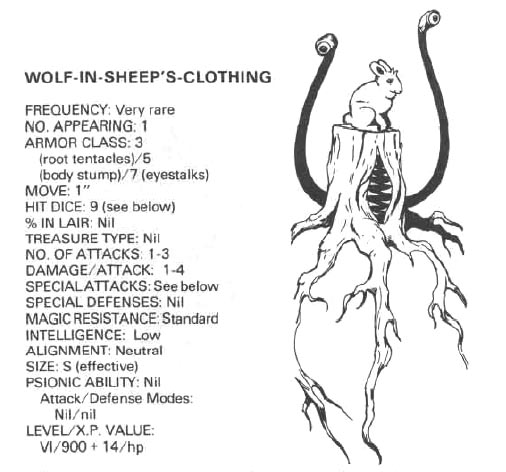