Jenny wants me to talk about Friday, which is hard, since I blocked it all out! Well, first, I had a very nice lunch with Marie & Eliot at Stand4. That was a pleasant interlude in an otherwise frustrating day. I don't know why I was in such a bad mood, but I was! I sure was. In the morning I had talked to Jenny about hanging out at Kira's at night-- I had the impression it would be like, a little family dinner thing. I couldn't get a hold of Jenny all day, so after work I went home to wait for her to contact me. At about seven I got a text. "Kiras" it said. "When?" I said. "now" it replied. Fair enough, said grumpy Mordicai. I changed out of my pajamas & started walking over. I was about a third of the way there when the rain started coming down. Great! So I ran part of the way. At least I got a little exercise! I got there in a bad mood, ran up the stairs, & then Kira couldn't recognize me through the peep hole! To be fair, I am pretty tall, so it was at chest level & all she could see was a wall of black. That is me-- squint & I turn into a fortress of darkness. I got there, slumped in a chair, & pouted. It was just Kira & Jenny & they hadn't expected me; I hadn't wanted to come & I wasn't wanted! Or well, they were fine having me there, but whatever. WHATEVER. I played with Olivia a bit & then I went home. Rotten mood was then assuaged with a bunch of superhero cartoons.

Young Justice was good! Doctor Fate as an old man-- I always want the JSA to be a bunch of old retired (or dead) heroes. Let them be a part of history. Also, Klarion the Witch Boy! I was happy he was a Lord of Chaos, but unimpressed with the voice actor. The magic was a little too "boring blue fireballs" for me, too, but despite my complaints, I enjoyed it a lot. After that I watched a DC Showcase special, Superman/Shazam!: The Return of Black Adam. It is actually a showcase of a bunch of short DC stories. "The Return of Black Adam" missed out by just having Black Adam be a thug, rather than a more complicated character, but I liked it, especially for having a brave Billy Batson. That was followed by a delightfully creepy Spectre short, complete with a seventies cop movie soundtrack for Jim Corrigan. That one maybe was my favorite. A Jonah Hex short followed-- as a Western, its femme fatale story arc may have been in-genre, but it left me cold. Green Arrow closed the collection-- a cute story with Merlyn, Count Vertigo, & Oliver proposing to Black Canary. All in all, a fun little collection. It hit the spot.

Saturday Jenny had to work, so I had the morning all to myself. For some reason I woke up at six-thirty, anyhow. Dumb. My cranky streak continues! I spent the morning writing about Oubliette & then I popped over to the gym. Did some cardio while watching one of the Pirates of the Caribbean movies-- those are often on during the weekends but I somehow always manage to see the same fifteen minute chunks. There should be a name for that, something like Baader-Meinhof. Focused mostly on my upper body-- I'd like to go back today, actually, if I can find the motivation. I like the military press better than the straight up bench press, but you've got to mix them up. I'd like to do one of each every week-- that isn't crazy, right? Then I came home just in time to meet up with

ranai! She is in town for a week & that is good news. I really was just wiped out when she got here-- all sitting on the couch clutching a pillow. Hi, I'm a load of fun, ain't I? I gave her a "welcome home" beer & then we went to the Park Slope Ale House. Catfish & crab cakes, that is what we ate, & then we came home & played some GoldenEye. It is frustrating that the only single console multiplayer options are competitive-- I wish we could go online or fight computer opponents cooperatively. Jenny came home to say hi to Danielle, & then Danielle left for a part, so Jenny & I could sink into doing nothing. First up was Parks & Recreation. Yay for April & Andy, yay for Ron Swanson, promotions all around. Then 30 Rock, with a strong showing, parodying nanny culture & with a heartwarming gigolo conspiracy. After that we popped in Fringe, & finally remembered that oh hey, we needed to eat. Food was a pizza & a cheese steak from Peppino's, & Fringe was good. I really think it is best summarized by asking: did you like X-Files? If the answer is yes, then I'd give Fringe a spin. That brings us to this morning, where all I've done is survive the zombie apocalypse in Rebuild. 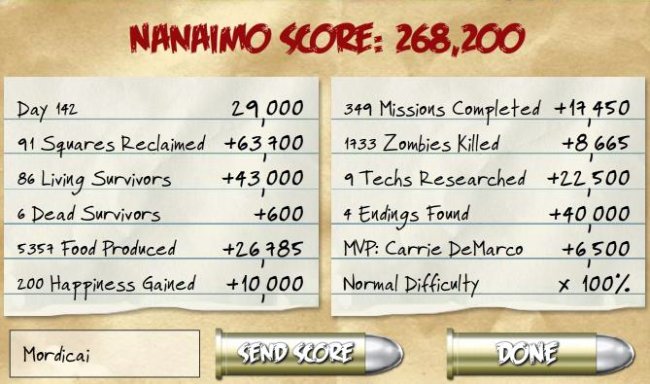