So I didn't end up going to hibachi on Lupercalia, as I thought I would. Instead the whole crew went to Blue Ribbon Sushi at Kira's behest, which is where Jenny proposed to me. Well, let me back up a bit; after work I got home &

elladorian texted me saying "is now too early to come over?" I said no, but was a bit puzzled-- I thought we were meeting at seven!-- but apparently I'd been left out of the email chain, since it was a secret email thread initially, talking about the beers Jenny had bought me. Jenny came home right after David & Maggie arrived-- early!-- & she was followed by Kira & Nino & baby Olivia. I hadn't expected Nino, or the rest this soon, but I was ready to roll! We cracked open some of the beers & had a tasting. First up was the Professor Fritz Briem 13th Century Grut Bier, which is one of Jenny & my favorite beers. Just so weird; it is from before they used hops in beer-- it is an eight hundred year old recipe-- & so the brew is stabilized with like, carroway & other herbs. The Aecht Schlenkerla Eiche was next; I like smoke beers & I figured that we would just drink dark beers afterward, so it made sense to go in palate order. Sure enough Bayerisher Bahnhof Porticus was next; nice, but not mind blowing. The Lagunitas Imperial Stout was pretty solid, but again, nothing that knocked my socks off. Our appetites thus wetted-- & Olivia sufficiently played with-- off we went. Hibachi was too crowded, so while Nino & I were off retrieving some baby supplies, I was informed that we'd be going to Blue Ribbon instead. Don't mind if I do! I had a sushi & sashimi combination, which was very good, & a flight of sake-- if I'm not mistaken it was Matsu No Midori, which was very acidic & great, then Wakatake Onikoroshi, that had a very green apple taste, & then Blue Ribbon Daiginjyo. At least, I think those are the ones I had; I tried to pay attention, & have sussed it out with the menu, but my Nihongo is very rusty-- I only trot it out to talk to Chikako these days. Jenny had the bone marrow fried rice-- yum-- & we all split a load of appetizers that Kira ordered. Your oshinko pickle platter, your rock shrimp tempura, age tofu, nasu shigiyaki eggplant & then some lotus root. Kira & Nino each got sushi of various stripes, & Maggie got vegetable tempura...& David got fried chicken. To be fair, the honey wasabi sauce was pretty amazing, but he confessed later to having food envy. & then that was it! Tucked into bed by eleven! 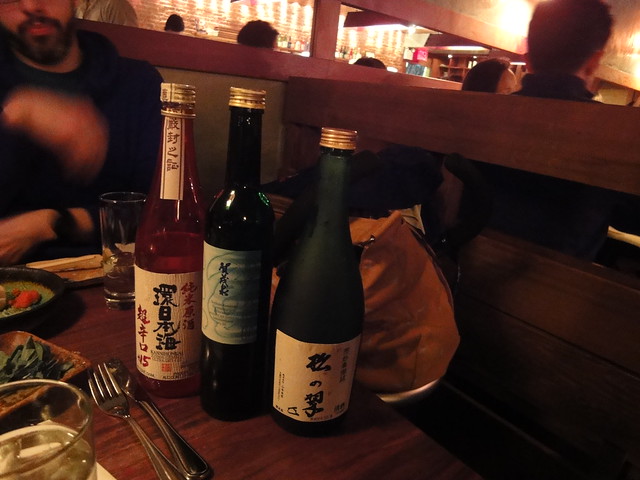 Tuesday was much more relaxed. I came home after work, fooled around online, & went to the gym-- Jenny met me there. I've been using the...uh, the curl stand? That thing you crouch your body around to do curls, to isolate your muscles. I wonder about it-- but I've been using it, anyhow. I am still stuck on the seventy pound curl bar; the eighty is just a bridge too far, for now. I benched, did a chunk of cardio, & watched the robot on Jeopardy. I instantly intuited how it worked, & then later I read that I was entirely correct. After the gym we stopped by the grocery store, picked up some supplies, & then Jenny grilled up some steaks & asparagus for dinner. We watched the new episode of Castle, which was another strong entry, once you suspended your disbelief. I like Castle for not pretending to be a plausible police procedural, so I don't mind excusing the fact that Castle was allowed to tag along even though he was clearly emotionally invested in a harmful way-- though I would have liked a line about how he supported Beckett when she was emotionally invested in her mom's case, or something. Again, Ryan & Esposito were perfectly used, & have become two of the strongest supporting characters on television, if you ask me. After that...well, it was already ten o' clock! Bedtime o' clock, more like, but I pressed onward to watch Young Justice. That show is...good. I might not recommend it to everyone, but if you have even the slightest interest in comics, you'll probably like it a lot-- it is a worthy successor to the many DC Animated Universe shows. The bad guy this episode was Cheshire, & she was great. I've never been so excited to see Cheshire! I think the recent Teen Titans series did a great job with Cheshire, & I'm glad to see that Young Justice is, too. I kind of hope that the second season is "Revelations" or something, so the team can be full of the "dark secrets" that their comic counterparts have-- Superboy is a clone of Superman & Lex Luthor! Miss Martian is a dreaded White Martian! Aqualad is the son of Black Manta! Artemis is...I'm guessing Artemis is an ex-League of Assassins Shadows trainee? Then finally into bed for me.
Collapse