The Emperor smiled;
the Angel opened her mouth.
Hell followed with her.

I've been a fan of Kris Kuksi for several years-- even using photographs of his sculptures as props for my roleplaying campaign-- so when I heard there was finally going to be a book of his artwork, I rubbed my hands together in maniacally glee. That really is the feeling he evokes in the viewer-- fiddle while Rome burns? Don't mind if I do! I didn't go to the book signing the other day, but that didn't stop me from getting the book. When it arrived & went around showing it to my co-workers; the universal response was oohs & aahs, followed by a look at his webpage for more. "He's like Gustave Moreau with tanks!" is what Brad had to say, & that is right. Kuksi's striking works are predicated on a symbolist obsession with detail-- & a transformation of classic archetypes. Sometimes, it cuts deeper to the quick than what we accept as modern interpretations of myths-- if you ask me, an angel with a tank turret for a head is a much more genuine portrayal of a creature that starts its monologue with "fear not" than any little putto. I didn't intend to let the nit-picking part of my brain engage as I looked through the book, but I confess to a little thrill of glee when I recognized Saesee Tiin's head on "Gertrude von Howitzerhen" & a nothic miniature in "Bodhisattva" (66, 93). Kris Kuksi must be a great guy to have patronizing your hobby shop-- I bet he has an amazing Warhammer 40k army. 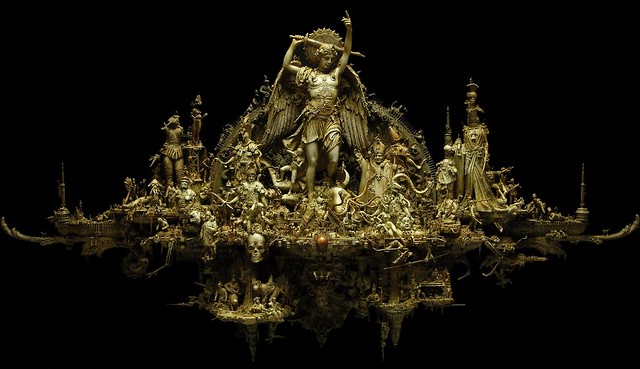 Edbury: "The amount of crush I have on Vriska makes me uncomfortable because you are married."