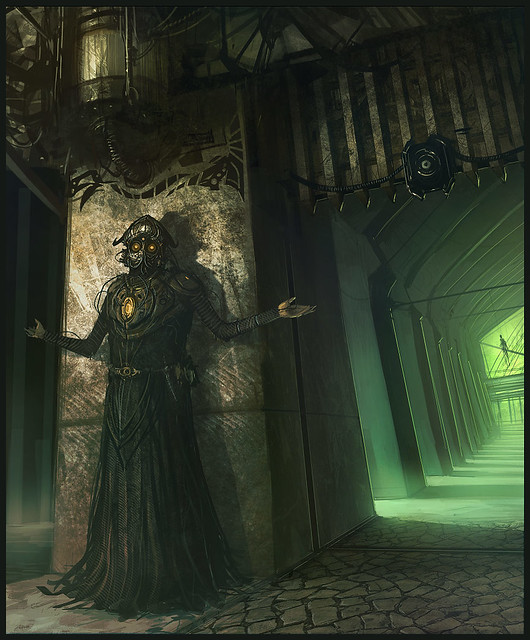 Yesterday was the continuation of my Oubliette campaign, & it was a good session, if truncated. Sam & Tracey were both feeling under the weather, & Radarless had already called out sick, too. Everybody's bones are disintegrating! Tracey & Sam were troopers about it, though-- they had me pick up some painkillers on the way over, but the pressed on! Radarless being out was actually alright, since he hadn't been able to make any of the Aubade sessions so far-- no big deal, as long as narrative continuity is maintained, right? We only got through about half of the stuff I'd prepared for the game, because Sam sadly got a call from work in the midst of things. What he thought would be a fifteen minute fix ballooned into a bigger project, so we had to cut it short. Hopefully, we'll finish the other half next Sunday? I was pretty pleased with the pacing, though-- it was coming along nicely, I thought. Pacing is, of course, the thing I struggle with most. After the game,

toughlad & I hung out with Tracey for a bit, talking a bit about Character Traits, & then I bounced. James listened to me wax nostalgic about Shadowrun at the bus-stop, & when the bus came I called him to finish the anecdote. When I hung up, I realized I'd been talking about drug use, murder, & cannibalism pretty loudly while i was alone with the bus driver. Funny-- at least to me. 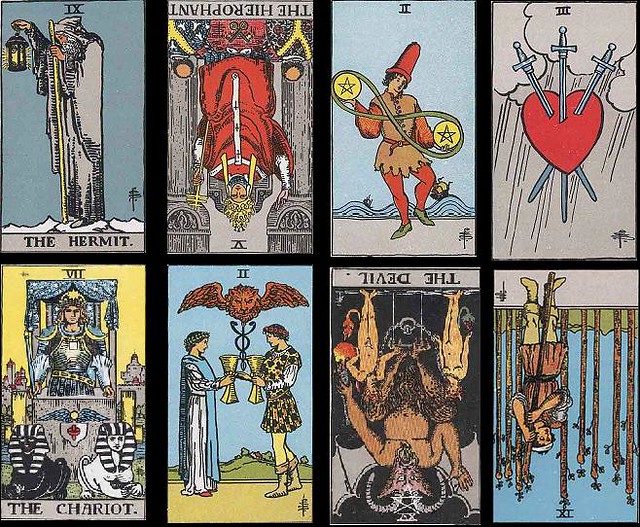 We started with a recap of last session. I made a point of noting that Curie First-light had performed elective surgery on himself, installing an access plug in his hand. Being a cyborg, that is what I consider something worthy of mention. "Blue Glory on Dark Waters" found that she had a dual citizenship set up for her under the name Descartes Midnight. The blimps that they'd flown in were in fact "heavier than air," & held up by a material called cavorite, very similar in a lot of ways to Curie's [black element]. Currently they are traveling with Coyote's Lucky Day, a mysterious Karnak with a golden eye that he hides under a patch. Most of all, we went through the tarot card reading that the Chimera Gödel Dinnerbell had done for them, including some occult rolls to figure out what the "future" cards had signified. Sorrow & loss for Descartes & ill-balanced humors for Curie. Hm, how very interesting.

We got into the game with a little fast-forward; just a jump! The heavier than air vessels had docked at a tilted ruin, & shuffled them all on-board. The building gave off lots of mixed clues-- it was slanted, requiring everything be done a-tilt, but also seemed to be made of incredibly old technology-- lights & gurgling music occasionally coming from the walls. There were definately signs of multiple layers of panhuman occupation--most recently the Arcanum had spent a fortune furnishing the place with walnut wall paneling & lush carpet, but there were older slate walls below that, & signs that the bare bulkheads had once been serviced as a dwelling, after the building? or ship? had crashed here. The cockroaches were expected, but the flocks of canaries playing in the metal girders & rafters were the legacy of miners, & the albino mice were evidence of theosophic experiments & laboratories. The party was held in a "Waiting Room," & fed sweet pastries & strong bitter coffee-- coffee & doughnuts is what you get in the Waiting Room, Gene Wolfe taught us that. After a few days, a Gleaner representative-- Guild Journeyman Musgrave Thirdshift, pictured above-- came on Curie's behalf to act as a solicitor. He (speaking through the mask of his suit) informed them that their animals were being looked after, & that the gears of bureaucracy were turning on their release. He & Curie spoke of his father's health, & then Musgrave took his leave. 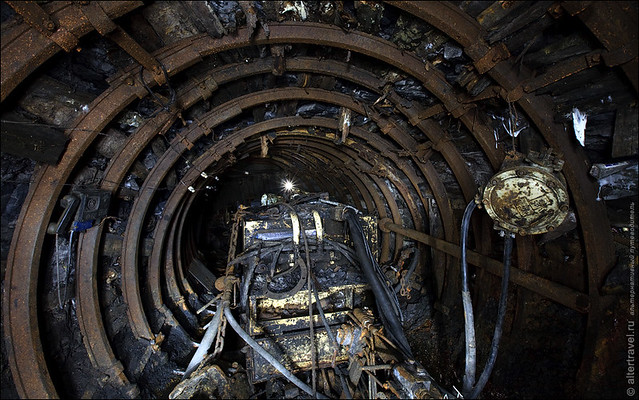 Earthquake-- it is Coyote's Lucky Day who notices first, followed by Descartes, but even Curie is shaken from the cogs turning in his mind when the first BOOM echoes through the walls. Curie does some mathemagic to figure out that the booms are coming from here-- they are being shelled, or bombed! The smoke creeping under the door smells like rubber, & that means it is time for them to make a break for it. Now, the Waiting Room is a prison-- a nice ad-hoc prison, but still! So I give them two checks to make, both at minus five-- a Mechanics check made by Curie unlocks the automated part sealing off the room, but Descartes is having a hard time with her Larceny check to open the physical component. Smoke is billowing in, & they start making Stamina + Survival checks not to suffer from inhalation. Eventually Descartes trips the lock & Coyote's unfailing survival instincts kick in-- he even has a specialty for "Fleeing!" The fresh air he smells is coming from...here! A manhole cover! The pull it back & see a ribbed shaft descending into the earth. A drill shaft, cutting through layer after layer, breaking through ancient sewers, ducts & ventilation shafts that are so old they've sunk into geological strata. Down they go, a Mount + Trump check almost as an after thought. 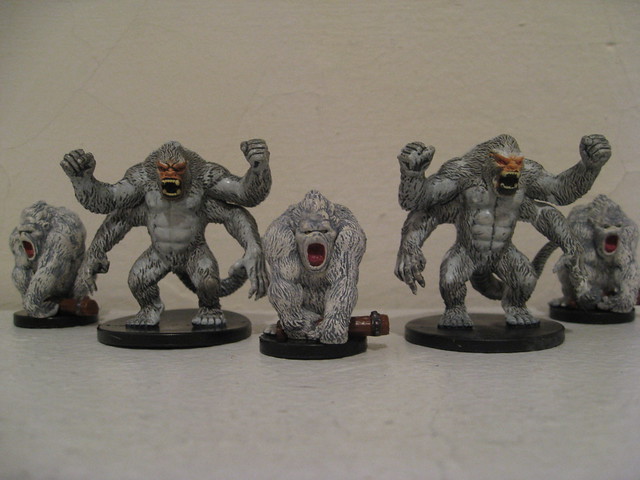 Climbing down the shaft isn't easy, but it has handholds & Descartes is a master climber; she has gear & know-how, & Coyote just starts doing Jackie Chan controlled falls. No problem...until these white primate-like creatures come slithering out of some small tunnels. They are...like apes, except for the webbed fingers, & the single horn on their head, & the...holy crap, did that thing just glide like a flying squirrel? You bet it did! The party fights & climbs downward, making a good showing. Coyote hits the ground first & sees...different, bigger ape like things. A further mutation? A phase in their development? The larger white apes are horned, like a narwhal, have prehensile tails, their backs are covered with quills like a porcupine...& they have four arms. Or six legs. They are like Gnoph-keh, in other words. The fight was interesting-- first, Sam screwed his character by reminding me that they were all tied together, which is something I like to reward. Have a point of Willpower! Secondly, having a high Defense & taking your action to go Total Defense is a very sound tactic-- Coyote did it while spending Willpower, which was intense, & Descartes did the same. You know, I think the fact that Descartes has a Defense of Four is...really impressive. There are more apes on the way, & they can't just sit there & dance with the enormous four-armed bear-apes, so they run...& waiting just down the tunnel is a huge menacing figure all in metal-- a Gleaner in an antique suit! 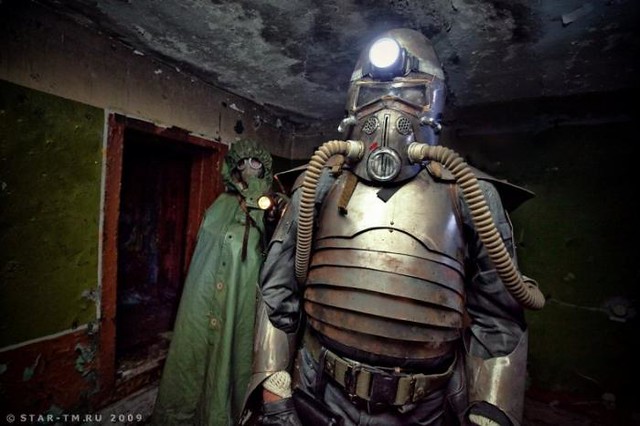 (The Gleaner; "Brotherhood of Steel Cosplay" by Pilshikov Sergei.) 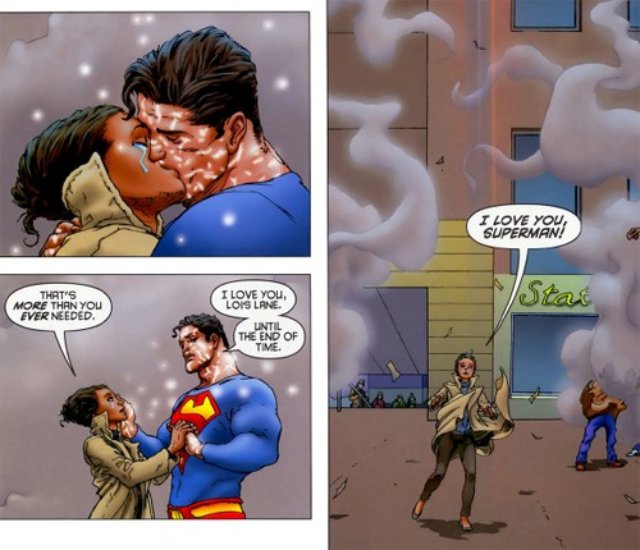 I didn't expect it, but Jenny totally surprised me with a Valentine's Day gift. Several, actually! Let me back up a bit, to try to run down the build up. Sunday Jenny & I watched Catfish, which I ended up strangely liking a lot. It had been marketed as a horror film, if you recall-- but it wasn't. Not even ten seconds of it are scary. I had spoiled the mystery of it for myself, but even so, I ended up liking it-- the guys are just...likable, I guess. Sure, they are kind of foolish twenty-something hipsters, but that is okay, especially when you are young. They are ultimately decent, & that counts for something. We ordered bagels-- lox spread! & Jenny got capers-- & then I was off to run my game. I ran into Kenneth & his dog Claudio on the way back-- or really, since I've known Claudio longer, I guess Claudio & his boy Kenneth-- & picked up some pizza before hanging out with Jenny. We watched the end of Saturday Night Live-- Russel Brand was surprisingly charming, for one. I used to hate him, but married life suits him. As does being friends with Helen Mirren. Chris Brown was on as the musical guest, & sure, I like watching him dance, but he beat up Rhianna, remember? & then never apologized? & then acted all hurt that no one accepted his non-apology apology? Eff that guy. We watched a chunk of the Grammys, too-- suffice to say, Janelle Monae is awesome. I mean for real, 'nuff said. 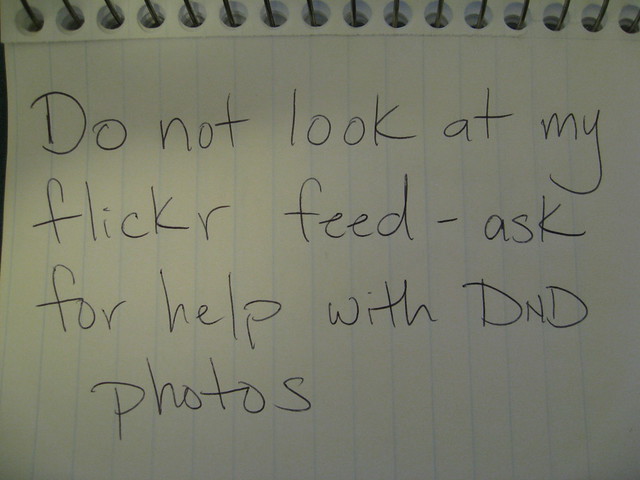 Jenny told me when I was taking pictures of minis for my game re-cap not to go digging around in her Flickr-- so I had my suspicions. In fact, she'd filled her account with the above image, to hide whatever might be behind it. Fair enough, I'm a sport, I don't cheat. Now, I'd already bought & wrapped her gifts-- a poppet reading a book & a stone dagger with an antler hilt-- so I was set. Then this morning while I was in the shower Jenny snuck out of the bedroom (I heard the door open, since I'm a ninja, but just figured she wanted in to the bathroom) & set a pack of papers on the laptop keyboard. I saw it later-- sneaky!-- & it was a candy bar, some strange notes about beer, & a card. The card is very nice-- romantic!-- & the chocolate is dark with spicy pepper flakes, which is what I like. There is also a notebook for taking down thoughts about beer! & the kicker of course is the eight bottles of fancy beer she bought me. Well, me & her-- there are dark stouts for my palate preferences, & sour beers for hers. I am super excited. Tonight we are going to hibachi with

elladorian, as well as Kira & baby Olivia, & they are going to come over first, so we can have a tasting! 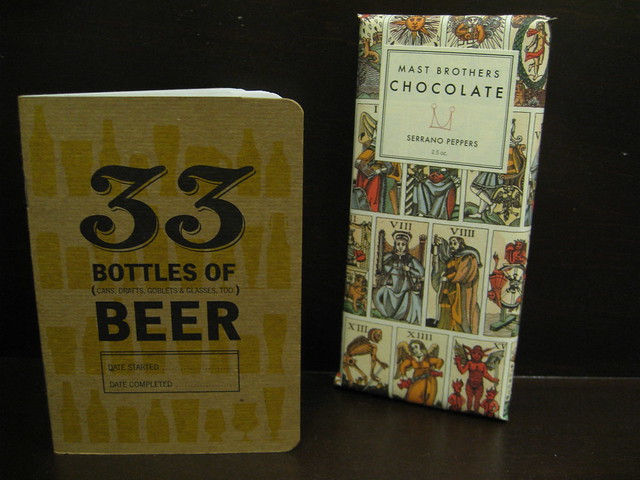 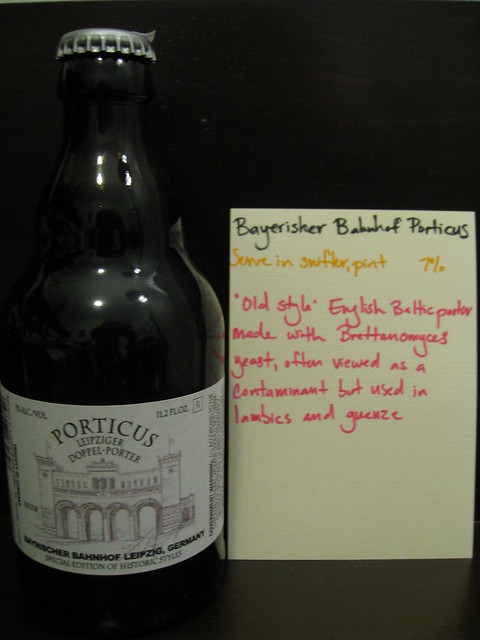 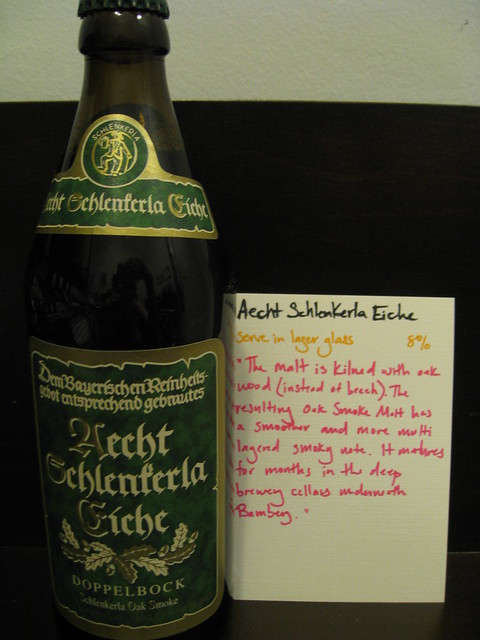 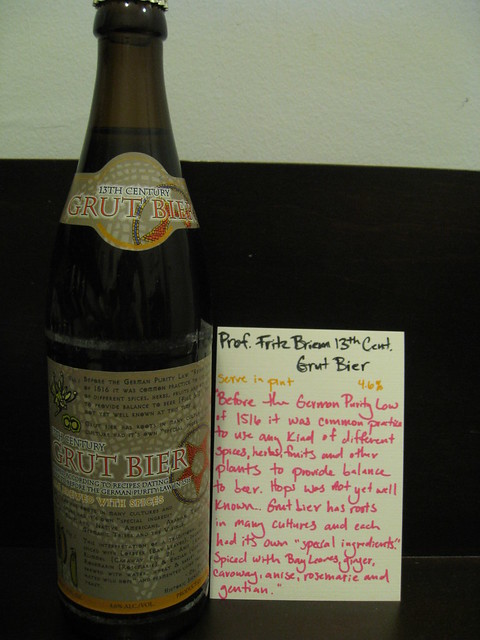 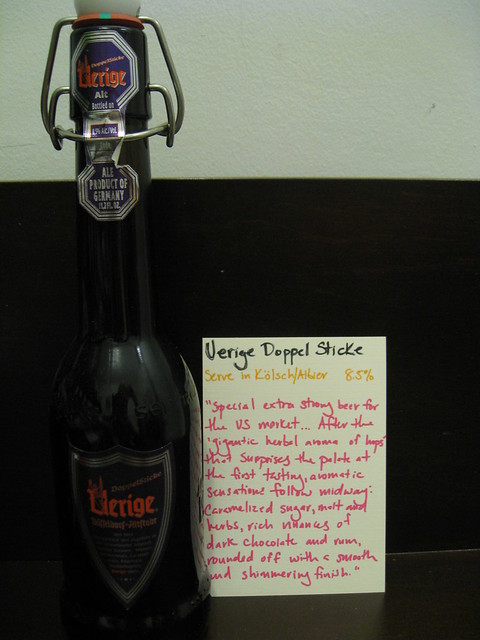 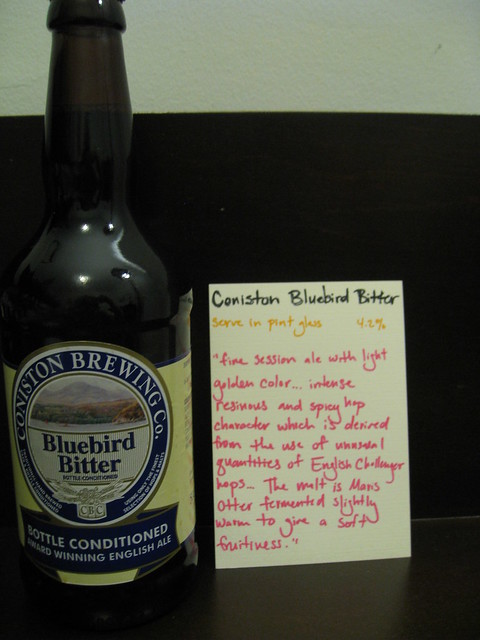 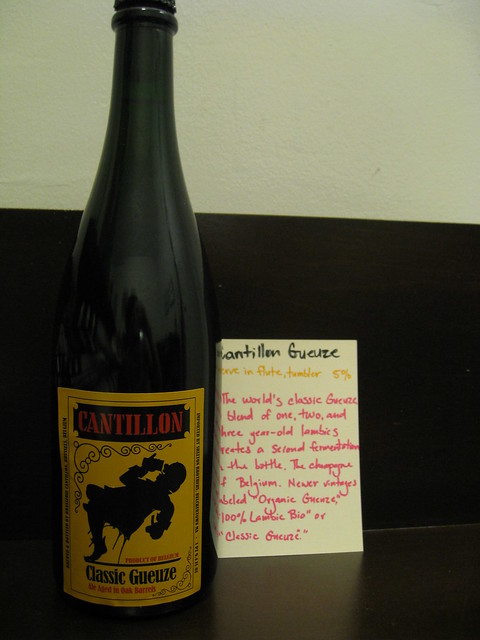 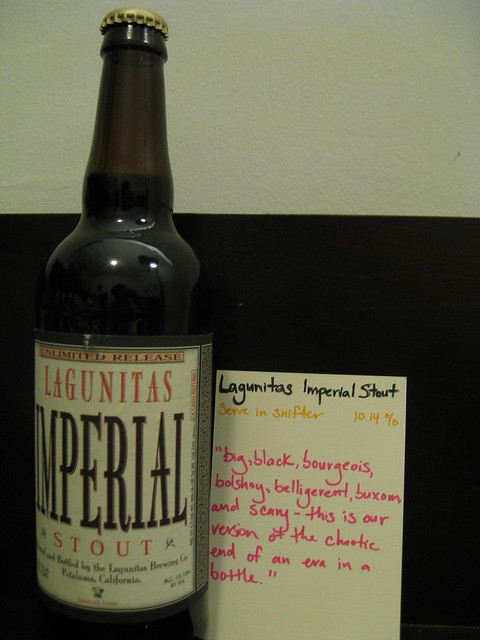 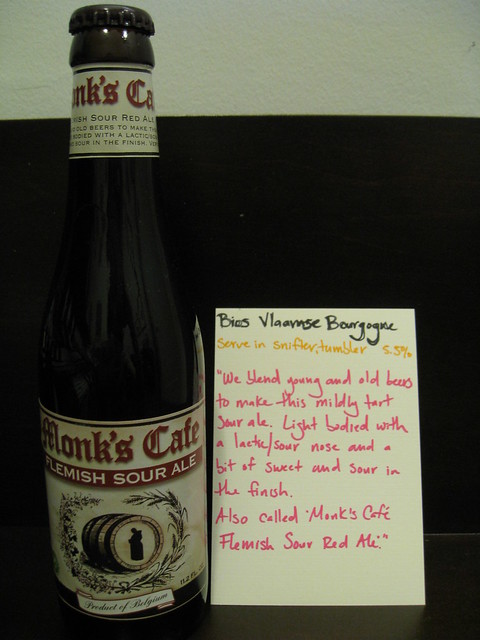