A handful of stars
shine naked between fingers
invisible, soft.

I have to say, this is my favorite of the Lankhmar books so far, & by a wide margin. The two thicker novellas in this collection both really knocked my socks off, both for the concepts tossed around, the strength of the story, & the writing style. Very impressive all around-- or I should say top to bottom, since the first story, "Stardock," deals with ascent. Literally-- it is a story about climbing a mountain. That right there-- Fafhrd & the Gray Mouser climb a mountain-- is enough of a pitch to tell a hell of a yarn, but now we've reached a point where the overlapping layers of the serial story have sown a grand harvest. Fafhrd was raised in the cold north of Erewhon, son of a mountaineer. Are the conquering the peak that claimed Fafhrd's father's life? No! They are claiming the peak next to it, the bigger one! Of course. The climb is stressful in the best way-- taut writing, & sprinkled with unexpected touches. The snow leopard comes with them? Alright. The tale peaks with the Invisibles, the transparent people of the mountain...the princesses of which Fafhrd & the Gray Mouser sleep with, of course. This isn't wenching, though-- the girls are character, & the power dynamics aren't slanted. Plus, one covers herself with lace & a mask to sleep with Fafhrd, & one covers herself in green paint to sleep with Gray Mouser, & both of those options are kind of hot. The collection ends with "The Lords of Quarmall," another long piece, that is strong for a host of other reasons. Here, Leiber's worldbuilding is on display-- the arcology kingdom, all below ground, fed on mushrooms & rats, air circulated by fans attached to treadmills. Despicable characters for Fafhrd & Gray Mouser to consort with & ultimately overcome. Weird details, like the diseases inflicted on one of the wicked princes, or his conditional telekinesis. In this tale, our heroes are kept separate, & we're denied their camaraderie, but that allows a mirroring that really hits the spot. Fafhrd's bravery & strength & Gray Mouser's cunning & skill...gets them both the same thing, more or less, & just as fast. Just a whole lot of fun; I really think the series hits its stride here, though again...who knows what year these were written in. In fact, let me check: 1965 for "Stardock," & "Lords of Quarmall" was written in 1964. 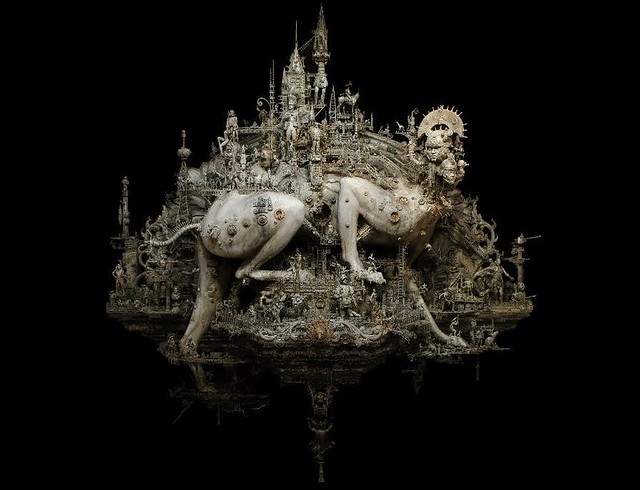 My big plan today was to go see a Kris Kuksi exhibit & then buy his book & have him sign it. Not a bad plan, since he's clearly brilliant. I couldn't really find anyone to go with me, but I was prepared to go alone. Eventually, Brian & Jocelyn said they'd meet me there-- swell!-- but then they noticed that the gallery didn't have anything about an exhibit, so I called them up. Drat! They were right, it was just a book signing. That seems weird to me, since the gallery in question represents him, but okay. I don't really care about the cult of celebrity-- a signed book? Okay, I guess?-- so I decided to scrap it. Instead I blurbed the book I finished last night, fiddled around with my blog's navigation bar, & did some game preparations for Oubliette tomorrow. Lazy, & yes. That was a good plan. Made some small talk with the exterminator, doing his monthly spraying, & ordered breakfast & lunch from Bagels by the Park. Last time I ordered from them I bemoaned that ordering lox meant you got too much lox, but today I ordered the "lox spread" & instead of special cream cheese, it was just the right amount of lox. Okay! Then I went to the gym-- that counts as doing something! I was there for an hour & twenty-five minutes, but I confess that a big chunk of that was cardiovascular. Superman II was on the television, what do you want me to do? Jenny met me there, & then after her work out we came home, & now she's cooking up the stuff I got at the grocery store today.

Last night after work I went to Bua with Matt & Brian, & we met Kat & Jocelyn there. I've heard of Bua a lot-- Andy knows the owner-- but this was the first time I finally got my act together to go there. I had a nice time. The beer selection was modest, but there was some stuff I hadn't had before. I had a Blue Point Winter Ale, which was nice-- it suited the weather, & I like a thick spiced beer. Jenny showed up, & she ordered one of their cocktails, a shandy-- man, remember when we drank shandies all the time? I was happy Jenny came-- all my co-workers are extroverts, & I don't think they believe that Jenny likes them. She likes them fine, she's just an introvert! Jenny & I had dinner there, & it was pretty great as bar food goes. Actually, it was just good, straight up. A corned beef sandwich & a trio of pulled pork sliders, both of which came with a good mustard & a side of pickles. The pickles were good-- one set was spicy cucumbers & another was beets. I also drank a Duvel Green, which was fine, but didn't knock my socks off. After that we split from the crew & came home to watch the season finale of Human Target. I was really happy with the way it mirrored the season premier; well done guys. I hope it comes back for another season. & then that was it. Our upstairs neighbor woke me up listening to terribly music at three AM, but whatever. Oh! Now I'm drinking a River Horse Oatmeal Milk Stout, which I like! I have never heard of Water Horse before, & I was worried this would be more oatmeal stout than milk stout, but nope. Good! & also, Boing Boing had a meme about trying to draw a bicycle from memory, & it turns out...I'm pretty good at that! 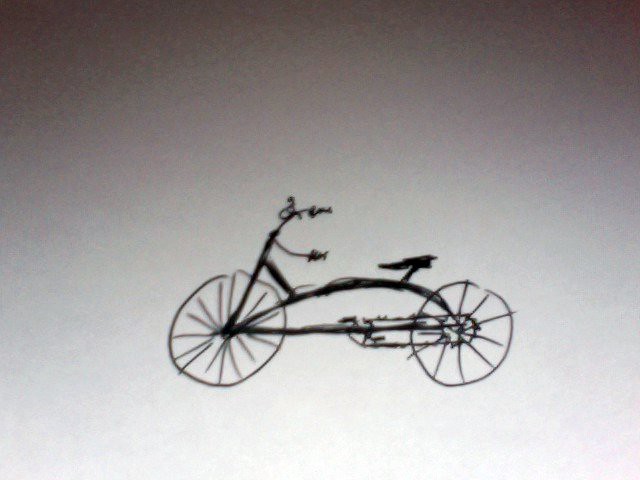