We are getting somewhere on the riddle, finally. The scraps of paper are intelligible clues. A few mistakes, but a few good guesses, on my part. I thought perhaps Hebrew, but discounted it-- it turns out I was right to think Hebrew! It is just handwritten Hebrew, which I don't have a lot of experience with-- all I know about is just enough Hebrew text to wade my way through occult tomes & notice what is going on around in the margins or in the original. That is to say-- nothing practical.

wolvus came to the rescue first, followed by people on Aardvark, particularly Yoram & Dvir. Leigh & Aviva helped out a ton as well. One of the fragments I'd positioned upside down, & the "upside down" version I posted was useless-- I just vertically flipped it in MSPaint, rather than rotating it 180° as I ought to have. Still, we worked it out, more or less. As near as we can figure, it reads one of these things is not like the other. אחד הדברים האלה הוא לא כמו האחרים; Ahad hoo lo cimo ha-deverim ha acharim, as Leigh says. Now, I thought at first it might be referring to the "CNI" fragment, but then I figured out that was upside down, & part of the saying, so now I'm confused. Well; I have one theory, but I'm going to keep it private. It is worth noting, however, that Jenny has also said that she is definitely not behind it, so I shouldn't get my hopes up for a Valentine's day surprise.

Peter/Alicia: ומט 'Mate'; Yoram: CNI; Leigh: written wrong - the last character is not a letter; Dvir: כמו: first word was upside down -- like

Peter/Alicia: האלה 'These' or noun. Yoram: Those; Leigh: these; Dvir: these

Peter/Alicia: האחרים 'Other'; Yoram: The other; Leigh: the others; Dvir: the other 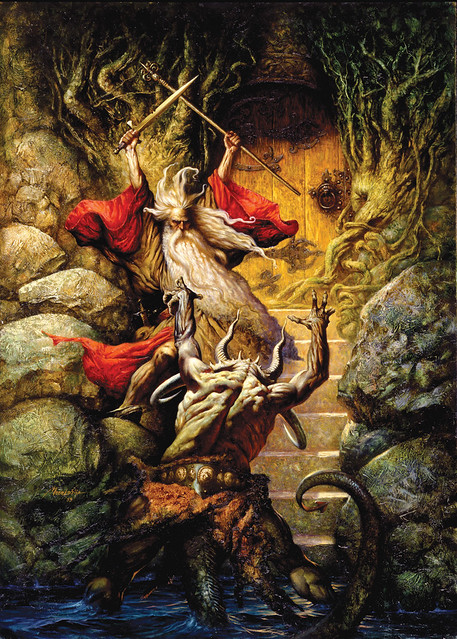 Bloodbath at the sushi restaurant! I went out for lunch with Matt & Kat & Brian & Jocelyn-- we went to Azuki, where ten bucks will get you soup, an appetizer, two rolls, & sake. A very nice time was had by all, I like to think. Then-- gangland. Rachel walked, put a gun to Brian's head, & bang bang...she assassinated him. At which point Nick, who was with her, pulled out his trigger finger, put it to her temple, & kaboom. One dead Rachel. Nick later ran up the flag of victory, which I'd seen in my in-box: "Nick Courage survived. Await further instructions." Slaughter. What else? Well, we got tickets to go see The Mountain Goats with Marie on the 28th, so that should be fun. We saw him twice last tour (or the tour before last?) & were underwhelmed, but the first time we saw him was just...perfect. One of the all time greatest shows. I'm excited. Otherwise? Nothing but the usual.

fordmadoxfraud gave me a couple of comics-- Avengers, which I liked because it is about the Infinity Gauntlet, & New Avengers, which I didn't like because the art stunk. Went to the gym last night-- finally-- & had an okay time, & I think I might go again tonight. Watched the Valentine's Day episodes of Community, which was great for "First, this is the cutest thing that has ever happened to me," & 30 Rock, which was its usual jolly self. & that is just about it. I kicked a lot of ass in the office today & powered out a bunch of work, & I'm ready for the weekend.
Collapse