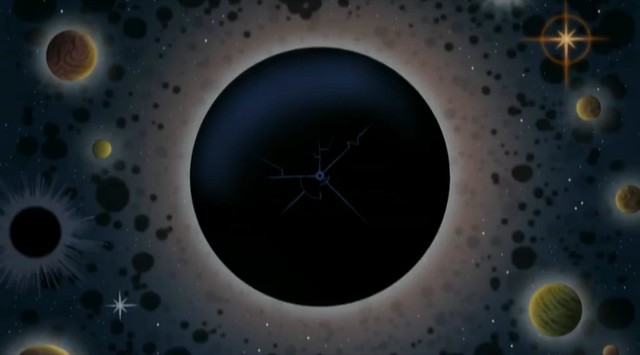 What have I been doing? Existing, I guess. The sublime nature of Being. Or whatever. I was sick over the weekend, & that really hasn't left my lungs; I'm sniffling & clearing my throat constantly. Frustrating. I haven't been to the gym in a week, trying to give the old bag of bones time to heal up, but I think I'm going to go tonight. Sorry, ape-Mordicai, jiva-atman, but I have to put you through the paces. If I don't keep the biological machinary well oiled, flush with endorphins & strength, well...then the meat starts getting cranky. Sadly, being sick sort of encapsulates what I've been up to. Monday we watched Glee-- why was the light mixing so dark?-- which was alright. The "redemption" arc of the bully isn't very engaging; I guess I'm rooting for him to be in a car accident or something. At least there was a mash-up; as far as I'm concerned Glee succeeds when there are mash-ups, succeeds when they focus at least partly on Brittany or Kurt, & fail when they don't. We might have-- must have-- watched something else, but who can say. Tuesday we watched Castle, & that was it. A fun episode; just a good example of why the show succeeds, as far as I'm concerned. Chemistry-- romantic & otherwise. Especially otherwise; for example, Detective Esposito plays his "firsts" when he picks numbers for the lotto. First kiss, first time having sex, etc. His partner Detective Ryan...also play's Esposito's firsts. "That way if I win, we both win, split the money, & it isn't weird." Oh my gosh, adorable. More Molly Quinn though, please. Though...that sounds creepy. I finished my book & then went to bed.

Television Night was last night, featuring the usual suspects of (in order of appearance): me, Jenny,

comeuppances. Last week we started Celebrity Mole, & so this week we continued it. Well, we watched one episode, anyway. Sarah's roommate was locked out, so she had to leave after it. Jenny & I sort of bickered, but we got over it. Sickness, grumpiness, on both our sides. David brought some fancy Belgian beer, but I neglected to catch the name. After the reality television, & after laughing about Archie being weird, we put on the Valentine's Day episodes of How I Met Your Mother & Modern Family. Both were...really great, actually. People dish on Ted, but I think that is short sighted-- he's the straight man on HIMYM. Sure, he's a huge dweeb, but that is the whole point. Anyhow, regardless of anyone's feelings regarding Ted, or Zoe, the end of this week's episode had everyone saying "aw." It was really well paced, the viewpoint changes were great, & Katy Perry didn't ruin it. I saw a glimpse of the old How I Met Your Mother in there; if they have the guts to change up the status quo-- like say, getting Ted & Zoe together & Barney & Robin coupling up again-- there may be life in it yet. As for Modern Family, it is a show at the height of its game, & this was no exception. All of the plot lines were adorable-- well, maybe Manny & Haley wasn't well recieved, but everything else was. Poor dumb Phil has gone from being loathed by everyone but Maggie, to being a favorite. Jenny likes to insist I'm him. I'm not-- I'm a dork, but I'm not. I think she's just mad that Ellie from Cougar Town is a dead ringer for her. Anyhow, the ending, with Haley running out to Dylan-- perfect. 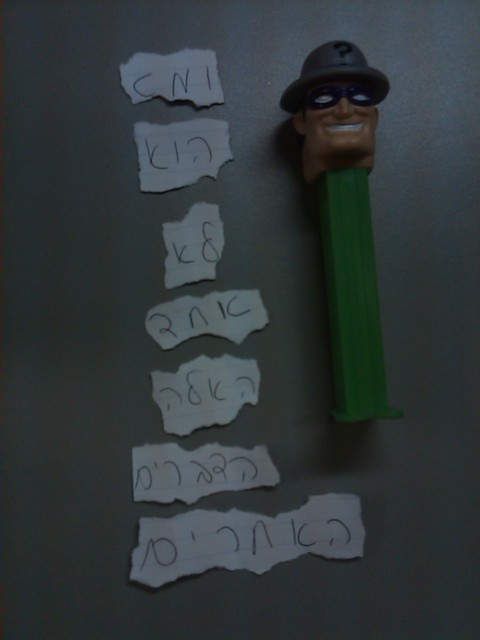 It seems "the eye" is up to their old tricks again, after a day without any clues. Today it was an interoffice envelope, previously belonging to accounts payable. There seem to be two main styles of handwriting-- one set loops the corner of their "twos" & one set has a sharp edged "two." The envelope was lined with two pieces of paper, which appear to be there only to shield the envelope's contents-- but maybe I'm missing something. The contents were scraps of paper, & a Pez dispenser in the shape of The Riddler. That makes me think that perhaps the scraps of papers are clues, rather than just a prank. The only person I know who has a connection to Pez is one of the executives on the floor-- while "a prank" would totally be in line with his personality, from what I understand, I don't think pranking me would be. Maybe I am wrong, & my paranoia should cast a wider net! The scraps of paper seem to have some roman characters-- C, N, n, I &/or l &/or 1, a cursive f, a 2 with a loop-- but other characters don't make any sense. My first instinct was that it was Japanese, but they aren't hirigana or katakana. Hebrew? That one shape could be a ה right? The rest don't match. It isn't the Voynich Manuscript script either. The paper is lined, which gives a sense of lateral writing, & the edges don't line up, so I don't think it is a puzzle. Still, I'm stumped, at least for now. Maybe I'll ask Aardvark for help. Any suggestions? Thoughts? I roughly transcribed them, then flipped it vertically to see if a perspective switch would help. It didn't. (Again, thanks to Kelly for evidence photography.) 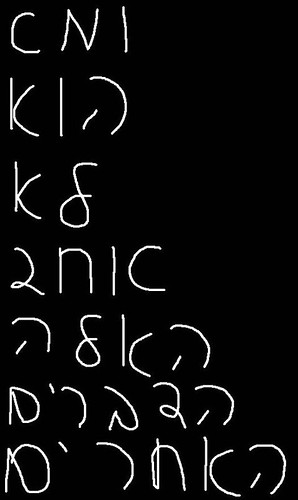 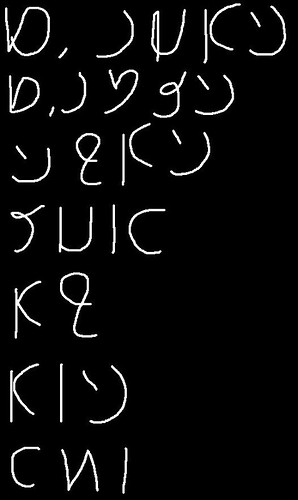