I got sick this weekend, & that pretty much threw a monkeywrench in everything. Jenny had sent me an email saying she had stayed home sick on Friday, & when I got home after work, I could feel that tight, sore feeling in my throat that heralded the oncoming cold. Nice try, lymph nodes, thanks for the attempt, but alas, I was felled by the Mouse-God's arrow. Cruel Apollo! I had planned on going to the gym, but that was not to be. I was too tired, & I carry my social responsibility too well-- the diseased should minimize they public exposure! Ethics. Sunday I was meant to run Oubliette; I'm supposed to play Dungeons & Dragons when the Superbowl is on. That is the way it was meant to be. Alas, The wound of Parnopius! Instead I stayed home & played lots of online multiplayer GoldenEye. I'm not great. My kills to death ratio is basically one to one. Still, it is a way to spend time. Mostly-- if it weren't for snipers, I'd do fine. I'm of the "run around" school of thought-- I'm a skirmisher, or in DnD terms a Striker-- & I don't do well with maps where a guy can just pick you off from a tower somewhere. That really was all I could do; I must have played twenty hours of GoldenEye this weekend. Jenny was sick as well, so she just stayed in Spare Oom & read. She even slept on the futon one night, since my clogged pipes were making me snore. That basically sums up my weekend. I chugged some NyQuil one night & had dreams of trying to get Cortney to be my friend again. I made an omlete with onions & potatoes in it, & also a plate of homefries...or in otherwords, more onions & potatoes. Both had a pinch of ghost pepper added into them. I finally finished the onions from our CSA, that is what I'm saying. We also ordered a whole mess of barbecue, & ate that.

What did we watch? I mean, we did watch some television & some movies together. Friday we watched RED, the retired spy flick with Bruce Willis, Mary-Louise Parker, Morgan Freeman, Helen Mirren, John Malkovich & Karl Urban. First, I found Mary-Louise Parker really attractive & compelling, & while I was worried that the "kidnapping hijinks!" plot would have a misogynistic slant, that wasn't really the case-- plus, Helen Mirren kicking ass sort of earns a film some feminist cred. Karl Urban was really good in it as well; it is funny to me that Éomer & Doctor McCoy are the same guy. Somehow. Anyhow, that was a fairly mindless but enjoyable flick. We also watched, I dunno, 30 Rock, which was good, & Outsourced, which wasn't. I wish I'd remember to tell the DVR to stop recording that. Human Target was good-- always nice to see Tony Hale, especially because now he doesn't resemble me & Nino-- he's still in our tribe, but seriously, I am glad that the "Mordicai & Nino look like Buster Bluth" meme has run its course. Sunday we watched Saturday Night Live, which was just a bunch of nostalgia sketches, since Dana Carvey was the host. What is he even promoting? Then at some point I told Jenny to cover her eyes, since I had a surprise for her, & we put on Dance Flick. It is just one of those dumb parody flicks, you know, but since Jenny likes genuine bad dance movies, I thought she might get a kick out of it. A mild kick was had. Oh, & we finally watched the rest of The Ten. 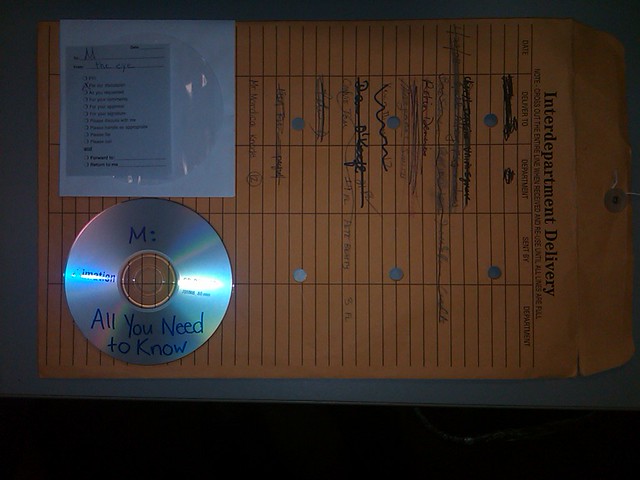 The riddle continues! Part of the reason I pulled my sick ass out of bed & into the office was to see if I got another communiqué from my Secret Admirer...& I did! A mysterious but dissapointing update. In an interoffice envelope-- storied in its travels-- was a cd slipcase, & a post-it note! The note was preform, & read:

O Forward to:
O Return to me

The "Per our discussion" bubble was x'd, which leads me to believe that I have probably accused the culprit of their shenanigans-- but of course, since I've suspected nearly everyone, that doesn't particularly help! Inside the slip jacket was a CD saying "M: All You Need to Know"...but the CD is blank. I checked, & nada, zip. Checked & double checked, even. Sorry, no joy. Still, I think I've figured out what my next move is going to be...(& by the way, photo by Kelly.)
Collapse