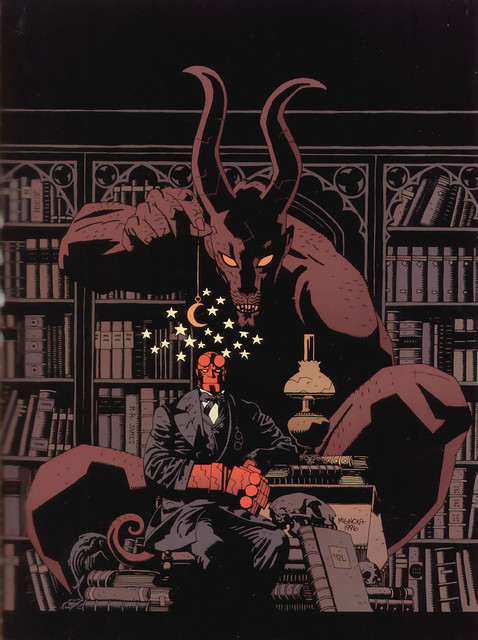 I've been thinking more about my ideas for Character Traits for the next iteration of Oubliette, & I am increasingly pleased with the notion. There are still major kinks to work out, though, especially on a practical level. Like-- how many dots worth of traits to give out? The rules in World of Darkness: Mirrors don't help on this regard, because they don't rate character traits. You just have "Ex Boxer" as a trait, the end. Then, when you invoke it, there are a whole mess of options...which seems needlessly complicated. If you just give the traits a rating, you have both a rule of thumb & a possible dice pool. You can say "Oh, you only have one dot of Ex Boxer, that isn't enough," or you can say "One dot will get you in the door to the underground circuit, but not in the ring," or you can say "Five dots in Ex Boxer? Hell, they'll bump the main event for you." & if the Player evokes it in a fight, you can go "You've got three dots, so add three dice," or whatever, rather than mess around with the somewhat awkward options in Mirrors. The book says that everyone should get five, end of story; using dots is a different kettle of worms. The two ideas I have in my mind right now are to either give dots-- "You get eleven dots to spend on Character Traits"-- or to give a staggered pattern, like the way Skills & Attributes work-- "You get one at four dots, one at three, one at two..." Typing it out makes me think a pool of dots is much better, though I wonder about people who might want eleven one dot Traits? Maybe I should say take five & spend the dots? Which begs the question, while we're at it, of Experience cost. Mirrors says a new trait should cost fifteen Experience points. Fair enough, but if I've got them ranked, then we're back to confusion. The cost of a Merit is times two, but that seems too cheap for the broader category of Traits.

Something exciting occurred to me the other day, which is that Traits don't have to be solely Character Traits. Weapons are the obvious thing that leaps to mind. In general, I like the very simple way the World of Darkness deals with weapons. Plus one, two, or three. At the fringes, I get a little unhappy-- a giant two-handed sword is slow & specialized & maybe shouldn't be a plus four, outright, you know? & the creep of the Armory books was largely a creep of needless rules complications-- if/then statements with rules for Nine Again rolls, etc. This came up with Tracey's character Tif'eret; she took a sickle because it offered Nine Again on called shots. Of course, the rules for called shots are pretty vague, so it is always sort of up in the air. I don't mind, though-- it creates a mini-game, & forces her to make choices in combat-- but there are some weapons & situations that just seem like pure hassle. Then of course there is the interplay between close combat & arms length fighting-- you can't fight the guy you are grappling with if you have a longsword, for instance. Anyhow-- I don't usually sweat it, but it occurred to me that giving weapons Traits might go a long way towards diversifying them, & making them unique & cool...or heck, treating them like Traits. You could use your "Two Handed Axe" to chop down a door, & then regain that point later in a fight by introducing the dramatic conflict that your weapon is slow. It provides options! I haven't really put too fine a point on that, but it came to mind & I thought it might be a profitable chain of thought. 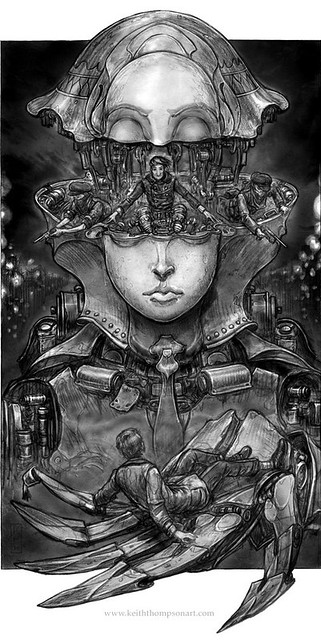 ("The Goddess" by Keith Thompson, from Behemoth.)

Another thing that has been bothering me about The World of Darkness' Storyteller System that I've been trying to think of a tweak to house rule for Oubliette is the lack of derived traits for the "Power" attributes, & Manipulation. Strength excluded-- Strength always speaks for itself, when you have a robust melee system. Presence & Intelligence, particularly. Almost else gets used somewhere-- Stamina is added to your size to determine your Health, Composure & Resolve are added to each other to figure out your Willpower, & the lower of your Wits & Dexterity is the value of your Defense. I like the derived traits, & I think that they force a Player towards a well rounded character...& it bothers me that three of the nine get left out. This is like Dungeons & Dragons Third Edition all over again-- Charisma was left out in the cold, & it always bugged the heck out of me. I have run a few ideas through my noggin trying to come up with a solution-- Magical Defense based on the lower of Presence & Intelligence, for instance, or a Aura of Manipulation plus Presence in which your various social acumen takes effect...nothing satisfactory. I've thought of whole new Attributes-- what if there was a Weird derived trait? Maybe, but what does it do that Willpower can't do? I haven't come up with something I like, more is the pity. Just something to mull over. How to make a top-down change that will make the bottom-up character building experience a little better. Derived Humanity? No, that won't do. Speed? Doesn't make sense to use any of the given attributes. I've got nothing. Maybe I could determine how many Character Traits you get that way? Nah, that seems inelegant, since nothing else in the system works that way. So I think, & think.
Collapse