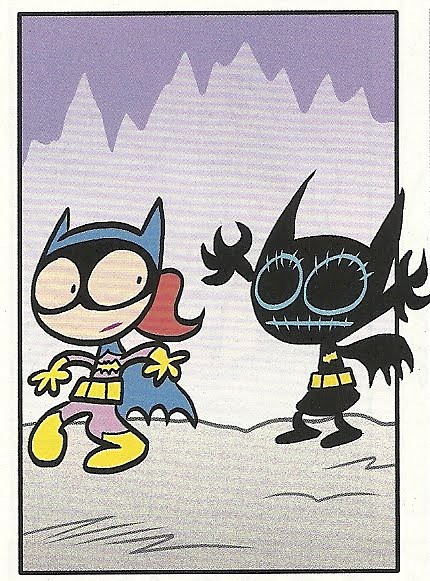 I have sure been remembering my dreams a lot lately. I woke up at three am & jotted down a few notes in my phone's "drafts," which is how this one stuck with me. A dream, rather than a portent-- no omens, no Arlequina, no auspices, no Girl from Room 43. In the dream, Ann Ward & Summer Glau played sisters, both of whom were bloggers-- I presume Summer Glau's character Orwell on The Cape has something to do with that, along with watching Serenity the other day. & I don't think I mentioned this, but I did tweet about it: I saw Ann Ward on the R train a few weeks ago, so she must have been percolating around in the back of my head as well. Anthony Stewart Head was an Iroh like figure-- the sort of lazy-seeming but wise zen master. He literally reclined on a pool chair most of the dream. Matthew Lillard was in there too, playing the cut athlete of the family. The family? Didn't I mention that this was a remake of Modern Family? It was Television Night last night, but Modern Family didn't record, so instead we all watched Celebrity Mole. Maybe it is weird that I own that on DVD? Anyhow, in the dream we were starring in a remake of Modern Family. I think I was the nerdy dad & Jenny was the mother, but she wasn't really in the dream. We took a family photo at one point, & we all drew together, portrait style, & I took a pair of iPod headphones & stuck the ends in my mouth, put each bud under my tongue. Maybe that is how headphones work in the future, I don't know. At some point, Matthew Lillard was being challenged to a lot of contests by this girl at the pool-- you know, she kept yelling insults & dares at him. I think it was Madeleine Dupont, who I think was on my mind because I was amazed that not only does Facebook have a "Favorite Athletes" category, but I have someone in that category-- Madeleine Dupont. At some point she came charging over to-- I thought-- physically assault Lillard, but instead they merged into a single blob of flesh. So, thanks for whatever, brain. 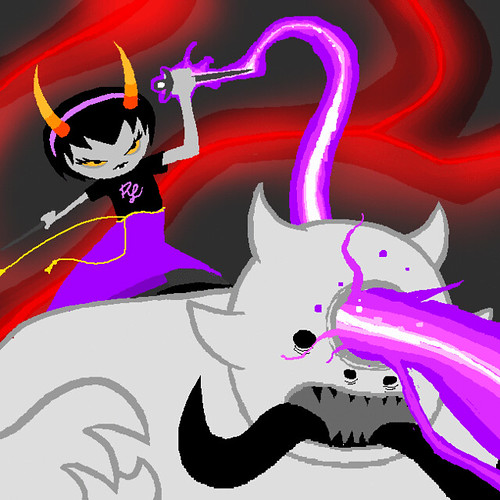 Zach Wahls's speech has been making the rounds, lately, but I can't concentrate on the content of his message. I've been reading about Boy Scouts & gender in secret societies lately, so my brain gets stuck when he talks about being an Eagle Scout. I'm guessing that a tolerant Troop is behind it, but I don't think I could handle being in a group that was so vocally opposed to ideals that I care about. I've just sort of been dwelling on that, thinking about how I want to have "Batman Scouts" where you learn rope climbing, boomerang throwing, & martial arts, all while progressing through the ranks of Robin & Nightwing & eventually Batman. I watched an episode of Penn & Teller's Bullshit that was about the Boy Scouts debacle, even. I kind of hate Penn Jillette, & this episode is typical of why-- condemning bigotry while making gay jokes & using women as props? Still, he makes some fairly good points. He's basically a perfect distillation of the atheist libertarian-- you can agree with him a lot of the time, but the rest of the time, what the heck, what the heck. So that has been sort of gnawing away at the back of my brain. I had lunch with Will today, since he'll be back to the Brooklyn saltmines soon enough. We went to Rye House, since I was so impressed last time. This trip I had the truffled grilled cheese, which was darn tasty but not so much I feel I have to order it every time, & the baked potato soup, which was a fine taste experience. Then it was my turn to go back to the grindstone...but not before getting a few sibling interoffice envelopes to the riddle! 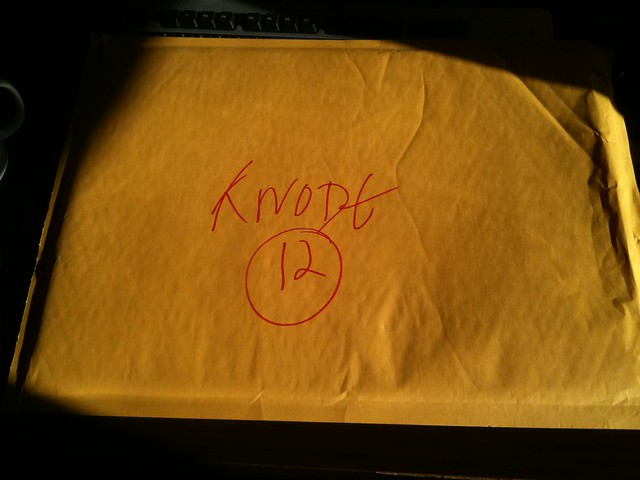 Day Three of the Riddle. I wondered if I would get anything-- most of the day passed with no sign of mysterious interoffice envelopes. Then, two at once! Look at that penmanship; it totally looks like someone is trying to obscure their handwriting. Maybe writing with their left hand? 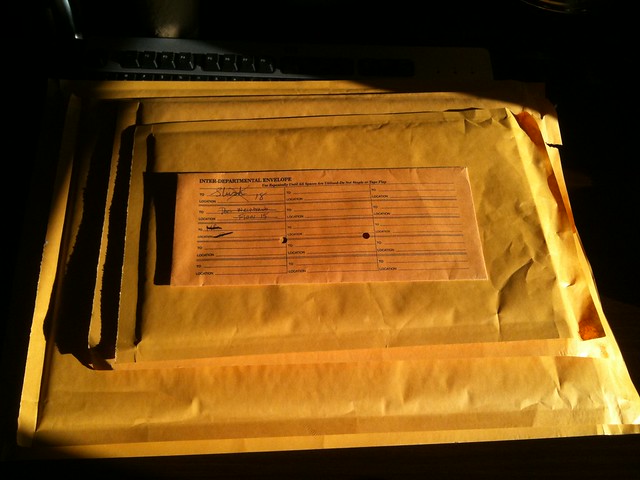 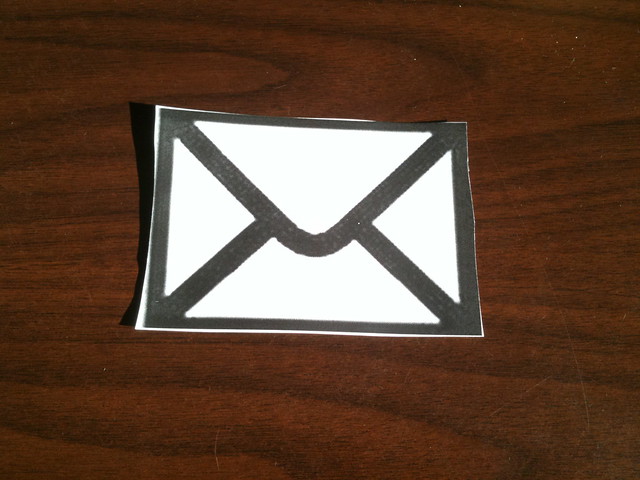 & then inside the last envelope was...a printed icon of another envelope. 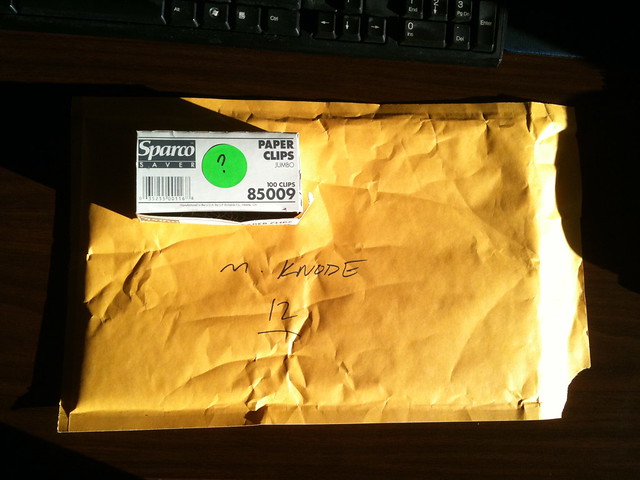 In the next envelope was a box of paperclips, marked with a question mark. The mail guy said that he'd heard from the other mail guy that the source of the envelope was the 18th floor. The only person I can think of on that floor is Kat, though I wouldn't entirely rule out her boss, even. I also wouldn't rule out Nick & slash or Heather, as they are on 19 & could pop down a floor to throw me off the track. 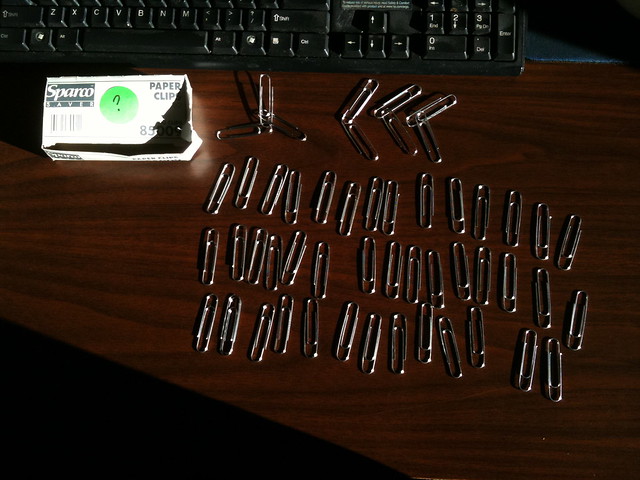 There were 52 paper clips in total-- one for every week, or perhaps the 52 worlds in the DC comics multiverse. Three of the paperclips formed a triad & there were three duo clips-- but that might have happened organically in shipping. 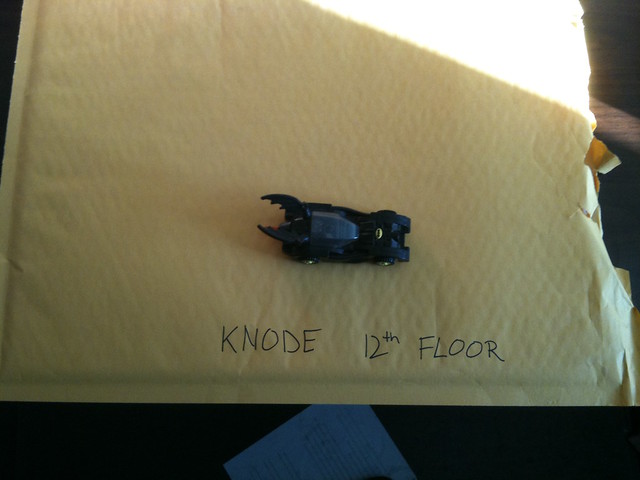 An hour passed & then another envelope appeared-- with a Batmobile in it! Again, different handwriting, but it looks awkward-- possibly the same culprit. The mail guy said that this package had come from 15, which as far as he was concerned meant that it was Andy. That is a strong possibility-- Monica would probably help with that, & lots of other Saints up there, like Sarah & Rachel & Amber & Loren. Plenty of suspects. I'm not entirely convinced that the 18th & 15th connections are solid, though.

(Photo credit to Matt on this series of evidence photos.)
Collapse