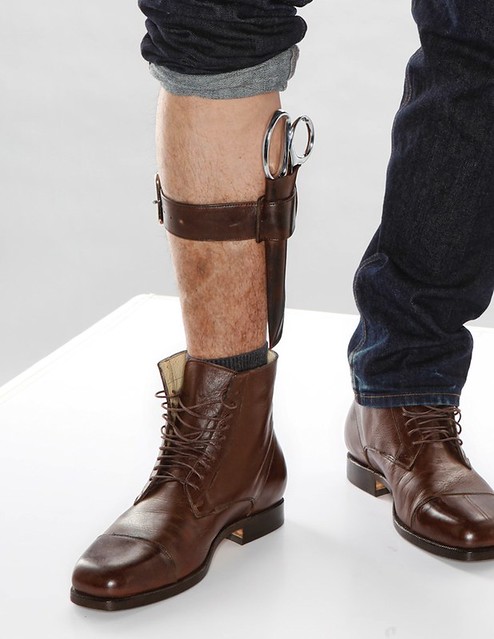 "Everyday Weapons: Scissor Holster" by Chromoly; one of my favorite things. 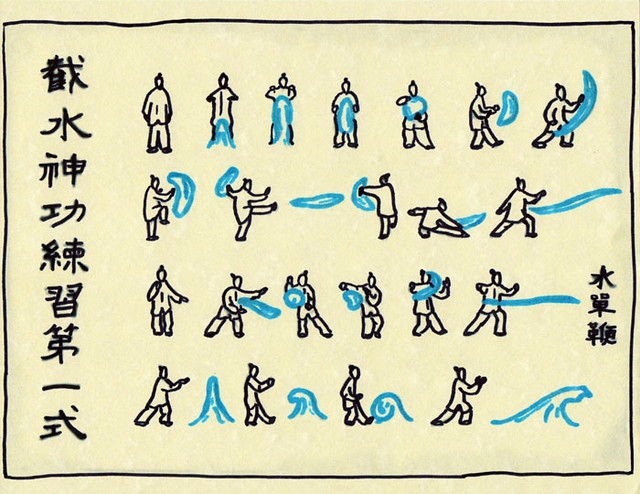 I think the ballad of yesterday really began with my shoes. I laced up my Chuck Taylors, stepped outside, walked a couple of meters &...blech. The weather was slushy & gross. "I should walk back & put my boots on," I thought, standing still. Eh, I was already running a couple of minutes behind. I trudged a few more meters & thought to myself, "I really ought to go put my boots on." Next thing you know I found myself at the street corner, & there was no turning back. I had big plans to go to the container store after work; as you might imagine, those were canceled. Jenny went over to Kira & Nino's apartment to see Olivia, but me & my cold feet decided to stay at home rather than trudge out over there. I know, I could have worn my boots then, but I felt somewhat defeated! I had gone out with Matt & Kat for lunch-- we got sushi-- & my shoes had gotten a little slushed then. Just bad decisions haunting me through the day. So yeah, I stayed home & watched television. I'd been catching the first half of Serenity at the gym, lately, but never the end. I got to the point where they were sneaking through Reaver space to Miranda...& then it was time for free weights, or whatever. Last night I finally sat down & watched the last half of it. It was starting to bug me, like seeing the first half of a pair of parentheses (& then...they never close. The worst! So I finished watching it, closed the brackets, the bookends, & I will tell you what-- it holds up. & while I was never very attracted to Morena Baccarin, now that I've seen her with short hair I really am. After that was over, I killed time watching some Avatar: the Last Airbender. I've been sort of glorying in the reflected glow of Sherene & Marie watching it for the first time, so it was on my mind. I watched "The Western Air Temple" just for the line "Hello, Zuko here!" & then followed it up with "The Firebending Masters" & then finishing with "The Ember Island Players" just to get a little metatextual. Jenny came home, but she messed around on the computer while I watched Tosh.0. At this point, Daniel Tosh is beside the point; I watch because it is America's Funniest Home Videos, & ignore the host. The Cold Steel Great Sword video was on the show, which cracked me up, since my circle of friends had already circulated it in a "woah, bad ass & hilarious" vein a long while ago. Because we are DnD nerds. Otherwise, well. I've made a few complaints, lately-- I ordered a used hardcover off Amazon & got a galley instead, & my local post office shovel their sidewalk like huge jerks & it creates a hazard, & I complained about SNL transphobia. Otherwise though, nothing much doing. 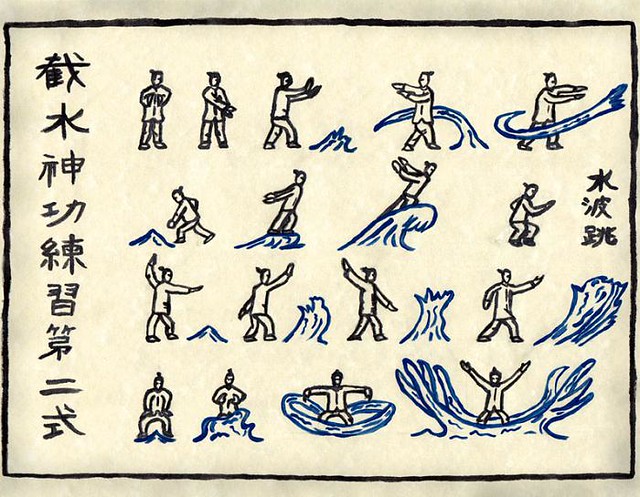 The Forbidden Zone!
What lies beyond the highway?
The Fruit of Knowledge!

The map of the woods-- or I should say The Woods-- that is a few pages in, that is what really makes this book. It is a memoir of childhood, a semi-fictionalized account of growing up. I generally don't like "coming of age" stories, but this is short & germane. Have you ever been a kid who was alternatingly belligerent & friendly? Who was gifted but didn't want to do the work? Yeah, I'll bet you have. Did you have huge fantasy romps in the fringe woods where you grew up? Well, I did. The woods-- excuse me, I meant The Woods-- are a big deal. I remember the tree house we built, complete with carpeting on the floor. The weird conflict of pornography-- the older boy's interest, the younger kid's disinterest-- yeah. That rings true. This account doesn't rely on cheap "feel bad" tricks, which sells it. Just a kid, doing kid things, playing soldier. The carefree nihilism of tweens. I remember that. Waiting out being in trouble to go back into the fantasy world of his own creation. I'm a little sad at the ending-- playing army is kid's stuff? I guess I skipped that part, because I'm still playing lets pretend. 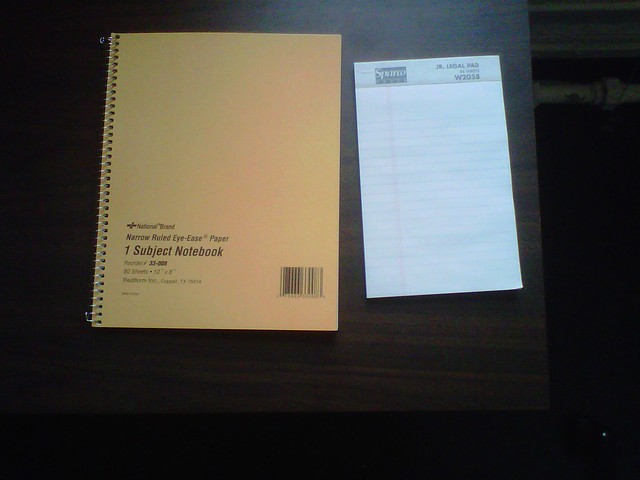 Yesterday I got a mysterious interoffice envelope with a 1 Subject Notebook & a Jr. Legal Pad. Weird, right? I thought so, & I joked about it, but then promptly forgot that it had happened. 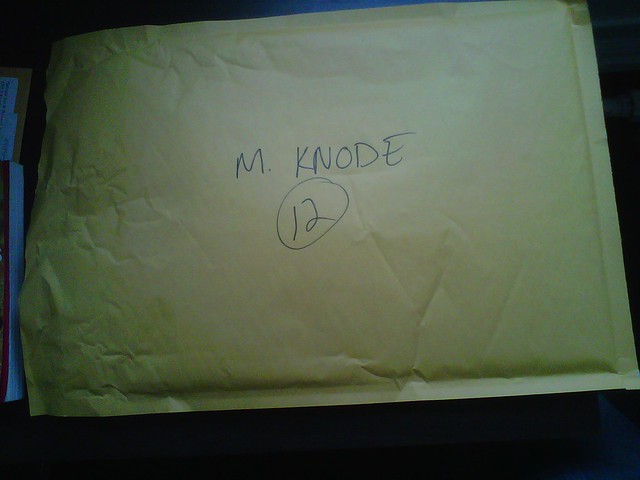 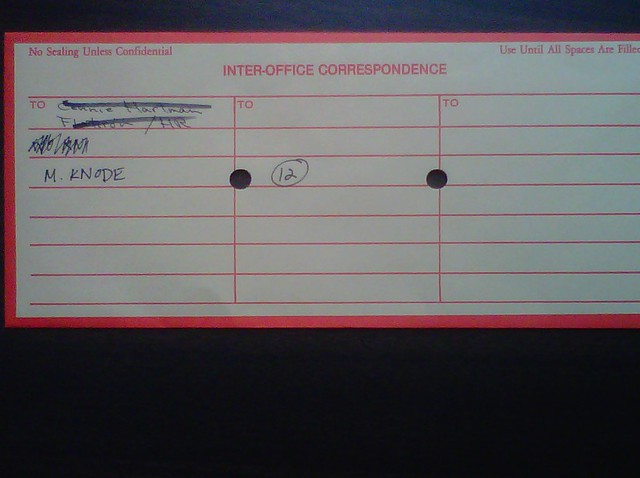 Then today I got two mysterious interoffice envelopes. I can't tell anything frmo the handwriting, but the smaller envelope was first sent to HR, then...well, it is scribbled out, but it almost looks like W KN. 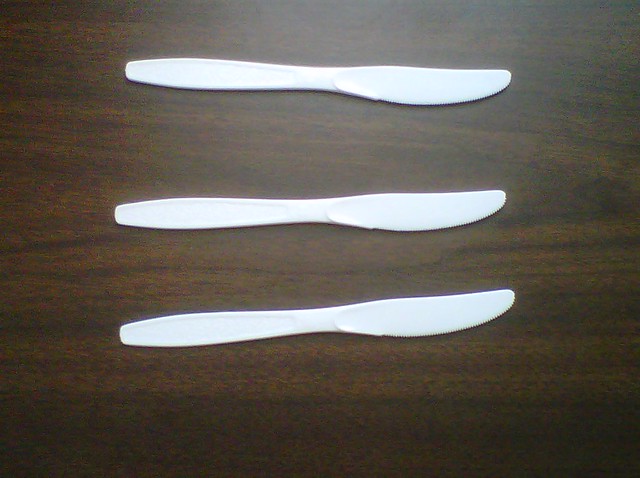 The big envelope had some plastic kitchen knives in it; three, to be exact... 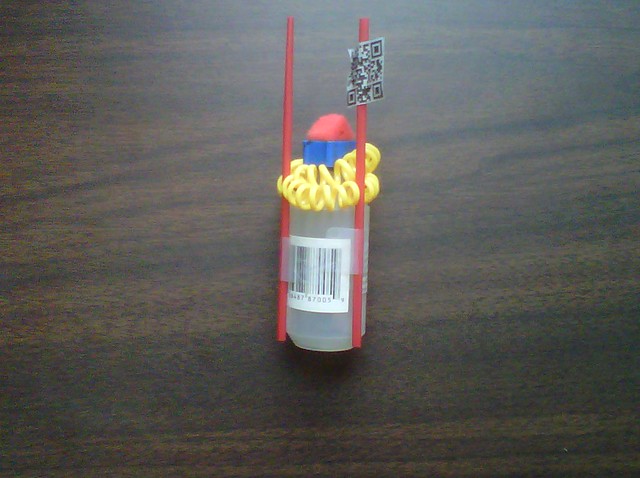 ...& a bottle with lots of things taped to it. It is a sort of "daubbing" bottle, & it has a package of iodized salt inside, along with a horoscope for Aries-- meaning they know my birthday-- that reads:

♈ Aries March 21 - April 19. Get out,
mingle and be friendly to folks from
all walks of life. There is a new ac-
quaintance waiting to meet you
who will have a strong, favorable ef-
fect on your social life. 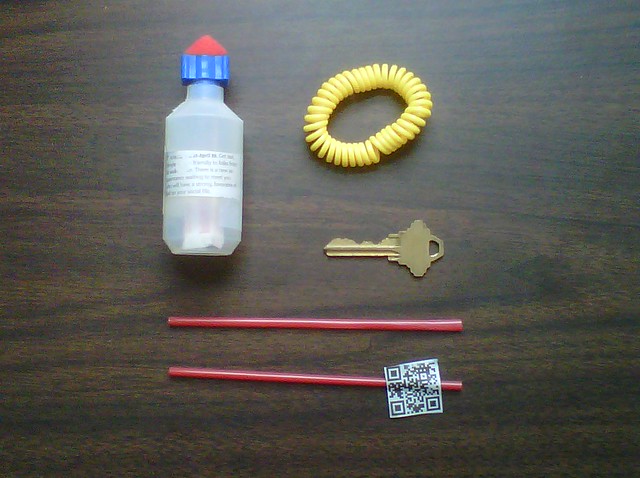 Taped to the bottle are two straws, a curly plastic band, & a key. 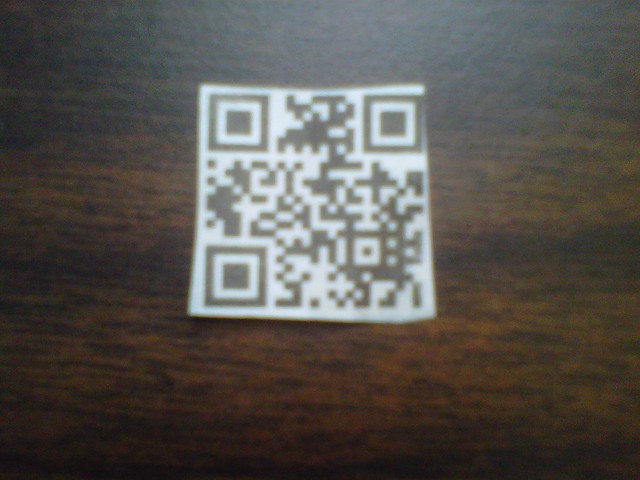 There is a QR code taped to one of the straws, but no one's smart phone can get a result from it. The back of the code is the letter "R". 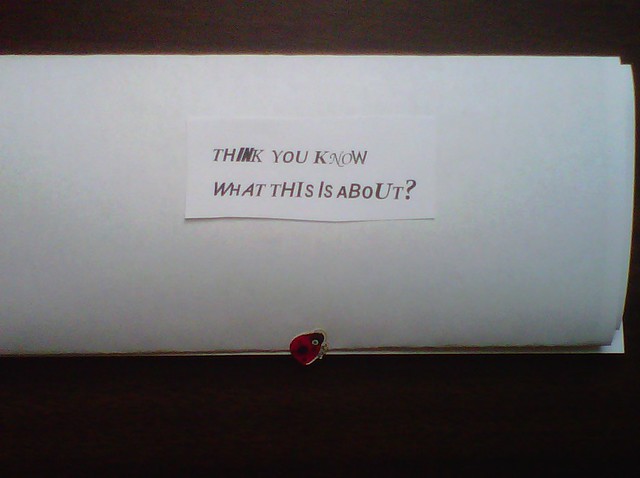 In the smaller envelope was a letter saying "THINK YOU KNOW WHAT THIS IS ABOUT?" in ransom letter font, with a ladybug sticker. 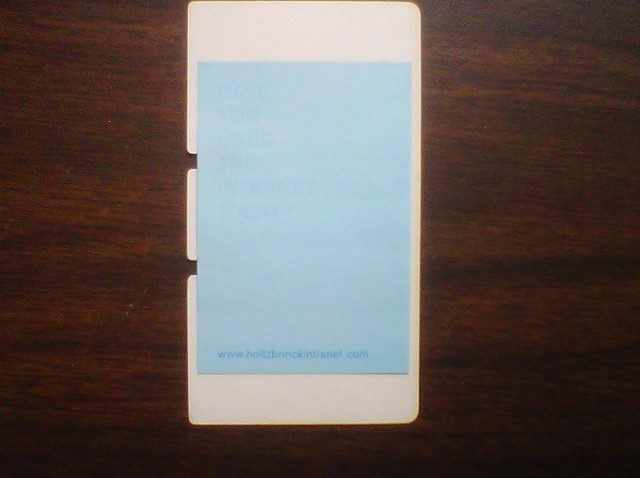 Inside there is a Rolodex card with a sticky-note attached that says (in the water mark): "HAVE YOU USED THE INTRANET TODAY?" & links to a defunct company site. 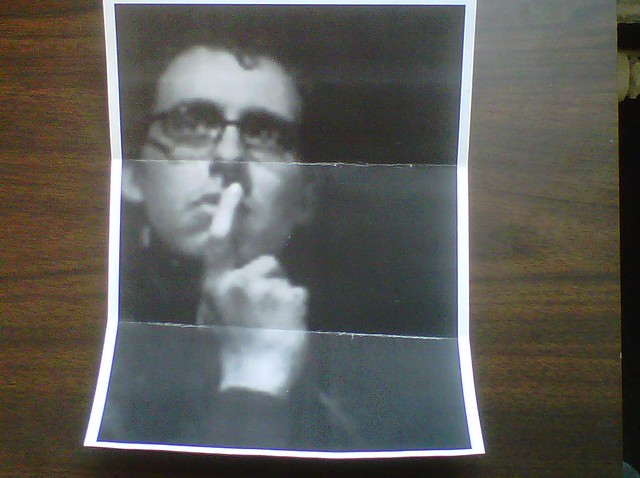 There is a picture of me as Wardlock from Witch Prison! 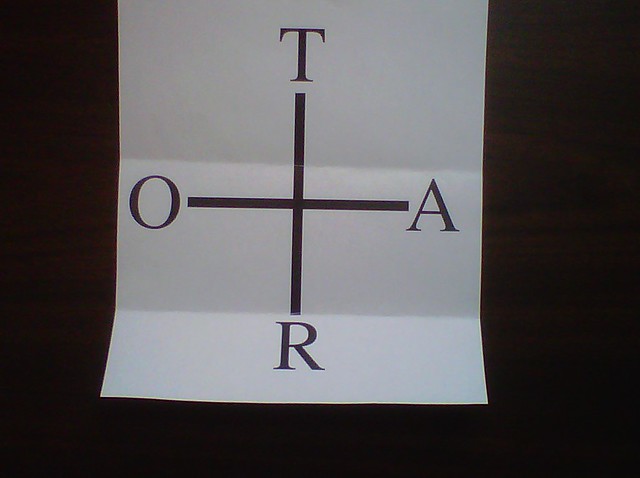 (Special thanks to Brian for taking these evidence photographs.)
Collapse