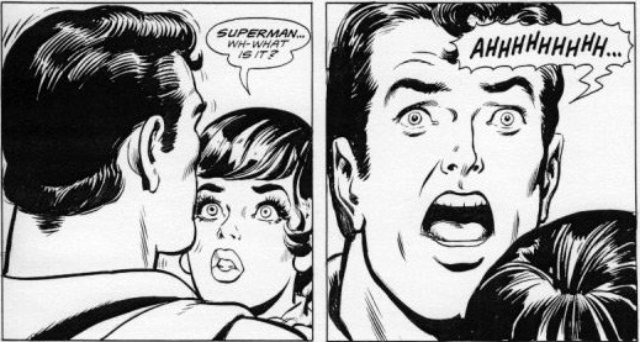 In last night's dream, I kept getting kicked off of trains-- usually under some obscure pretext like "the cook in the restaurant car said I have to bounce you" or what not. Really weird, just continually being hassled by train staff, forced off & waiting on the platform for the next one. Eventually I found out that it was some jerk cop hassling me, abusing his authority-- I had tried to compliment him earlier, saying that he should be his own supervisor, & somehow he took exception to that, & made it his life mission to harass me. He had even called my job & my wife to try to "bust" me, & get me in trouble. I took his badge number & said thanks for calling my place of work & my wife's place of work-- now we have evidence that you are unlawfully targeting me for no reason. That did the trick, & the trains started running again. There was a drunk girl on the train, a soused Italian, who kept leaning over her boyfriend & cuddling with me. Not romantically, but platonically. It was actually great; the cop was part of a stress dream but she was this avuncular presence, just this bubbly caretaker. Eventually I found out her boyfriend's name was Columbo & her name was Arlequina. Makes sense; harlequins are always an omen of safety in my dreams. Seriously, I can't over-state how nice that was. Cuddling wih Arlequina. Also, kudos to my brain for "Alequina & Columbo," which is some world class word play right up there with the telescope of the Amber Giant.

Yesterday evening was nice & relaxing. Jenny worked later than me, so I got to go home & relax for a bit, fool around online, before finally getting ready to go to the gym. I went about half an hour ahead of Jenny, & met her at the gym, which gave me a decent clip-- I put in an hour fifteen again. I'm glad that is becoming my "usual." Jenny have developed a knack for giving me a kiss right in front of girls at the gym who have a crush on me. You know, the ones who make eyes at me when I'm on a machine, or look at me in the reflection of the mirror. Gym crushes! No harm, no foul-- doing that sort of silent flirting is a good way to make the drudgery fun. I've been mixing up my routine with sets of lower weight & higher reps-- just as my cooldown period, as it were. After we left, we went home & had leftovers-- Jenny ate the ziti & I made a sandwich-- & then we split a beer & sat down to watch Human Target. It was the episode "Kill Bob" & it was kind of a perfect episode. I really liked it, it had me laughing in the aisles. Well, metaphorically. We don't have aisles at home. Lauren German played an assassin/school teacher, & her portrayal of saccharine Stepford Wife & cut-throat spy was really wonderful. I was super impressed with her range. All of the usual cast were on point-- Valley was at his best as Chance, McBride's Winston was super curmudgeonly, Montgomery's B-plot was well handled, Varma's sort of fragility worked well, & Jackie Earle Haley is always a show-stealer. I was very pleased with that hour of television.

Lankhmar Book Three: Swords in the Mist by by Fritz Leiber.

Heavens above (or Hells below, or Places outside) but these things are fun. I'm not convinced that book lives up to the hype that Leiber rivals Tolkien or Howard, but he sure can write a ripping yarn. This Lankhmar book finally does catch me up with the Mignola comic, so it is all virgin territory from here out. Did I call this a Lankhmar book? That is only partly true-- a solid half of the book takes place in our world, this very Earth. The change in setting is in fact brilliant-- Leiber includes tossed off mentions of dusty Jewish scrolls with "mixed-up, messy monsters-- things with ten heads & jeweled cartwheels for feet, things like that," & it really goes a long way toward making his made up profundities sound...well, profound. When he tosses off lines about "half-illiterate" Greek stories that talk about ears of corn & six pomegranate seeds, it makes the tossed off lines in the rest of the book seem like they are the hint of a tale that, in fulled context, would fascinate us. Fafhrd & Gray Mouser, on the other hand, could care less. They are truly adventurers, now-- the mysterious wizard gives them vague clues & riddles & they just respond with taunts while contemplating violence. Yes, I know that well! Heck, in the zombie game, I was that. Crazy guy offering you unlimited power? Yeah, better hack him to pieces. & so on, & so forth. "When the Sea King's Away" is their tale of a romp below the waves, & I am hard pressed to think of a better underwater scenario. The book is still unabashedly misogynistic-- a problem in fantasy literature that I'm all too aware of-- but they are just such a rollicking good time. If you can roll your eyes at the way women are handled-- & it seems to be getting better, as the years wear on the author & the context he's writing in-- then these sure are rewarding. Or well, who can say; the stories are written at such disparate times. I went ahead & ordered the next two, already-- so I guess you can say I'm hooked.
Collapse