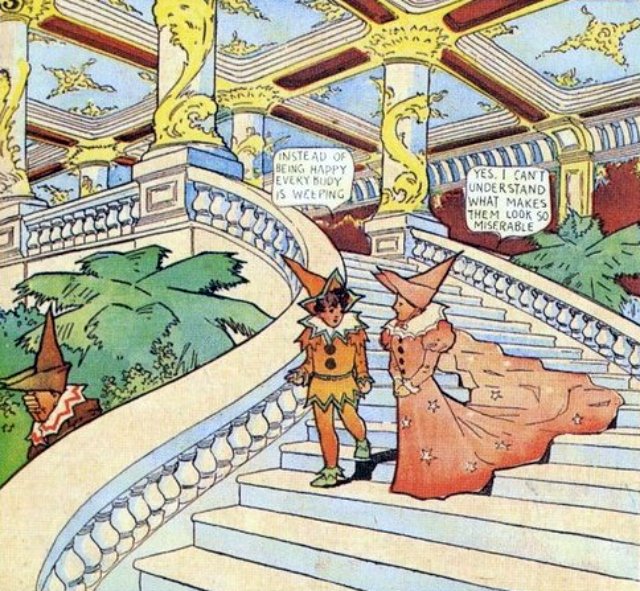 In my dream, we were a team of planetary explorers. We'd successfully set down & built outposts on hostile worlds before, & this one was no different. We stayed in the landing module as it burned up in the atmosphere, but then it deployed its parachute, & we all jumped out to skydive along side it. The surface of the planet was all terraces, all layers & levels. Rolling mesas, staggered chasms. We all aimed for the ledge where the lander was headed, but

fatbutts missed it-- she went sliding down into a crevasse, & we knew we'd have to find her later. The planet was occupied by giants-- there were members of the species diaspora in the Galactic Senate or whatever. I had diplomatic instruction: I was supposed to befriend or conquer each of the tribes of giants & get an item of significance from each group. The levels of the planet each belonged to a different breed of giant-- the highest peaks were the ice giants, then the mountain giants, then the hill giants, so forth & so on, down to the fire giants in the planet's core. There were many species, & from each I was going to get a totem-- an ice spear, a rock club, so on. I went in & befriended the ice giants, & learned that Lilly was hiding among some jungle giants many layers lower. There were adventures among the giants-- hiding in caverns, climbing down pits, fighting with huge bullies. Somehow then I was back at the Galactic Senate, where I overheard the amber giant ambassador-- beautiful, enormous & the leader of the diaspora delegation-- talking about how the fire giant's hammer would melt the ice giants spears, how the dark giant's nets would swallow the sun giant's javelins-- it was impossible to get all their totemic objects! We'd been sent on a suicide mission. Then-- the forbidden dance! Seriously, then there was a dance scene, where I did a sexy tango with the very attractive & very big amber giantess. Like, an over the top parody, complete with making out. & then! At the pinnacle of the dance? I stole her telescope, which she'd held behind her back. The Amber Spyglass, I guess! That was her tribe's item of power, & so I obtained it.
Collapse