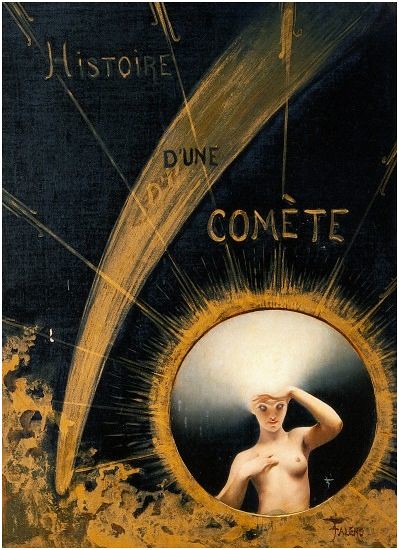 ("Story of a Comet," oil painting by Luis Riccardo Faléro.)

I'm a little spaced out today. Or, I guess I should say, this week. Just haven't gotten my head around the process of being a living creature. I had a successful game on Sunday, but I didn't talk about my Saturday, so lets start there, maybe I can get a toe hold in this glacial week. Well I did talk about my Saturday morning, when I got up & watched Easy A with Jenny-- so lets start there. I don't remember what we ate for breakfast, but lunch was a huge farro salad with celery root & prosciutto & cucumber. Jenny forgot to ask me to pick up greens, so I had to make a couple of trips out into the cold. Just because I like Always Winter Never Christmas doesn't mean I like changing out of my pajamas & going outside over & over! At one point, Jenny opened up an Important Looking Envelope & then said "Oh no!" I was concerned, of course-- was there a problem with our health insurance? Maybe our checking account had been hacked! No, no. Something much worse. They've upgraded us to a better credit card, & discontinued our "Diamond Preferred" card! Cosmetically, the Diamond Preferred card is awesome. Jet black with a holographic diamond-- when you whip it out, people act like you've pulled out one of those titanium American Express cards, or whatever. Alas, it is no more-- now we'll just have an ugly blue one with like, a better interest rate. Eventually we went to the gym, the two of us-- I ran into Martin there, & was joking around with him. "How long are you going to stay?" "Oh, hour fifteen, or longer if I decide to." "You should just go home at an hour fifteen." Well, it turns out, that benefited my contrarian nature! & I did end up staying for an hour & a half. Lots of machines, decent chunk of cardio, decent bit of free weights. Good for me, if I do say so myself.

That lazy landslide had brought the day to darkness-- the night! Willie's Dawgs was closing its doors, so we had our last supper with them, our swan song. I grabbed one with chili, one with chili & cheddar, one with sauerkraut, one with caramelized onions, & one with pickles & swiss, & then Jenny & I cut them in half & shared. I had picked up a bottle of wine from Picada y Vino, & we drank that along with our franks. I confess that I chickened out about the wine-- I had meant to ask the sommelier for a recommendation to go along with the hot dogs, but then I decided to fake it. I just don't like not knowing anything about. I don't mind asking questions about beer, but then I've got a rudimentary palate for beer-- while I'm not an expert, I am not ignorant. That counts for a lot. Wine though...I still don't have strong opinions or feelings about wine. My tongue just doesn't care. Sure, I can tell if something is very oaky or has a lot of tannins, but I don't really have opinions about it. Not that I don't like wine, I just don't have the sophistication of enjoyment required to have an opinion with any weight.

Anyhow, while we ate & drank, we started watching Fringe. I had been hearing for a while that after a mediocre-decent start it really became a strong program, & I can see that. It is very much the inheritor of The X-Files, without the skeptic. I've often mused to myself about how I would have handled The X-Files-- season one with fanatic Mulder & skeptic Scully, season two with both Mulder & Scully as professionals & believers, season three where Mulder starts acting really sketchy & going off the deep end while Scully stays on the mission, season four where Mulder joins the conspiracy & Scully is at odds with him, season five where Mulder has rescued his sister from the conspiracy & Scully starts convincing the FBI of the X-Files importance, season six where they get a huge lab & general funding, & then season seven is the year they make first contact. Anyhow-- Fringe is the show where the weird isn't denied. We watched the first two episodes, & I know that it is mostly an alternate reality show, but I have a theory. Or, if not a theory, than a pitch for what another X-Files or Fringe type show would be-- the humans living on the edge of the Singularity. The Homo sapiens alive right at the very edge, where every episode is an outbreak of autonomous nanites or sentient computers or people doing genetic engineering in their basements or whatever. So-- I'm excited to start watching Fringe is my point, I guess. 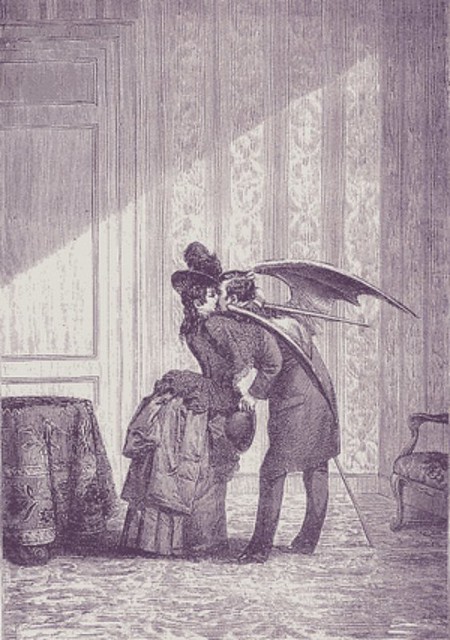 Lets skip ahead to last night. I had planned on going to the gym again, but by the time Jenny got home I was just ravenous. I mean, starving like crazy. Beats me as to why! One of my bosses gave me a gift card to Argo Tea, & I used it to buy two of their little mini-sandwiches for breakfast, along with a pomegranate tea, which was too sweet to be any good. The panninis were actually decent though. The for lunch I had a decently sized salad-- so I didn't have any excuse for my craving of massive amounts of food. Still, I gave into it! Jenny & I ordered from Rachel's-- I got the burger burrito, since I haven't had one of those in a long time, & my body was screaming for the flesh of a formerly living creature. I devoured that, finished the left-overs of Jenny's rice & beans & ate one of her ribs, to boot. Full, we put on the episode of Cougar Town that had been bumped by the Tucson memorial service, We chased that down with two episodes of Human Target-- they are still doing that two episode thing, & these two had been bumped from the memorial, as well. I sure do like that show-- Mark Valley has good camaraderie with both Chi McBride & Jackie Earle Haley-- though I think Jackie Earle Haley steals the show. Ilsa Pucci is at long last not the "annoying voice" of the team, & that bodes well for future episodes.

We watched both shows on Hulu. Every time I watch Hulu, I wonder if people realize what a successful site it is. Seriously-- if you make it easy for people to get their content legitimately, they will. You broadcast these shows, guys-- why make people who want to see it scramble through pirate channels? Just seems like a no-brainer. Plus, it means I actually watch commercials. When I watch television, as a rule, I use my DVR. I don't care when a show is on! I watch it when it suits my life. I don't change my life to suit the television's schedule. & I fast forward the commercials. Hulu? Has fewer commercials, so I don't bother. I wait through them. I might make fun of them, even, which means I watched them. Like-- there is a commercial for "Five Hour Energy" drinks, the little shot of taurine & the usual suspects. In it, they act like coffee is a huge hassle, & the guy knocks back his shot & then sits down to read the newspaper. It is profoundly stupid, in that people like coffee. It tastes good. Drinking hot coffee & reading the paper is a nice thing to do. I'm not saying everyone likes coffee, or there aren't other reasons you might want an energy drink, but in general, coffee is good. Terrible commercial, but here I am talking about it. All because of Hulu. I just think it is a good model, & one that should be expanded. See also, Netflix-- how many shows & movies have I watched on Netflix Instant that I wouldn't have ever watched otherwise? A lot. The answer is a lot.
Collapse