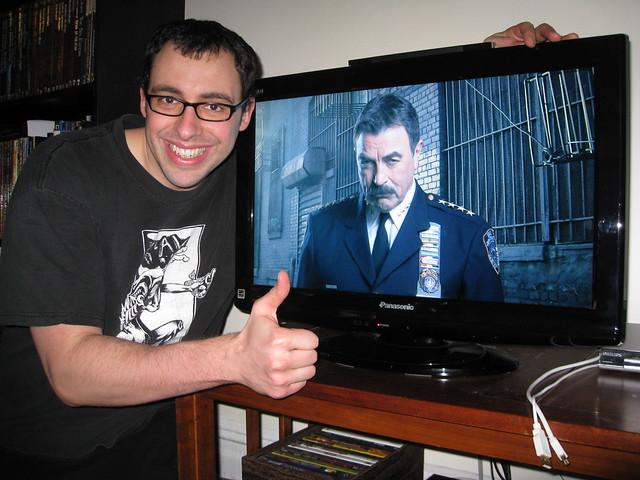 While I was sick I tried watching a few movies-- like Hellraiser & Jackass 2.5-- but couldn't bring myself to do it. Eventually I realized I was stir crazy enough to be getting better. The cabin fever lets you know its working! Television Night was an abandoned, haunted house:

fordmadoxfraud couldn't make it 'cause he was too busy, so it was just me & Jenny &

elladorian. We started off with How I Met Your Mother, which was fine, but not really anything special. That seems to be the shape of the show these days-- past its prime. We didn't have anything else, so somehow we watched...Aeon Flux? Not the movie, but the original cartoon. Maggie is of course too young to know about Aeon Flux, or have any attachment to it so she was...confused. Yep, that is Aeon Flux! Eventually we'd watched enough of that for Modern Family to come on. The Cameron & Mitchell story arc was all about stress, so we all cringed, but that show is funny, so it was a nice time. Also, I paused the television right in the middle of Magnum P.I. as the gruffest guy ever. It was perfect, & everyone agreed, so I took a picture for evidence. Then everyone say goodbye to Maggie! Today I went back to work, & all I've done tonight is go to the gym & pick up food. The Park Slope Ale House was super busy, but even worse, they'd run out of the Russian Imperial Stout before I even got a chance to taste it. A crime. Instead I drank a glass of Sixpoint Righteous Rye, & waited for my pork chop with snow peas & spinach while texting furiously. Got home & watched Community, which is another show at the top of its game. Now we're just killing time for the rest of the Thursday night line-up.
Collapse