This comic book was a gift from

onatopofthings-- along with Odd & the Frost Giants, come to mention it-- & it is wonderful, as you might expect. I'm feeling a little under the weather today, while the literal weather outside is all slush & rime, & I am hard pressed to think of a better way to spend the morning than curled up with The Hobbit-- & the graphic novel form of that delightful novel will do, in a pinch. Comic book adaptations are a tricky lot-- too light a hand on the adaptation makes it unreadable, while too heavy a hand leaves you feeling like the source material has been betrayed. Chuck Dixon-- yes, "Charles Dixon" is the now much more famous Chuck Dixon-- has it easy. The Hobbit is a simple & charming book, ripe-- it is low hanging fruit, when it comes to adaptations. That sounds rather more back-handed a compliment than I mean it to be-- lets just say that the nature of J.R.R. Tolkien's original writing is like one half of the jigsaw puzzle. The hard part. Which means that Dixon's job is all the easier, & that by putting his nose to the grindstone, he's able to make it sing. The rather more fanciful & faerie tale-like Hobbit has charms that form something of a inverted bell-curve-- when I was younger I adored them, but came to disdain them when I was a younger & more brash creature, obsessed with the trickier works of Professor Tolkien. Now, while my ultimate admiration of The Silmarillion hasn't faded-- rather, deepened-- I find myself appreciating Bilbo's tale more & more. It is the nooks & crannies of Professor Tolkien's world that draw my eye, now. Beorn the skinchanger, what is your story, fellow? Ghân-buri-Ghân & the Drúedain, what is that all about? Those kinds of things. & of course, goblins! I prefer "goblin" to "orc"-- I confess, I've bought in to Dungeons & Dragons division between orcs & goblins. Anyhow, artist David Wenzel-- who does a great job-- excels when it comes to goblins, & to wolves & to flocks of bats hovering overhead. Rise up, green horde!

The Accent Meme, which I saw

comeuppances do. I haven't listened to their yet, since I didn't want to taint my own results. I think that my teeth look crazy snaggled here, for one thing. Are they really that crooked! I don't think so. Also, I over-emphasized "theater" because I think I normally only say theater when I am being half-joking, or talking about where to go see a movie. & for the record, I regret that I didn't say "champagne" for the "carbonated beverage." I also am sad that I didn't add a question to this about what one calls the strip of grass between the sidewalk & the street as the variety of answers for that-- & Akron's weird predilection for horrifying names-- always captures my interest. If you want to play too, here are the rules: 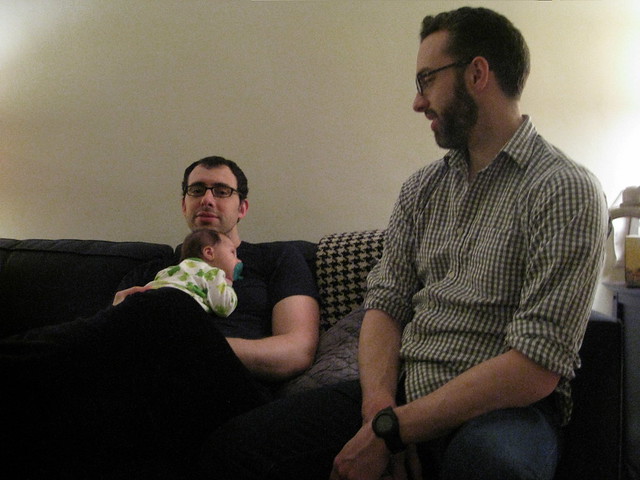 There was also a nice patch of hanging out with Kira & Nino & Olivia this weekend. Cast your thoughts back! Remember yesteryear, far off Saturday! I had one plan for the day, one plan for the night-- to go to the gym & then meet up with them. Ah, but a complication!

fordmadoxfraud wanted to come over. What a fine sort of wrench in the gears. They came & brought me a bagel, I made espresso to replace the bagel shop shorting them on coffee, & then we got to work making avatar characters for The Zombie Game. David & I were going to play, but Maggie decided to make one for fun, anyhow. We had thought we might watch Young Justice, but we never got around to it. Eventually David & Maggie went off to the Metropolitan Museum of Art & I finally gathered up my chain mail & pack, my thirty feet of silk rope, my 10 foot pole, & I trundled off to the gym. I did a nice hour & a half, but I confess that the extra fifteen minutes were all cardiovascular. & I don't want to confess as to why. But. I will. I was caught watching the worst movie ever. The Break Up. It wasn't good. But I was watching it. That is a shame I must live with. Otherwise it was a pretty good work-out; I've started fooling around with the weight I'm bench pressing, since my goal isn't to get "jacked" but rather you know, warrior-strong. 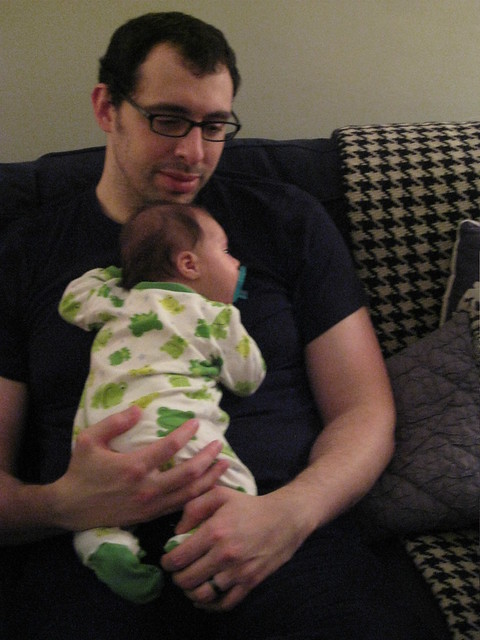 On the way home, I saw a text message from Jenny telling me to be at Kira & Nino's a half hour before I had expected to be there! Rush! & I was late anyhow. Aviva & David & their baby Sadie were in town, & so we were all having an old fashioned hootenanny. Or well, okay, that might be the wrong word for it. Still, we all met up & ate sushi! From Geido, & the Spanish mackerel was again my favorite. & I got to hold forth on my opinion that regular mackerel just smells like Sea World, which is something true that I occasionally mention. I think we were all still hungry when we were done-- not from lack of food but I think rather an abundance of appetite. Kira & I went out to pick up dessert, since that is our team, Dessert Team. We picked up chocolate & coffee, which was a good mix, & found out that Blue Marble has an ice cream shop in Rawanda that only serves one flavor of soft serve. Still, pretty neat. A guy was staring inside all creepy, & so I asked the girl at the counter what was up, & she said he was just the guy who gets the leftover bagels. Fair enough. Back at the ranch, Sadie was asleep-- I think it was a big day for her, so she slept most of the time. Then, home! 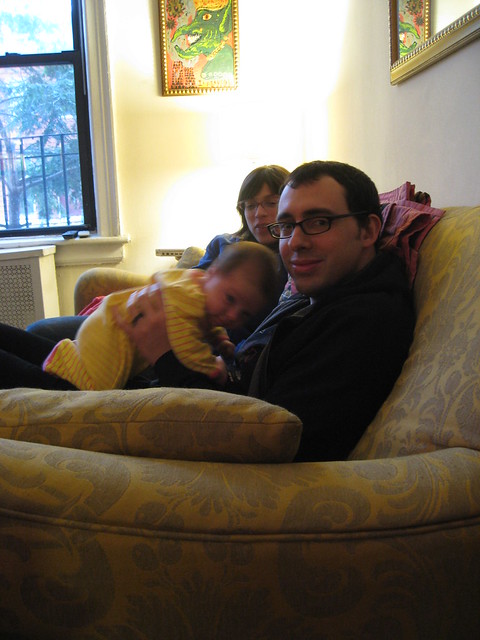 Skip ahead to Monday. Martin Luther King Junior's day, & thanks for the holiday. I picked up bagels for breakfast & brought them home-- Jenny & I ate them while watching a bit of Saturday Night Live. People love Pee-Wee Herman, which is fine with me. I don't mind him. Then it was a lazy morning around the apartment, just sort of doing out own things. I read a zillion comics. Seriously, I read, in no particular order:

& of all of them I think that the back-up called "Four Shadowing" in Big Time: Spider-Girl #1 was the best bit. A short bit by Paul Tobin, Dean Haspiel, Edgar Delgado & Joe Caramagna where the the young daughter of a reporter-- who goes on to become Spider-Girl-- is menaced & charmed by the Fantastic Four. The moral being: the Fantastic Four are awesome & you want them to be your best friends. In about time, we left to go meet Kira & Nino & Olivia for lunch. We went to Juventino, which we hadn't been to since they changed their name. They used to be Get Fresh, & they had those really good pig's head tamales that time. They've become more of a "fixed menu" place with a slightly more rustic Mexican tinge. I had cow's tongue in green sauce with eggs & potatoes & was so starved that I ordered a macaroni & cheese, too, not to mention split a bread plate. We all gulped out food down & then came over to our apartment. Well, first Kira & Nino went to the chiropractor, but then they came over with Oliva & we played for a while.

After Kira & Nino & Olivia split, Jenny & I went to the gym. Another hour & a half for me, with ten of the extra fifteen being cardio, but at least this time I was watching Underworld. Which, while it may not be the best movie, has sweet vampires having ninja fights. I mixed up more machines in, since last time I'd gone with lots of free weights. I don't know, muscle confusion? I came home & brought hot wings with me-- Jenny & I put on Saturday Night Live again & ate them before having our brainstorm! She deserves all the credit really. We had a few drinks & settled in to watch Inception. I liked it, but I wasn't confused by it. I didn't think it was that complicated. Which I don't say to be a jerk. I don't know, I wonder if its reputation comes from the same sort of response that The Matrix & The Truman Show & their ilk got. The befuddlement of people who never took a high school class on philosophy. Doubt your reality, everybody! Still, I think there is plenty of the opposite, of people who snubbed the film so they could seem more clever than they really are. I liked it. I thought it was well drafted & resisted the urge to go all "gotcha!" Everyone in it was great-- I think I get the "Joseph Gordon-Levitt Thing" a bit better now. My opinion on the spinning top? Would it topple or keep going? Well, I'll tell you what; having a labyrinth maker named "Ariadne" is a little too spot on the nose, if you ask me.
Collapse