"How much did this cost?"
"Thirty seven million bucks."
"What, you don't trust me?"

-Feynman, on CERN's testing of his theory of charge renormalization.

If this is the kind of wonderful science-oriented comic book we can expect in a post-Logicomix world, then I'm excited, because this was just fantastic. Now, I've been a fan of Feynman ever since freshman year of college, when Antonio lent me Surely You're Joking, Mister Feynman!, & this book really does right by him. By all of him, from his personal life-- marrying his childhood sweetheart after she was diagnosed with tuberculosis-- to his work in physics-- there is a nice fat section where he explains some quantum electrodynamics-- to some of Feynman's quirks-- like being a Brazilian parade musician or testifying in defense of the strip club he went to every day. It isn't hyperbole to say that Feynman is the Loki in the pantheon of scientists, up there with Einstein & Newton-- in fact he worked with Einstein as a peer & hell, QED is the most recent update of Newton's work with optics, really. Maybe my favorite bit of this graphic novel was the same part that really sticks with me from Surely You're Joking...-- his time at Los Alamos as part of the Manhattan Project. He's just such an imp, pointing out the security holes of the project & then getting scapegoated for them. Really, white hat hacking the invention of the nuclear bomb has got to be one of the all-time boldest things anyone has ever done. Feynman has such a massive mind, & developed such a gift for communicating the complex, & the way this book captures his struggle between those poles is phenomenal. By the end, during his involvement with the Challenger Disaster investigation, you can feel his frustration with the entire situation. Feynman is the sort of madman, the maniac who goes after what he wants with gusto while ignoring everything else-- but what he decides to go after will surprise you. He finds the middle path-- theory, between math & engineering, but theory that changes the world, that is more than equations-- theory that is understandable. 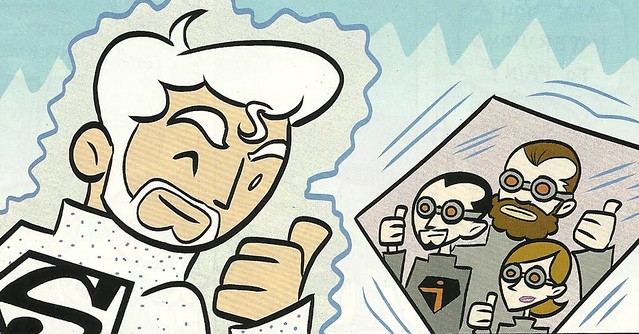 Mostly a shut-in since Wednesday, & to happy effect; it suits me. Thursday I came home to a slightly ill Jenny-- she was acting sick to try not to be sick, if you take my meaning. Resting up to give her immune system a chance to fight off whatever might be coming down on her. Me, I went to the gym, & entertained myself there. I mixed up my schedule, which made me feel both really strong & really weak in an alternating sequence-- I'd normally do this exercise after lots of other stuff, so doing it first makes me able to do more weight & more sets, but I normally do that exercise at the outset so pushing it to the back of the queue makes me feel like a wimp when I finally get to it. Star Trek IV: The Voyage Home was on television, so whenever I went on the elliptical, I just started cracking up, laughing like a maniac. Seriously, how do you expect me to keep this at 6 miles an hour if you bust my gut laughing at Kirk saying Spock took too much "LDS?" Such solid gold. Before coming home I loaded up on cans of soup & orange juice for Jenny, & when I showed them to her she made fun of me for buying Italian wedding soup, saying I liked it so much that I should start a tumblr called "fuckyeahweddingsoup." Really though, my dominant memory of wedding soup is putting it in a blender since the meatballs were too big for me to drink in my liquid diet after I had plastic surgery. After that we watched Modern Family, whose punchline had been ruined for me by a spoiler on a blog post somewhere, but I enjoyed it none the less. Cougar Town was pushed back a week, though, on account of the Tucson memorial services.

Friday night was similarly laid back. Jenny was feeling better, & she even stopped by the office to have a quick lunch with me at City Market, which is the deli I go to almost every day. At home, though, her stomach was feeling a little unsettled, so after teasing her for a while-- a good while!-- I went out to get seltzer to make potions that would sooth her indigestion. While she goofed around I watched the second episode of Young Justice, which is the second half of the last one. As before, I really liked it. I'm still unclear as to what final shape the team will take-- where is Speedy? He's not on the team? Who is Artemis? Will M'gann M'orzz be a bigger part of later episodes (I hope)? That being said, I'm totally into it. I hope there is some exposition about what the hell Aqualad's story is. You know, with Kid Flash & Robin, you can assume the viewer "gets it." You don't need to explain who Robin is, we know. Kid Flash? Super speed? Got it. Superboy? Clone of Superman? Ding, got it. Aqualad? Gills, I guess? Waterbending? Electricity?

After that, Jenny came back in & we watched Dinner For Schmucks, the movie with Paul Rudd (David!) & Steve Carrol. It is a remake of a French film, & it was okay, but not really any good. The best tool I have to describe it was that it was like a mean-spirited Wes Anderson film. "Barry" was occasionally charming with his eerily quaint hobby, but was also the kind of moron who ruins everything-- making him an unpalatable mix of cute & loathesome. Paul Rudd's "Tim" is the unlikable protagonist who should be having a crisis of morality, but never does...until the end, in an awkward & unbelievable dénouement. Jermaine Clement plays an eccentric artist who is really the glue of the movie-- I'm not the biggest Jermaine Clement fan (though Jocelyn says I look like him, to which I reply that not all white guys with glasses look alike) but he really nailed the proper tone of silliness for the film. Same thing with Zach Galifianakis-- I usually don't find him funny in the least, but his turn as the Art Bell-esque mesmerist was a good tentpole for the scenes he was in. Oh, & the Muellers were funny, in part because their interaction with Bruce Greenwood's character seemed like a spoof on the upper echelons of my company, actually. Oh, & Lucy Punch? For some reason, she seems like she should be on How I Met Your Mother. Same energy as that show.
Collapse