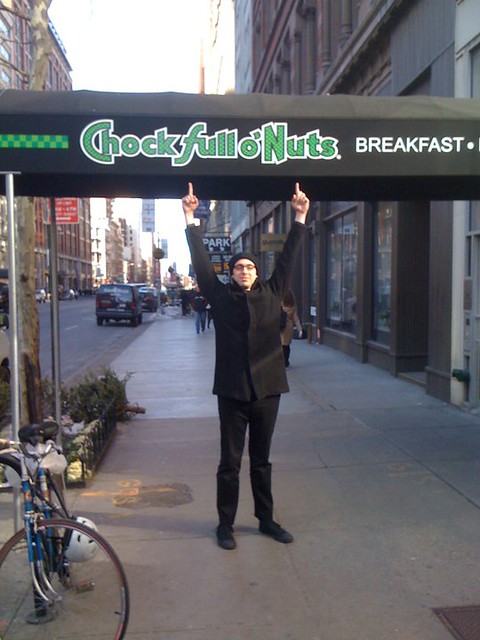 (Getting lunch on Monday, photo for T, by

I ate really terribly yesterday. Skipped breakfast, ate three slices of pizza-- barbecue chicken, multi-grain & sausage-- from Mozzarelli's for lunch, had spanikopita & miniature frozen tacos at Kat's & then Fatoosh for dinner, which isn't the worst, but the whole thing conspired to give me indigestion that kept me up till midnight. Thanks for nothing, gross burps. Still not a bad night. The plan had previously been for Jenny to have a city council meeting & thus work late, so I made loose social overtures towards some co-workers. In the end, it ended up as me, Matt & Kat all at Kat's place watching embarrassing videos of each other, including videos of me in Witch Prison!. I didn't stay late-- just till seven thirty-- on account of how the "blizzard" (which was really tame snowfall, but very nice powder) shut down Jenny's meeting & she was waiting at home. We had folded the laundry but not put it away, so she was lurking in the shambles, which isn't fair to her. Went home, put our stuff away, & watched the new episode of Tosh.0. Not promising for the new season, I don't think-- rape "jokes" aren't funny, & Antoine Dodson already "gets" it. After that Jenny went in the bedroom to read & I stayed up to watch the Batman: Under the Red Hood. It was better than I expected, but then, the comic was better than I expected, too-- from Judd Winnick or from a "Jason Todd is alive!" story. I still have problems with Jason Todd being alive (see also, Bucky being alive) but apart from that, the version of the story that brings Ra's al Ghul & his Lazarus Pits into the narrative is my preference (better than Superboy-Prime punches, anyway) so I was happy that the cartoon went with it. Neil Patrick Harris did a good Nightwing, Bruce Greenwood & Jensen Ackles were tolerable but not exceptional, I didn't really like John DiMaggio's Joker but I consider that a matter of taste & interpretation & I thought Jason Isaacs Ra's al Ghul was fantastic. Ra's al Ghul was maybe the best part-- well drawn, very sparingly used, & with Talia al Ghul in a catsuit with a Mauser. Tracey turned me on to Jason Isaacs by casting him in the background as her Oubliette character's father, but I also really appreciate the anecdote from Avatar: The Last Airbender-- the creator said "I imagine this bad guy as being like Jason Isaacs," & the casting director said "well, what if I can get you Jason Issacs?" A stern recommendation. The best praise I can give to this is the truth: I believed it as a Batman story.

& beneath the hood?
A corpse shroud of spider's web,
or bright hissing eels.

This concludes the bits & pieces of Fafhrd & Gray Mouser's stories that I had seen in graphic novel form. No, wait, there is one with mermaids & an octopus that I haven't read the source material for, yet. Still, I'm quite liking the Lankhmar books-- I've gone ahead & ordered the next one & will probably tear through that voraciously when it gets here. Fafhrd & Gray Mouser continue to be terrible people, but then, they aren't sold as being anything other than awful beings. It has a sort of unrelenting machismo-- I can understand being turned off by it-- but if you overlook it, there are rewards to reap. This book introduces Ningauble of the Seven Eyes & Sheelba of the Eyeless Face-- the patron wizards of the two cutthroats-- & gosh are they wonderful. Really, I'm into them. Is that common? I'm rooting for the wizards. My favorite story was the one about the birds, but I was tickled by the last volume, in which Fafhard & Mouser have to fight against...basically Wal-Mart? Pretty cute. I really don't know what to say. If you at all like pulp or fantasy, give these a spin. You'll almost certainly enjoy them.
Collapse