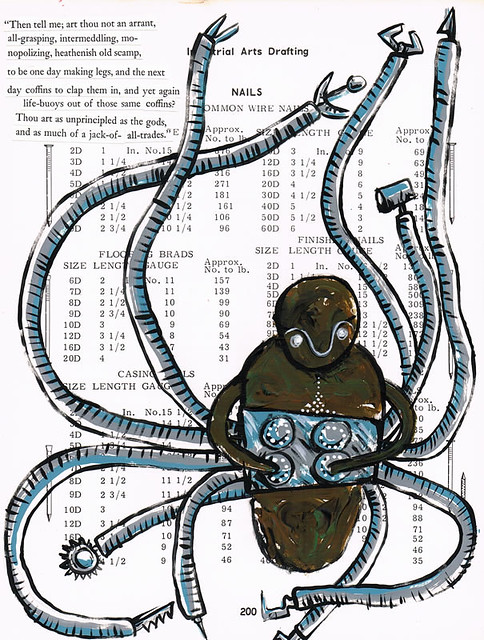 A little out of the snake-paths & dusty organ music. Yesterday being a decent balm to my mood. I woke up early, unsettled by restless dreams, & spent the morning fooling around. Restarted Epic Mickey to get the rest of the pins & the reels, & I've already managed to screw it up by not getting Small Pete's log book. Oh well, no big deal. In trying to plan lunch I ordered an omelette & then almost instantly was invited by

elladorian to come meet them at Palo Santo, to which I agreed. So, I picked up my food from the diner & sprinted a block & a half to catch a bus, & took that down to the restaurant. Worth it! David & I split some pork belly, we all shared a sliced n' diced avocado drizzled in oil & vinegar, & then I had the huevos bañados, since Jenny usually gets it & I'm usually jealous. All in all, a nice time, & I scammed David & Maggie into coming back to my apartment in the bargain. First we stopped by Staples so Maggie could get a notebook-- I tried to remember the type of ink for our printer, but I chickened out rather than buy it. Still-- I was right, HP 95 is what I needed. The sales person didn't really know anything about toner, which was a shame, because we could have figured it out, I bet. Back at the apartment, Maggie flipped through my Oubliette notebook while David looked through The Dungeon Alphabet.

After that we put on Young Justice, the new "teenage superheroes" cartoon. I'd missed the first airing of the show, somehow, & had hear mixed but generally positive reviews. It holds up-- actually, I maybe think it was awesome, or has the potential to grow to be awesome, anyway. I was confused if Robin was Dick or Tim-- it seems to be Dick, but a very computer savvy Dick. Actually, Robin's hacking & his evil laughter in the dark? Solid gold. Aqualad is the muscle, & it is the black Aqualad, son of Black Manta, that was recently introduced in the comics. Fine with me, add a little diversity to the team. Speedy is Roy, & a hilariously angsty Roy at that. Kid Flash is...Wally I guess? Again, I am not sure, since we only saw them in costume. Superboy was added to the mix at the end, a creation of Cadmus, part of project Kr. I hope he's got Lex in him-- I'm guessing they'll save that for a later arc. Speaking of, Cadmus is wonderful. Dubbilex is in it, & the Guardian, & g-gnomes ("genomes")! Later I guess Miss Martian shows up-- as the "niece" of Martian Manhunter, but like with Superboy's Luthor DNA, I hope her heritage as a White Martian is part of later plot lines. I'm a fan, I guess. Then Maggie & David switched off playing a little Epic Mickey, getting about as far as the end of Gremlin Town.

Jenny came home just in time to hang out a teeny bit with David & Maggie, but then they left to go study Greek. Jenny was a bit fussy...not in mood, but in wants. She was indecisive, that is the word for it. I went to the grocery store to get steak & brussels sprouts, which she cooked up but then didn't like, so out I went again to get deep fried macaroni & cheese from Chip Shop, since she wanted something savory & rich. We watched Human Target, which turned out to be a giant-sized two hours. As usual, I liked the show for being a good example of action & charming stupidity. It adheres more to the "Rule of Awesome" than to any physical laws. Water jugs filled with cooking gas explode? Sure, why not. Jackie Earle Haley is really the stand-out, for me, which I don't mean to speak ill of the other characters...Jackie Earle Haley just sort of nails the appropriate level of humor & menace. & just when you are worried they are threatening to pull a Women in Refrigerators, they toss you for a loop. Thanks for not being awful. Next week's episode is a two hour episode again, which...doesn't bode well for the show, I don't think. Are they just burning through their episodes to get their money's worth? I hope not; I enjoy the program.
Collapse