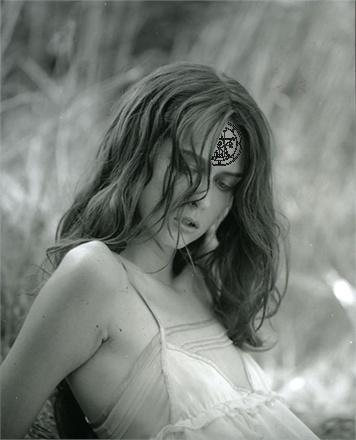 (Ann Ward for Vogue Italia's "Beauty in Vogue",
photo by Vincent Peters, MPSaint butchery by me.)

The week continues to be rather relentless, but what can you do? I caught lunch with

onatopofthings yesterday & today-- yesterday it was me & Ryan & Rachel, & we grabbed curry; then today it was Eisenberg's deli with just the two of us. I don't have a lot going on, otherwise, so I will maybe mention a few random bits. I was thinking about my favorite action figures, & I came up with:

I was surprised how easy it was to come up with that list, since I'm not really an action figure collector-- though I suppose DnD miniatures kind of count. Just a few thoughts, kicking around in the back of my head, some weird childhood nostalgia. Otherwise, my bad mood continues, & has maybe come to a head. Hopefully it will break, like a fever, & I can get back to my usual demeanor. The key is in using things constructively, which isn't my strong suit-- but I've been on an arc going upward with it for the last decade, so at least there is that. Otherwise, last night Jenny & I went to Marie's for dinner & to play with Eliot. I was, as stated, a ball of aggravation, but not too bad, I hope. We ate Thai food & drank a little wine & talked. Eliot is warming up to us, & by the end of the night I was burying him in a pillow fort. & of course getting buried in turn. Then home & an episode of Modern Family before bed. One last note? I just got new Frankenstein boots, huge juggernaut Doc Marten's, & breaking them in is rough on my feet. Poor little toeses!

The blade of the sword:
"Solve et Coagula."
Though mostly, solve.

I think the thing that draws me to alchemy is that it is an attempt to build a morality on the back of science. Now, I admire ethics & condemn morality as a rule, so I've chosen my words carefully. Alchemy contains in it the proto-science of chemistry, joined together with the the more esoteric arts of philosophy & sorcery. It is an attempt to see the revealed knowledge of the world, combined with the occult knowledge of the adept, & to try to reconcile the two into a spiritual path toward correct behavior. I'm not sure it succeeds, but I don't think that makes it worthless, but rather makes it a worthy object of study. Especially for those of us who spend our time on such things; heck, what is my Prisoner's Dilemma musing & the talk of a moral calculus but alchemy in the modern day?

This is an excellent introduction to alchemy-- not in that it is meant for beginners or that it contains explication of the subtle arts-- but rather because it is short, illustrative of alchemical symbolism, & has a strong & compelling narrative. That latter fact being a pleasant surprise! This is the third & most esoteric manifesto of The Rosicrucian Order, Christian Rosenkreutz being their eponymous & legendary founder. Like an alchemist's Pilgrim's Progress, it is rich with symbolism-- which Adam McLean is happy to dissect in the appendix. I can only urge everyone with a shred of interest to pick this up & read it-- we can have ourselves a lively discussion. We do know we are being guided through an alchemical riddle-- when Christian asks his guide the Virgin for her name, she replies with a riddle, whose answer is "ALCHIMIA," an answer first teased out by Leibniz (56, 125). I will say-- I was surprised not to find a rebis at the end of this book!

If I have one complaint with McLean, it is that he focuses only on the esoteric, & does not mention that physical procedures are part & parcel. While the physical transmutations rule the pop culture's understanding of alchemy, we shouldn't let that occlude the fact that it was not an entirely personal & spiritual affair by way of over compensation. Thus, while McLean wisely discusses the altar & the items upon it, he leaves out any more physical interpretations-- when in fact, many an alchemical treatise has its formulas hidden in allegory & metaphor (62, 130). He makes up for it with a good skill for summary & explication, bringing together disparate elements into a whole. The seven gifts given to Christian are a good example-- though again, the literal implications aren't gone into over much (21, 26-28, 132-133). He has wise things to say about the play within the play as an answer key, as it were, but sadly overlooks the best part-- that in between acts they bring on the Four Beasts of Daniel are a sideshow (68-71, 66, 138-139).

The Tower & processes wherein & by which the resurrection takes place reminds me of nothing so much as the images in the Voynich Manuscript (85). Here at last McLean mentions in passing albedo, nigredo, citrinitas & rubedo, the core stages of alchemy, in relation to a bird's transformations (87, 143). He's passed by the colours in the work at hand, as well as the changes in garments that the author brings attention to, which I think is a missed opportunity (65, 69-70, to note just a couple I found flipping quickly through). Still-- no appendix can be thorough in totality, & McLean's is very adroit. In particular he noted the stages of the knighthood, the books signed, the symbols taken-- the rose cross, the golden fleece, the golden stone. I'm particularly fond of that, since it played heavily in an earlier Oubliette campaign. I was also impressed by, & must agree with, McLean's opinions on the wings, ladders, & ropes of the guests at the tower (83, 141). Toward the end, McLean mentions a few works influenced by the Chemical Wedding, including Goethe's "Fairy Tale of the Green Snake & the Beautiful Lily" (150). Oh, how I hate Goethe. I hate him for ruining Faust with his moralizing, & when McLean notes that Goethe alters the themes & symbols of the Chemical Wedding to suit his ideology & politics, it just made me hate him all the more.
Collapse