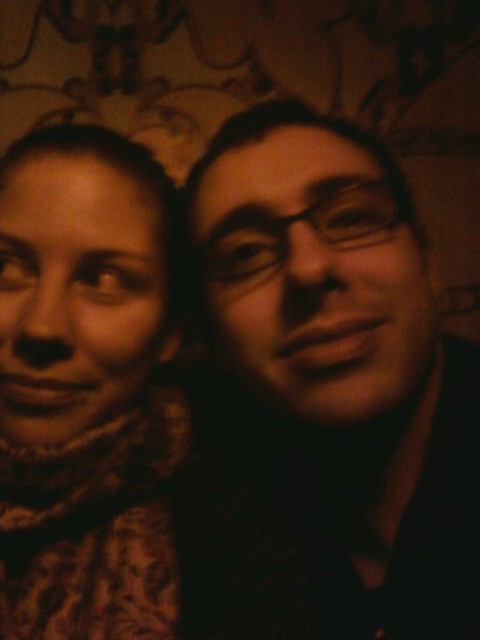 (Aubrey & me under publight & with a phone camera.)

A nice start to the week, at least. I've been good about gym attendence, which always makes me feel better about the state of things. Sunday I didn't want to go-- I was mired in lethargy, spending my time finishing reading Conan comics & watching Jenny beat Epic Mickey. Still, I managed to push through that laziness & go knock out some iron. Put in a decent hour fifteen, feeling none to shabby. Last night I went again, & I only did an hour, since the cardio machines were over-run by tourists; you know, the New Year Resolution types. It was another good pounding, though-- this whole every-other day thing has been a success, though I'm guessing at some point it will fall back into a three times a week pattern. Monday I met up with Aubrey, a workfriend who is making the transition to newfriend. We went to Bar Reis for a few beers & conversation. I haven't really been in there since

kingtycoon was in town, though I pop my head in now & again to say hi to Victoria. They had the usual on tap-- the Palm Amber that I remembered liking & the SixPoint Sweet Action which is an old standby. I found myself preferring the Sweet Action-- the floral & hops thing was working for me. We did the whole "so what is your story?" & I showed her my notebook & explained how Oubliette works. That kind of thing. Which is really just about all I've been up to! I was fussy last night for some undefined-- or ill defined, at least-- reason, but we watched Castle & I ended up snapping out of it. That is just about the size of things. I may have watched other things-- I try to be aware of my media consumption, but mostly I've been watching middle-brow television. I really like where bubblegum television shows are at right now; shows like Leverage, Castle, Burn Notice, Human Target-- these are entertaining, & know what they are, which liberates them to be good at what they are. You know what the word is? Pulp. & like the great literary pulp traditions, there is some great stuff in there. Oh & I had one of the Comments of the Day at Jezebel, wherein I basically just cut n' pasted the Fourteenth Amendment. In conclusion, I just ate some Shake Shake & am about to fall into a snake coma, like the type where a boa or anaconda snags a huge deer or a pig & then sleeps for a decade. Or make a dozen phone calls. Something like that.
Collapse