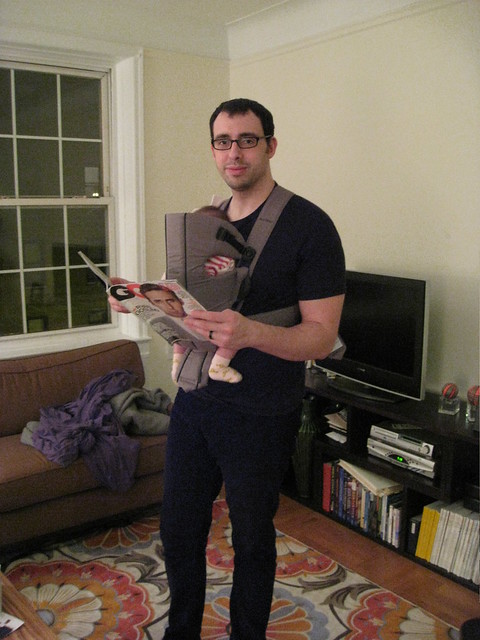 (Not the most flattering picture, but....well, me & sleeping Olivia.)

New Years Eve was spent with Kira & Nino & Olivia. First, before I walked over there, I beat Epic Mickey. In the end analysis, quite fun. The complaints about camera angles are understandable, but I think they are coming from people who haven't played a lot of games in the genre-- the camera is no worse than the camera is in ever game of this ilk. I finished up with 69 out of 105 pins & 34 out of 36 film reels. With the pins, you can't get all of them in less than three play throughs, I guess-- there are branching pathways that prohibit that. The missing reels-- I don't know where they are, but I'll find 'em! Anyhow, that sort of consumed my morning-- along with waiting for boots that still haven't come! I ordered a pair of big black Doc Martens on Wednesday with my Zappos VIP account & they still haven't come. I have a terrible confession-- I don't own a pair of decent boots. I just flit about the city in my Chuck Taylors in the winter like a city slicker without a care in the world. Totally unprepared. The Boy Scout who was drummed out for atheism in me is really disappointed. The Docs are serious business, though...I just need them to get here! Still no luck.

Eventually it was time to go to Kira & Nino's-- I was meeting Jenny there-- & so I headed out. On the way there I stepped in a slush puddle-- you know, the black pool that looks like asphalt, until you put your foot in it-- & picked up a bottle of white, a bottle of red, & a bottle of bubbly. Dinner was intense-- a white winter salad, with fennel & celery & sunchokes & cheese was the first course; the second course was pasta with lobster carbonara; sliced pork chops with a veal demi-glaze & a lemon & parsley crumble (gremolata) on top was the third & last we ate a banana cream pie. I walked around with a sleeping Olivia in a Baby Bjorn for the first chunk of the evening, which was cool-- she's getting closer to being interesting! She's at the point where she can fuss & almost make faces, so you feel like she's trying to communicate but is frustrated in her efforts. Anyhow, we stayed at Kira & Nino's till eleven-- we celebrated the new year along with La Paz, Bolivia! Then home, & my stomach was a bit of a mess, so I missed the actual ball drop. Ah well, good thing we're not a sentimental couple. 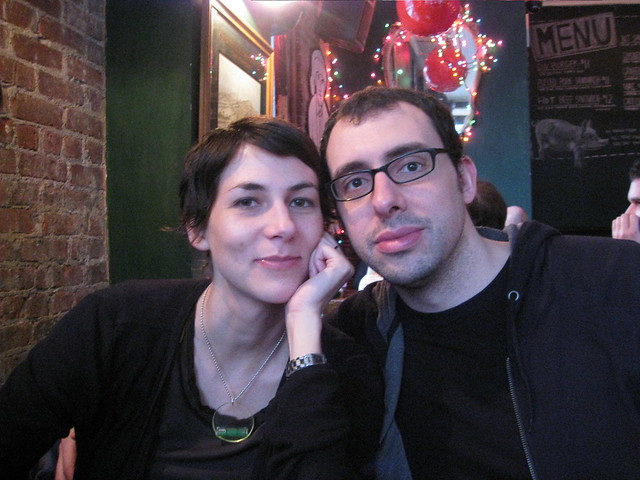 (Me & Jenny chilling out at The Double Windsor with Carla & Kenneth; photo by Kenneth.)

Saturday we met Carla & Kenneth for brunch at The Double Windsor. Well, I only ate hush puppies, since I'd eaten way too many bowls of cereal (five?) for breakfast. Also, because hush puppies rule. I had a glass of their Two Brothers Northwind Imperial Stout which was very tasty-- good enough for Jenny to order one for her next round. Russian Imperial Stouts are definitely my favorite kind of beer. Stouts & porters in general, the darker the better. You know, I just found out that the reason they are higher in alcohol content is so that they wouldn't freeze when the English brewers shipped it to Russia. How about that. I also had a glass of BrewDog/Mikkeller I Hardcore You, which is an intensely hoppy IPA-- blended from two other IPAs & then dry hopped another two times. Floral & with the same bite before & after, which was neat. Then, our bellies full, we headed over around the corner to The Pavilion, which I haven't been to since I saw the thrice-damned Last Airbender movie. It is such a dive, & not in a charming way. As much as I would rather support a small local theater, it is terrible enough that I'll usually go to Court Street.

This time we paid our money & put on our 3d glasses to watch Tron: Legacy. I don't know what the haters are talking about: Tron: Legacy was totally awesome. Unlike with Avatar, the CGI actually serves a purpose-- it isn't a lush virtual world telling a story about the glories of technophobia & nature, but rather a lush virtual world telling a story about a lush virtual world. I think the crux here is that people have crazy notions about the original Tron, like that it is good. No, see, Tron is awesome, but it isn't particularly brilliant. Tron: Legacy continues that tradition-- it is a movie about laser motorcycles & death frisbee, okay? & also, Jeff Bridges playing Hippie Obi-Wan Kenobi. Seriously, the parts of the movie that weren't an homage to the original...were referencing Star Wars. The CGI on young Jeff Bridges isn't quite there, but you've gotta give them credit for trying-- & since CLU is a Program, it isn't so uncanny valley. I thought it was pretty, & I thought having Flynn as a technowizard was a nice move-- I like the Hero's Journey that ends with the hero as the Gandalf of the next generation. The movie was relentlessly Caucasian-- black people exist, but not in any way that matters to the plot. Same thing with the Bechdel Test-- it fails, but not egregiously. There aren't a lot of characters, but really-- that isn't an excuse. It is the "Father & Son" story, which I'm sure is every one's defense, but really, as Jenny pointed out on the way home-- can you imagine a sci-fi adventure epic about the generational struggle between a Mother & a Daughter? Bah. The thing that redeems it is Quorra; Olivia Wilde nails it. Her hilarious sniggering while she rescues Sam sold me. She's not played for sexiness, which also helps...not that she needs any help. As I joked to Jenny: "Oh, the attractive robot ninja in a skin tight outfit with short hair & too much eye make-up? I might like that? Shocking." Still, she's a character who has agency. Not too shabby. Oh, & Yaya from America's Next Top Model was in it! Visually though, man, I could watch that all day; same thing with audibly-- the Daft Punk score was outstanding. I really enjoyed it & like I said, I don't understand people's complaints.

Aquilonia,
where sits, on a gilded throne,
the barbarian.

This was given to me by

fordmadoxfraud for Xmas-- one of the giant black & white collections, the equivalent to one of Marvel's Essentials. 544 pages long, fifteen issues in length, it is a monster. The Conan depicted here is much closer to the pop culture's perception of "Conan the Barbarian" then the actual Conan from the Robert E. Howard stories. Thomas' is much more the savage & the brute-- whereas Howard's is the rejection of civilization, & has an inherent nobility that Thomas' lacks. Over all, I thought that Roy Thomas' scripts were...well, way more misogynistic than Howard's text, for one. Not that Robert E. Howard writes anything that a feminist would really applaud, but characters like Valeria & Bêlit provide some agency for women-- & while Valeria is here, & Thomas' own creation Red Sonja, the vast majority of female characters are...well, literal prostitutes. With the occasional queen to play damsel & then fall into his arms. Not just Whore/Madonna complex, but also a constant threat of sexual violence. Not to my taste, to say the least. I think Thomas took a magnifying lens to the less savory elements of Howard's work. That being said, there were two stories that really stood out for me-- "Black Colossus" is one, with its demonic camel & half-ape charioteer? Magnificent. "The Forever Phial" is the other, with its fourth-wall breaking suicidal sorcerer. Tim Conrad's Conan isn't my favorite, but the rest of the art is great. The art over all really makes it; you can see how it set the stage in the zeitgeist for what "Conan" means.
Collapse