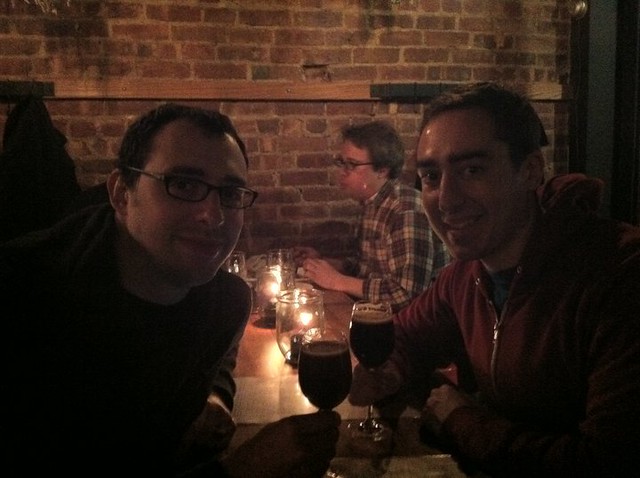 What have I been up to? A certain element of cabin fever set in; we really were quite snowed in out here, & since I've been on vacation I've mostly been taking the opportunity to do do absolutely nothing. You know it is a blizzard when you are startled by cars passing by outside. How are they getting up the road! Oh, it was plowed! After only two days of being blocked! Jenny & I went out once for drinks & dinner & I mused about how utterly similar that is to human behavior for the last 10,000 years or whatever. Hey, there was a storm, lets all gather in the communal place for food & drugs! Nothing changes in the Ridge but the seasons. Otherwise I've mostly stayed put & played Epic Mickey-- which is fun, & as someone said, embodies the "sweeping story arc, short tasks" principal. Oh, on Wednesday we had

elladorian back again for our weekly Television Night, & since

fatbutts couldn't make it, that meant LOST...& that meant we finished LOST! Finally, only seven months after it went off the air. From the unavoidable spoilers & people's recoiling reaction, I thought the end might be awful, but it was fine? Not brilliant, but once again that show was the victim of its own hype. Somehow people got it in their head that the show was amazing, or a game changer. It wasn't. The first season was maybe brilliant, but that promise never blossomed-- & somehow people kept expecting that it would. Anyhow, the show wanted to establish parity between the opening shot & the closing shot, & I understand that. Then yesterday Gerd & I went to the gym together! Gerd is in town for his annual visit & needed a gym-- I had a guest pass & voila! I'd been to the gym the day before & hadn't brought my headphones, so it was all anaerobic, no cardio. Then with Gerd-- same thing! He spaces out his cardiovascular work to a different day, so all he wanted to do was hit the free weights & the machines. Fine with me. I'm contemplating going again today & doing a load of cardio, but I don't know if I'm disciplined enough for a turkey. Three days in a row? Depends on if I beat Epic Mickey I guess. Gerd & I ended the evening at Beer Table, where we drank a glass of the Struise Black Damnation III, an imperial stout aged in whiskey barrels, which as you might expect was right up my alley. Going there with Gerd was the perfect touch, since he has had a similar journey with beer-- figuring out that "beer" doesn't mean the crappy American lagers you grew up with, basically. Then had a dream last night about The Joker & Grant Morisson covering Shriekback's "Nemesis" mashed-up with Wally Wingert & The Caped Club's "Adam West." So...thanks for that, brain.
Collapse