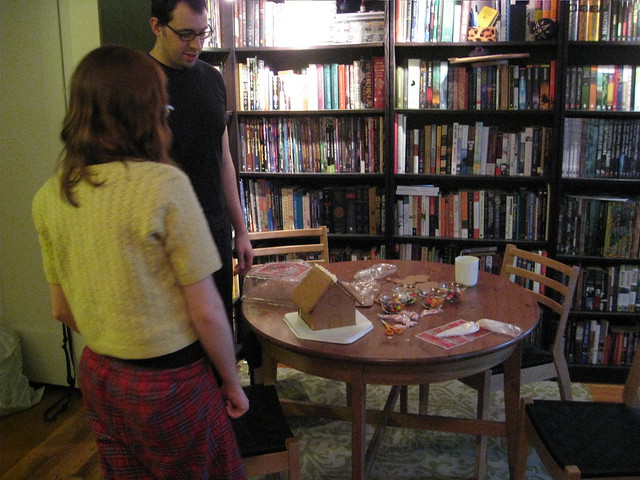 The rest of Xmas was actually relaxing! We rededicated ourselves to watching Avatar: the Last Airbender & ended up getting half-way through the second season. & I found out this morning-- I woke up at six-thirty & my circadian clock wouldn't believe me that I could go back to bed-- that there was an actual Avatar: the Last Airbender marathon on Nickelodeon. That show, seriously. I flitted about the apartment for a lot of it, goofing around online or whatever, but in then end I plunked myself down & started watching. It is just so good; like, there aren't any mis-steps, the world building is tight, it dances between technological & linguistic eras, has a blend of fashion & mythology that hints at a greater tapestry of culture...just astonishingly good stuff. At some point Jenny &

elladorian built a gingerbread house from a kit which we've had floating around the apartment for oh, five years. We made toothbrush robots from a kit that Jenny's dad sent us & drank espresso. Breakfast was all Jenny, & she made home fries & french toast, the latter of which we ate with maple syrup & this chipotle jam Maggie had brought. Lunch was leftovers, & Jenny added a dash of glitter to everything. Between lunch & dinner I made a Gibson with the cocktail onions Maggie got me...with vodka. Two things: one, I don't understand how anyone can have vodka in a glass & call it a martini. Two, my stomach was more or less empty, so that hit me a bit harder than expected! Jenny made dinner; pumpkin soup with quinoa & carrots, family style! I tried to understand what Jenny likes about our butter-- she loves this butter-- but I just can't. It tastes like butter to me, high-end butter but nothing special. I do really like it when Jenny caramelizes carrots in coconut oil, though. Somehow at the end of the night we got to talking about what the internet was like when we were teenagers, & that included "The Spark." We all took the personality test-- I used to be a Manchild (RBLD) but now I'm apparently The Boy Next Door (RGLD) which is hilarious, since I'm not. Jenny still had her results from when she took it in college-- she was a Battleaxe (DBLM). These aren't the old results, though-- that much is clear. The old test I was an Evil Love Taker, I remember, because that describes me pretty accurately, but the other axis switched when I retook the test. Ah ha! I was either a Conquistador or Senator. Anyhow, with that we cleaned up, packed David & Maggie away, & considered Xmas a rousing victory. I'd say Xmas is over, but I'm writing this by the light of a tree, aren't I?
Collapse