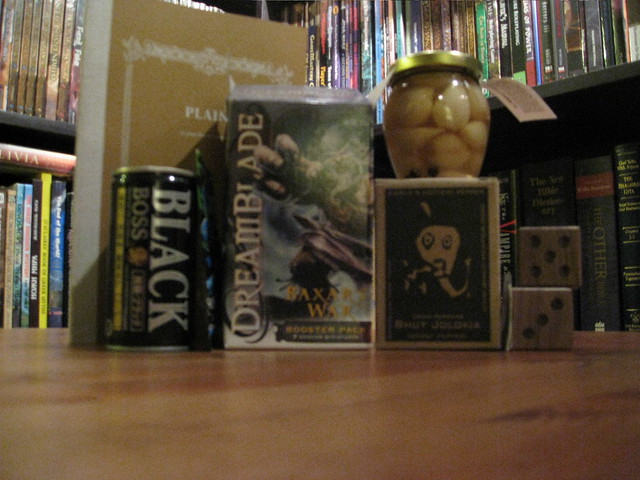 Xmas morning & everyone is asleep except me & Claudio. Fairly understandable; us bunch of oldsters were up till midnight last night! Well, first there was the feast

fordmadoxfraud spent all day making. Before we got into the meal proper, we started with an apple & potato soup garnished with chives, & a plate of meat & cheese. Then

elladorian arrived & things swung into high gear. Supper started in earnest with a salad of bitter greens & mushrooms: raddico, endive & romaine, with pine nuts & croutons, & shitake, baby shitake, hedgehog mushrooms, & chanterelles. I never liked mushrooms growing up, & while I've gotten over that, I've only managed to succeed so far in liking fungus. I like them-- but I only like very good mushrooms, you know? & I really liked the salad; I think it was one of the big wins. We threw on some Avatar: the Last Airbender-- we only watched five episodes, total-- while David finished dinner. I was the cleaning helper & Maggie was the cooking helper, & then Jenny & I did the big clean-up at the end. When it was finally finished, David served: Guinness mac & cheese, colcannon, whipped sweet potatoes, turnip & carrot puree, chestnut stuffing, brussels sprouts, asparagus, & braised quail. As usual, it was hard for me to focus on the main course, the quail, on account of all the sides. The quail were adorable; they were very deeply in the Uncanny Valley of food. You could definitely notice that they had been alive. I haven't had quail since my days as a young hunter! They are tiny. The gravy David made was wine based, & I think I have to say colcannon with gravy is the evening's winner. They were going to have leeks in them, but that slipped through the cracks, which has the end effect of making me really look forward to next time. The Guinness & macaroni is always wonderful, & I haven't had it in years, somehow! That takes second place, tied with the salad. As you can see, I'm a sucker for the starches.

After that...loot! We opened our stockings! I got: two lottery scratch cards (not winners), two giant wooden six-sided dice, two Xmas themed temporary tattoos, & "ghost pepper." Bhut Jolokia, a pepper that is 1,000,000 SHU on the Scoville scale...compare to jalapeño's 3,000 to 6,000 or habanero's 300,000. There are spicy watermelon candies with it, "bumps" of crushed ones, three dried ones, & a vial of ground up powdered pepper. Yikes. I also got a can of Black Boss coffee from Japan, some pop rocks, & a container of Dreamblade minis! Dreamblade was some weird "nightmare monsters fight each other" game, but I like to use their miniatures to spice up encounters-- busting out a non-Dungeons & Dragons mini always throws players for a loop, & if it is a guy with meat cleavers for hands, so much the better. Okay! Now David & Maggie just walked into the room in their footsie pajamas, & I'm making Jenny go change into hers so that she can match for Xmas, then we will open presents. The spirit of the season for me is Greed! 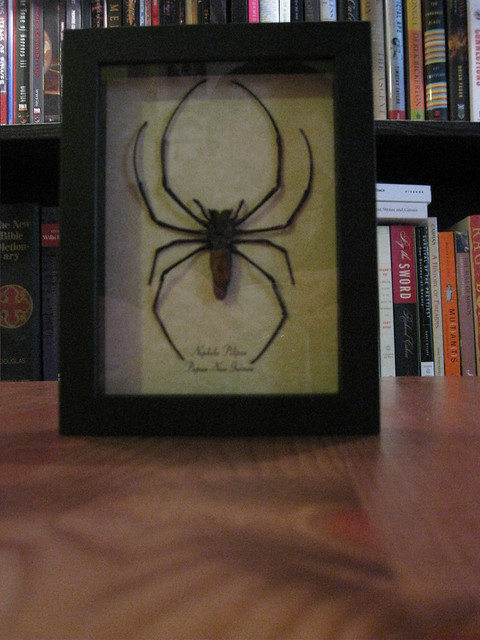 elladorian. I like the way this spider is laid out-- the backing paper & the genus & species name at the bottom. On the back, it has a little blurb about how the insects & arachnids from this place are all raised in cruelty free farms by native peoples, so they don't have to, you know, strip mine or slash & burn their land, or raise cattle, or anything. Also, I have officially retconned my Dark Lord of the Sith origin. If Luke Skywalker grew up on a moisture farm, than you can damn well believe I grew up on a spider farm! Then David & I cracked ourselves up making jokes about it. "What I really need is a droid who understands the binary language of spider incubators!" 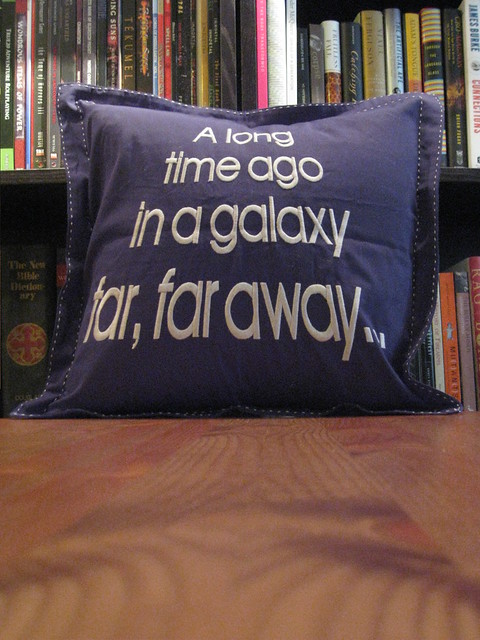 A Star Wars pillow from Jenny! I don't know where we'll put it, but I am excited to find out! Does it go on the bed with the other throw pillows? I like that Jenny supports making our home as geeky as I am. Well, as we are; it isn't like she isn't a huge nerd, too, just a different stripe in some categories. This came from "Pottery Barn Kids," which says a lot. I often joke that my interests are basically the same as an eight year old's. I stand by that. 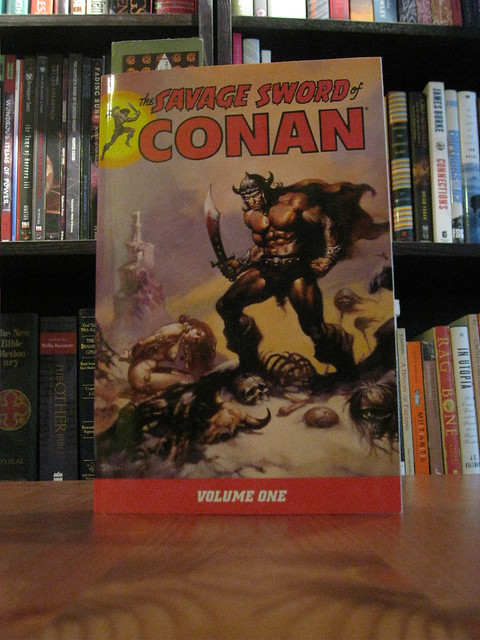 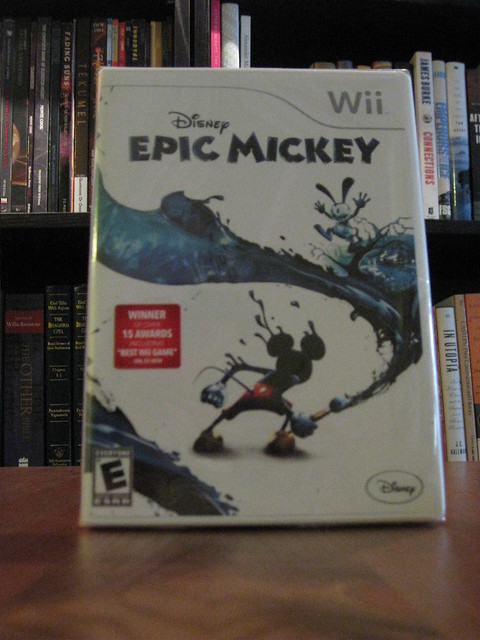 Epic Mickey! I'm really looking forward to this. I've been excited ever since they announced that there would be an evil steampunk game set in a mirror-mirror Disney World. The concept seems weird-- all about painting & stripping paint, tints & turps. I haven't popped this in yet-- we are back to watching Avatar: the Last Airbender, & are now on the first spirit world episode-- but I am looking forward to it. Also, talking about Kingdom Hearts in relationship to this is pretty funny-- "It is basically a game where Cloud Strife hangs out with Goofy & Sephiroth hangs out with Jack Skellington. If you are into that kind of thing, then it is awesome." Thanks Jenny! 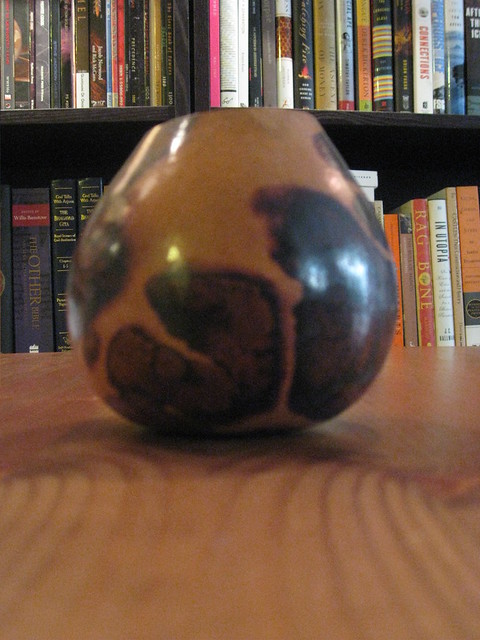 Another present from Jenny! Maggie gave me a mate gourd a few years ago, but then earlier this year it fell & cracked, rendering me yerba mate-less! So this year, Jenny got me a replacement. Exciting! I still have to cure it & stuff. Okay-- I'm being yelled at to come drink bloody maries & eat breakfast, so there. Xmas loot! 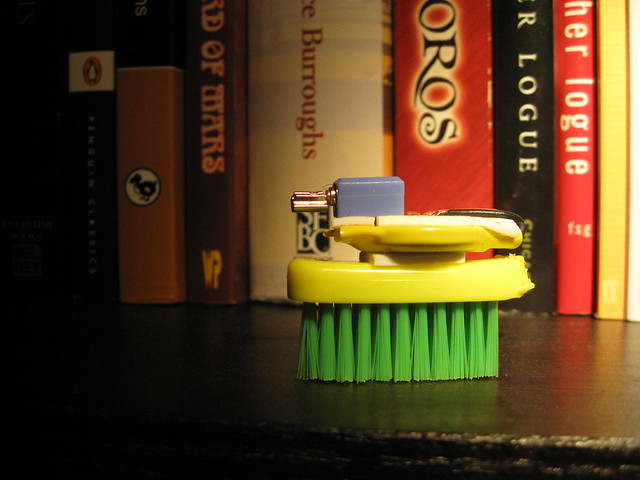