Looking at my neighborhood demographics & it pretty much lines up with my experience in the Slope. When Nate Silver said Park Slope was the best place to live in Metropolis he ranked it abysmally in the "Diversity," which didn't totally jive with my anecdotal evidence. Of course, widen the search up for the whole neighborhood & it is overwhelmingly white-- I'd eyeball it at 75%? Still, my slice of the pie--the 52% White, 10% Black, 25% Hispanic 2% Asian & 11% Other-- basically lines up with the picture in my head, though I think I come into contact with more black people in my day-to-day life because of the YMCA, which services a wider circle than just my census district. Anyhow, just curious-- looking at the map reveals demographic truths that people often gloss over or hesitate to say out loud. Like, look at the racial break-down on either side of Prospect Park, for instance. Also, for a fun comparison-- where I grew up in the Wasteland is 93% White, 0% Black, 2% Hispanic, 5% Asian & 1% Other...which is think is fairly generous, or has shifted since I was a boy, when I think white people would have been in the higher nineties. I was wondering about my life, though-- the demographics of that. My workplace is fairly white washed; not totally, but it ain't the most diverse place, over-all, though doing a quick count of my peers comes out pretty interestingly. What about casual contact? Subways are a great equalizer; riding on them should be mandatory. I don't know, I don't have a real thesis or argument to make here-- just playing with a new toy.

fatbutts-- with no Lilly the time had come to catch up on LOST. Yeah, I haven't finished watching that show yet. First we cracked ourselves up laughing about a "junk of coffee" with

fordmadoxfraud to show his face & come in from the cold. The beers were Arbita's Winter Ale (unimpressed) & Long Trail's Hibernator (also unimpressed). The show was what it was; the boys cast as young Jacob & young Man In Black where good, but Mother Witch wasn't. The real high light lately has been Desmond in the alternate reality-- his grinning machinations are wonderful. Of course, there is the old stand-by Ben Linus; Ben really is the best thing to come out of that show. Yes, Ben, a thousand times yes. Then I played the game called "Well That Happened." That is the game where I bench press pillows while we put, for instance, a television remote on top of the stack, or Maggie's telephone. I don't know, we were all in a very silly mood!

There was some other television this week, as well-- the day before I went to the gym, did a good clip in my hour fifteen & all that. I wasn't as perfectly tired as I'd been on Sunday, though. Still, not too shabby, though I am busy tonight & tomorrow, so there will be a bit of a lag in the "every other day" scheme I'm trying to cleave to. Picked up Mexican food, ran some errands & then came on home to watch Human Target. Another fun episode of that show; they really need to stop making Ilsa "uppity" though. & I hate having to call her uppity-- I don't mean because she's a lady or anything, just that she's the Wesley of the show, the one who naively needs to be put in place by the professionals. It isn't flattering or good storytelling. Still, exciting gun fights & clever bits-- it continues to be an eighties show, every inch. It inspired me to play the heck out of some GoldenEye. When I'm on a roll, I'm very good, but when I'm distracted I'm inclined to just go on suicidal shooting sprees. Either I sneak, stalking from cover to cover, a wolf in the night...or I run into the room shouting, spraying a hail of bullets this way & that. Anyhow, I am now at the point where I drive around in the tank, so that should be fun. 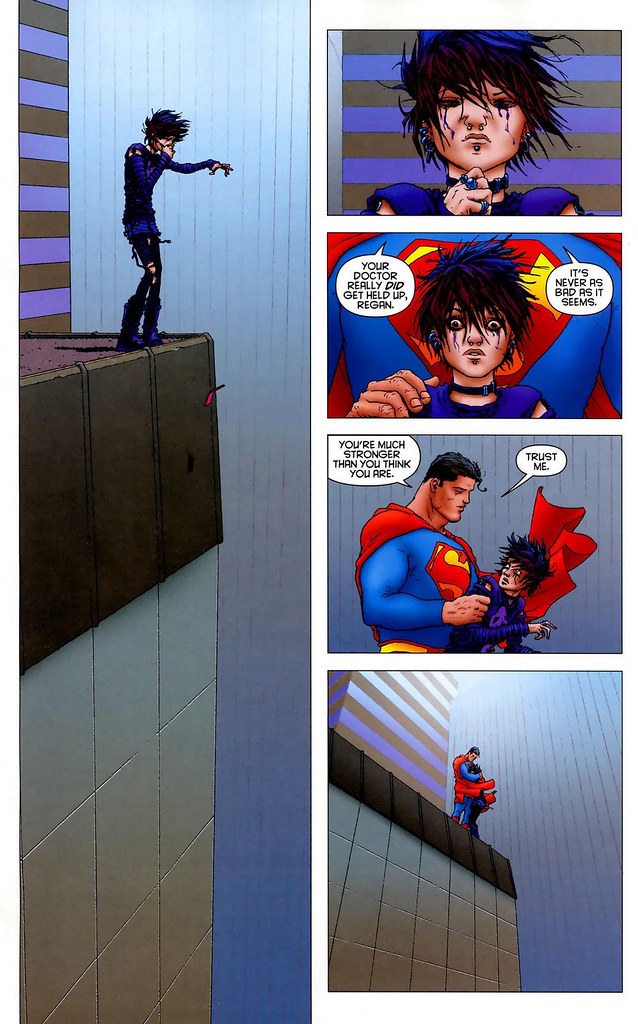 One night I dreamed I was walking along the beach with Superman. Many scenes from my life flashed across the sky.

This bothered me because I noticed that during the low periods of my life, when I was suffering from anguish, sorrow or defeat, I could see only one set of footprints, so I said to Superman,

“You promised me Superman, that if I followed you, you would walk with me always. But I have noticed that during the most trying periods of my life there has only been one set of footprints in the sand. Why, when I needed you most, have you not been there for me?”

Superman replied, “The years when you have seen only one set of footprints, my friend, is when I carried you.”

8 The monolith never fails. But where there are prophecies, they will cease; where there are tongues, they will be stilled; where there is knowledge, it will pass away. 9 For we know in part & we prophesy in part, 10 but when completeness comes, what is in part disappears. 11 When I was a child, I talked like a child, I thought like a child, I reasoned like a child. When I became a starchild, I put the ways of childhood behind me. 12 For now we see only a reflection as in a mirror; then we shall see face to face. Now I know in part; then I shall know fully, even as I am fully known.

13 & now these three remain: magic, science & the monolith. But the greatest of these is the monolith.
Collapse