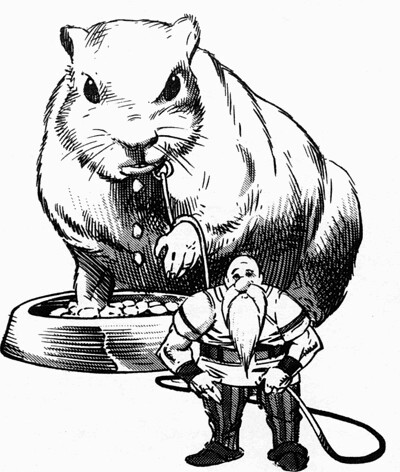 Where's the basic plot of this thing coming from? Apparent gibberish isn't it?

Now let me Rorschach that apparent gibberish... I see Puwek, Rog, Goper, we9, asropgfui, Lvkask. Now, what can we spin out of that. Puwek sounds Inuit to me. Rog was a giant praying mantis worshiped as a god, a la King King, in a game I played once. Goper looks like gopher. We9 makes me thing of We3-- cyborg killer animals. Asropgfui? Astro fungi, clearly. Lvkask sounds vaguely like the name of a military base in GoldenEye. Great. So-- there are races of tunnel people recently discovered by explorers, spelunkers, living far under the icey ground. The Puwek are descended from aboriginal people, displaced into the depths; they now worship the Mantis called Rog. A secret military base called Levkask is also under ground, experimenting on animals with strange devices, making killer golems. They are in a kind of cold war-- but really, the spreading infection of the sentient Mi-Go is the problem they should be worried about.

With a side of what? The mastermind here is a (random monster)

"What on earth..? It's an ocher and slimy humanoid with brown hair covering parts of its body!"

Well, there seems to be a cultist-- & you can't say ocher without making me think jelly. & hairy? Sounds like a yeti must have come down here with the Puwek, & initiated contact with the Mi-Go. Now it is a debased mascot-- things are spiraling out of its control, & the only option left is to embrace it, spread the fungal infection every further.

Where am I going to get an idea for the big, crazy fight? That Jack Vance story with the eyeball-collecting monster.

Did I even read that one? I have a big Jack Vance influence in my running campaign, even. Eff this, I'm going to say-- okay, the Mi-Go are into brain stealing, but these guys want the eyes, too-- & don't collect in any particular order. Lots of fights-- & when the Mi-Go or fungal goons steal any PCs eye, they flee. Lather, rinse, repeat.

Resistance to the expansion of the social safety net stems from tension between two competing traditions. Ronald Reagan took a stand against Medicare in the 1960s."

Alright-- well, it seems the fungal infection is being viewed as a cure-all; the regeneration & fast healing it brings to the infected are being heralded as advances in medicine, despite concerns of being turned into an eyeless, brainless goon. The surface dwellers are talking about adding the spores to the water supply for the benefit of public health. Only an old, washed up actor knows the truth of the spores & the astro fungi.

The multivalent trick the PCs can fuck with and turn against the adventure? Roll a random monster. Build the most stereotypical situation you can around this monster. Investigate all possible naturalistic inconsistencies in said situation.

"My goodness, there is a blue glowing spider-like creature with green eyes!"

The space spiders are here to feast on the Mi-Go. & anything else that they might feed upon. Naturalistic inconsistencies...why do the spiders eat fungus? Well, they are spider-like, but lets step back from that. Clearly they don't eat the Mi-Go, they eat the infected. As a rule; PCs could probably convince them to change their pattern? They are certainly sentient. Weird, but sentient. How would they interact with the alpha predator of the mantis-god, Rog? Play it by ear depending on what would make the most sense.

Goblin. Biscuit Goblin. Holy crap, they are gingerbread goblins. Bazooka. Gingerbread Goblins with Bazookas. What the hell? Okay, thanks brain. I'm guessing these guys only appear after an encounger with a wandering William S. Burroughs.

Nondeath situation-altering punishment a PC might face? The Civil War (not the Marvel comics one, the actual one).

So there is a portal to Boot Hill, eh Gygax? I'm guessing that between the green-eyed spiders & the astro-fungi & the wandering William S. Burroughs that space-time is pretty thin & frayed down here in the tunnels. Okay-- be BRUTAL in fights with a wandering Burroughs-- any time they die, they wake up in a Civil War Triage tent in the dead of winter. They are stuck there until they can escape the tent & find a friendly home to take them in. It is the holiday seasons, but everything is a little bit...off. See also, Gingerbread Goblins, maybe a winged marilith as a tree-topper, so forth. Whenever the helpful Southern Belle or Yankee Doodle that has taken you in leaves the room, they all animate, jeering & goading you-- but hopefully towards returning to your rightful world.
Collapse