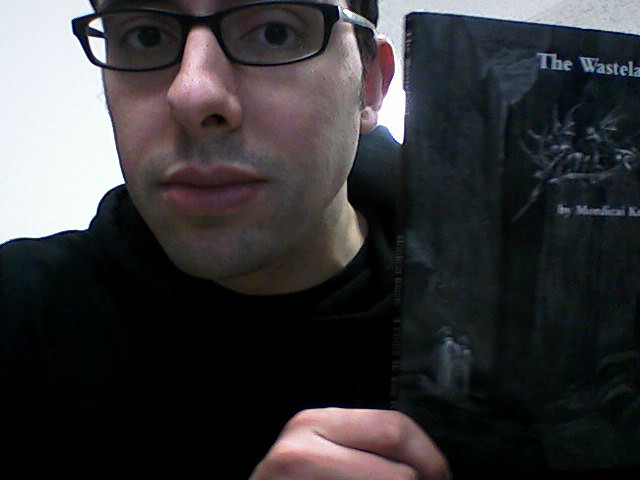 (Me & my NaNoWriMo novel! It finally came in.)

Yesterday night was nice, just a pleasant do-nothing evening. I need more of those; I am basically back & forth between the extremes of hermitage & social butterflydom. Pendulum, swing! I came home & didn't change into my pajamas, knowing we'd need to pick up dinner-- I'm wise! Eventually it was decided that we'd eat at the Park Slope Ale House, so I went there & picked our supper up, & came back.

onatopofthings had given Jenny the Avatar the Last Airbender video game called "The Burning Earth," so we played some of that, & we watched the new episode of Leverage-- it was an X-mas episode, featuring Wil Wheaton & Dave Foley. Well, really it featured Parker in a variety of holiday costumes; super cute. I also played a bit of GoldenEye-- it is a lot of fun but...kind of buggy? In the "Nightclub" level I had to restart because the game became convinced I had -1 ammo, & I couldn't get out my smart phone. Last night on the "Siberia" level it just locked up with a blaring "AHHHHH" & I had to restart again. Which is a shame, since I was stealth-murdering my way through it like a champ-- on replay I was much more likely to get impatient & turn things into a running gun fight. Still, a lot of fun. I've been trying to control my portion sizes-- so I haven't been going as out of control as I typically do. I'm like a dog-- I'll eat till my stomach hurts. Oh-- I have been power lunching, though.

ravenface & I went out yesterday-- I had the franks & beans, he had the salami, & they call us...The Aristocrats! Anyhow, I laughed. Today I went out with Nick Courage today for Indian; even though it was all you can eat, I didn't gorge myself. Only by luck & last minute remembering, but good for me.
Collapse