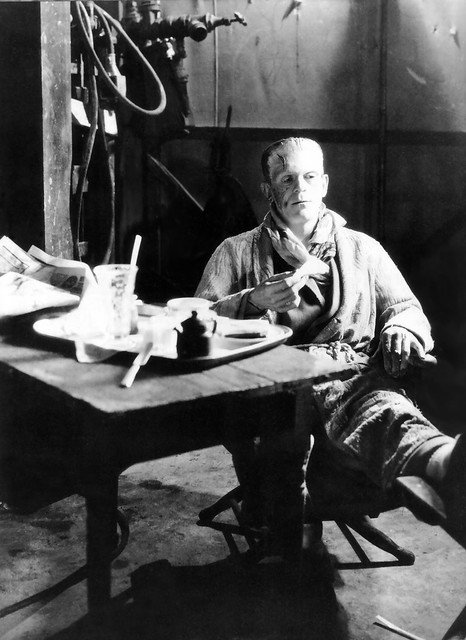 The weekend continued! Sunday morning wasn't too bad-- I made home fries, Jenny baked some eggs on top of that, & then we watched Saturday Night Live. Paul Rudd is hilarious, for a number of reasons; not least among them is Celery Man, but also we have longstanding running in-jokes about him. Whenever Jenny & I are acting like exasperated teenagers we channel his performance in Wet Hot American Summer, & basically any time a picture or an animated .gif of him comes up on our feed readers our clique re-shares it & insists that it is

fordmadoxfraud. & for the kicker there is the fact that Role Models is an awesome & under-rated film, & probably the most nerd-positive movie I've ever seen. Anyhow, he was very charming, but he also said (in character, but whatever!) that his dream was to play the emcee in Cabaret! That is a great dream, good for you. Jokes about Cabaret will always win with me. Anyhow, the gaps in the rest of the morning were filled by me playing GoldenEye-- I'm getting better as I learn the logic of the game, as I figure out when I'm meant to sneak & when I'm meant to go in guns blazing. It is sort of mid-way between your Metal Gear Solid & your Halo.

Then it was off to Perch to see our dear Mister

ravenface. He was in town to keep his Metropolis connections fresh, wet. He's a jolly old elf indeed. & it was quite the shindig! We were joined by

fordmadoxfraud, as well as Dave, Ashley & Lois, who wore an IDIC pendent, & only I knew what it was, for I am supreme among geeks. We played catch-up with Simon & I ordered the huevos rancheros. It was perfectly tasty, but a bad idea for two reasons-- one, black beans don't agree with me. They make unpleasant bubbles in my stomach. Two, the eggs florentine was what I wanted, really. I need to remember that-- it always comes down to me getting eggs florentine or some other option, & then when someone else orders the eggs florentine-- David, in this case, who was the winner-- I go with the other option for the sake of table diversity. Next time I won't be so foolish. The eggs florentine (& benedict) are on "spoonbread," which I'd never heard of-- when I learned of it, Simon teased me saying that I would tweet it immediately-- so of course I had to. It was lovely playing catch up with the Lion Pinball Players.

After that, the gym! I had a really good workout yesterday, I felt pretty good about it after a slapdash Friday. I just left feeling that sublime mixture of tired & exhilarated; I did the right about of weights & cardio & machines, while balancing reps & sets & weight. If I could keep doing that every other day, I'd be sitting pretty. There has been a software update to the elliptical machines-- some of them have had the update for a while, but I've been sticking with the ones that didn't. Now, they all have it-- the only noticeable difference is that the difficulties have changed. Now a "17" is much harder, & I find my speed slipping under six miles per hour. After the gym & picked up food from Corner Burger; the eponymous burgers along with mediocre coleslaw & tasty fried pickles. While I waited for the food a football game was on-- an old guy engaged me about it & I was able to fake knowledge pretty well. I don't hate football as much as most sports because things happen in it-- a guy catches a ball & runs far, or someone hits him; they cross the line or they don't; that kind of thing.

Back at home Jenny & I watched Human Target-- I do like that show but they need to fix Miz Pucci; her character as the annoying boss is grating. Still, the thief is a nice add to the show. After that we watched Pysch because they had an episode called "Dual Spires" which was just one huge homage to Twin Peaks. Sheryl Lee, Sherilyn Fenn, Ray Wise, Dana Ashbrook, Lenny Von Dohlen, & a host of other characters were cast in it-- even the Log Lady was there. Julee Cruise did the theme song of the show for the episode! It didn't really make me want to watch Psych but it sure was nice to see old friend. It ended with Dana Ashbrook ("Bob" in reference to his role as Bobby Briggs) staggering backwards as a one-eyed Jack in a red suit danced. Just...nice. After all was said & done I threw on GoldenEye & played around. I'm getting better at it, but the escape at the end of the boat level was really tough for me. I kept getting blown up by missiles. Frustrating. Eventually I just rededicated myself to the task & paid closer attention, with greater patience, & that was that, I was free & clear.
Collapse