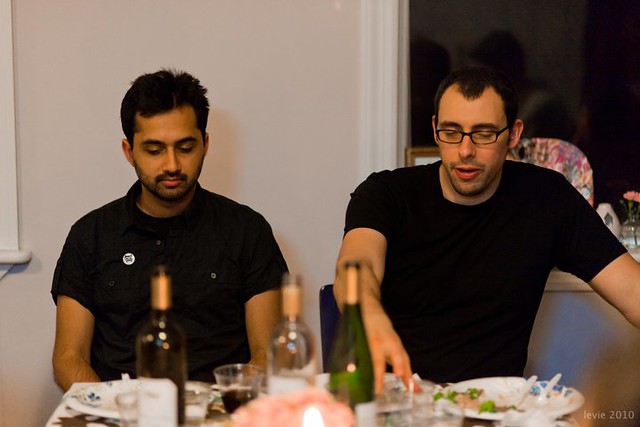 Saturday! No, wait, let me do Friday first. After work I stopped by Babies Я Us to buy a pacifier & then I went home & hit the gym. I only did a half-hour-- I cut out the cardio & such-- because then I went over to Kira & Nino's to meet Jenny & hang out with baby Liv. She is starting to look at faces-- not reliably, but she's trying. We ate sushi-- a whole bunch of sushi, from Geido. Once, many years ago I ate there on my birthday & got food poisoning, so I haven't been since. I will say that the Spanish mackerel (aji) was really fantastic-- I mean, some of that is due the seasonings, so it isn't exactly subtle, but I was really into it. The five of us hung out-- five of us, since I'm counting Olivia-- for a while. Olivia is going crazy with feeding, she's been going non-stop, so there is probably a growth spurt on the way. That ought to be fun. I held her & sang to her & walked her around. Hello, small mammal. Eventually Jenny & I realized it was late, & we came on home. Good thing too, since I slept like a log; I went into deep hibernation & apparently missed ruckus with heating oil trucks & such. Out light a light. Douse the glims!

Then it was Saturday. Jenny & I decided it was time to get rid of the three bags of books we had floating around the apartment, so we called up

fordmadoxfraud & bugged him to take us to Kit Marlowe & Co. We got showered & met at Brownstone Bages & Bread Co. to have the first of the very few meals of the day. They were pretty good; they've got a vat for boiling them & all that. Then to the new store! Well, it isn't new per se, but I hadn't been there yet, & neither had Jenny, so we poked our noses around. I like the display space! That is always nice, to see things flourished just so. Also nice to see Dante &

toughlad who I haven't seen in a month & a half due to NaNoWriMo, which is like, the longest I've gone without seeing that dude in a while. After that we came back to the Slope & decided that lunch-- well, dinner, really-- would be a good idea, if & when

elladorian might want to join us. Note-- that is us skipping lunch; instead we went to Mission Dolores for drinks while we waited.

It was Jenny's idea to get drinks but I championed Mission Dolores, since they have a well cultivated beer list, & I was rewarded! I got what I wanted out of life. I've been craving the Captain Lawrence Smoked Porter lately-- they have it on tap at the Park Slope Ale House & I simply adore it. I guess that is something that happened during the lost month of November-- we started going there a little more frequently. I'm getting off track-- the point is, Mission Dolores had it, & I wanted it, & yum. Then! As an added prize for yours truly, they had Goose Island Bourbon County Stout on tap. Oh man, that beer is right on; I gave David a sip & you could see his toes curl in his socks. Jenny & David both got more mild drinks, & I feel confident saying that my dark choices won the day. David had the Six Points Mad Scientists, a spelt beer, which was fine but didn't make me want to write home. No-- the Bourbon County Stout was the thing for me. I have been having the 2008 bottles lately, which are way more mellow-- this was the 2010 brewing & it had whiskey bite. We finally bundled up & left...just in time to get a hold of Maggie!

I had another winning idea: Ethiopian! We were just a few blocks from Ghenet & we were all hungry like the wolves, so the solution seemed evident. Gorge ourselves on chopped up things & injera bread. Maggie met us there & we went to town, hyena town! The Ghenet special has four selections of meat-- doro & sega wat, where I know wat means stew but I don't know which is Amharic for chicken & which for beef; also two other kinds that I don't remember 'cause I never knew-- & then eight selections of vegetables, which let us cover the spread of everything. Maggie is vegetarian, so she went to town on those while we played the field. I like Ethiopian-- back in the Wasteland I used to go to Empress Taytu all the time, & yeah. My jam. Maggie had a pear cocktail-- the waitress whispered its secrets but far to faint for us to hear. The "olive" in it was a round core of pear that was very tart, like it had been pickled in lemon juice. The four of us really did a number on the dinner-- I mentioned us not eating, but Ethiopian definitely made up for it. Crammed full of foodstuffs, we made ourselves ready to go to a party, only to find out they weren't ready for us.

We all walked over to our apartment to kill some time, stopping in at Bierkraft for a present to take with us to the soiree. Here, I again got my way! We all played GoldenEye multi-player until it was time to leave. David is best at it, though I do think his use of the automatic shotgun is part of it-- still, he whupped me up & down the level fair & square. Of course Odd Job was off limits, but I wonder if they've repaired him in this edition? Anyhow-- nobody knows how to throw grenades, so it was all a bit slapdash. Eventually we bundled onto the F train to go to the tree-decorating party that Will & Jon & James &

skycornerless & Edbury were throwing in their commune. There was mulled wine & hot buttered rum & pumpkin cookies & ninjabread men & egg nog. & naked Edbury, & sinister Space Jam heads & rolling up Gamma World characters-- I got a Hyper-cognative Cockroach. Earlier we'd showed David Star Trek: Tik Tok, & we put it on again for those who'd missed it. It really is the only good to come out of this whole Ke$ha situation. After a little while though it was time to round up the ponies & go; home again home again, jiggidy jig.
Collapse