Dungeons & Dragons Essentials: Heroes of the Fallen Lands by Wizards of the Coast.

Then: the four heroes--
brawn & brains, faith & magic
to the dragon's lair!

I've been a big defender of the Fourth Edition of Dungeons & Dragons but I have to confess...my dedication is flagging. In part because I haven't played it in a while, sure, but there is a deeper cause-- because I tried to run it. Or more to the point, I tried to run it for novices, newbies to the hobby in general & the game in specific. For people like me, people for whom "to hit" & "resist fire 5" are second nature, the Fourth Edition is great fun...as a battle simulator. Players who lack the underlying grammar of the game, though...well, it is a hard sell. What options do they have? Shooting fire out of their hands or shooting light out of their hands? Ugh. No, I will admit it-- I'm turning on the Fourth Edition. I'm souring. I keep saying that they could fix it, they could pull it back from the bring. A Book of Utility Powers, for instance, would go a long way towards assuaging high-end players who see nested combat options with non-combat being a sort of ad hoc appendix. You could replace Rituals with a more robust Skill Challenge system, for instance-- heck, you can make Players start Skill Challenges. Really, DnD 4e forces the players to be passive, reactive-- or murderous, because the only option that they can initiate on their own is by rolling initiative & making an attack.

Essentials is a volley to try to fix those problems-- at least a little. It is a valiant effort, but not enough of one. On the plus side, it is backwards compatible-- at least in theory the Essentials characters are balanced with the various Players Handbooks. There are nice touches-- I like how they present the attribute arrays-- but they don't really fix any underlying problems. The classes are elegantly pared down, but-- well, lets look at the attributes. A few pluses here & there aren't really all that crucial. The classes can be optimized, & then...voila. That is the endgame. Sure, skills aren't entirely worthless, but they aren't really important. There isn't enough there, there. A lot of the things I learned when I was flipping through the various 4e books as a Dungeon Master are reflected-- like, there aren't very many interesting or simple magic items, are there? Lots of If-Then items that do something for a turn, but nothing that you could give someone & have them go "wow, neato." Same thing with feats-- I've complained about feats in every single one of the books, you'll notice-- you end up getting a list that has been culled from the giant rat's nest of the general list, feats that a new player might actually find attractive & it is...pretty shot. Just a list of various +1s & +2s. I like the classes-- hey, they have diversity, they have their own progression of powers!-- but I like them as an advanced player. They are simpler than the Players Handbook equivalents, but it doesn't go as far as it needs to. Maybe the solution is less powers up front but a faster initial level gain? I'm not sure.

More & more, though, it is dawning on me that if I want to take my co-workers on an afternoon adventure, I might be better served using another system. This is just too much of the wrong thing. New players don't see a swarm of rats & go "well, I can still relentlessly attack it with my sword, even if it only takes half damage." They see it & go "oh man, a bunch of rats, eff that, I close the door." & don't want to punish that-- I want to encourage them to portray plausible characters & to find innovative solutions. DnD 4e doesn't assist innovation, it hampers it. It is an attractive hammer-- I really find the fights engaging & fun-- but it makes everything look like a nail. There are lessons in here to be learned-- I am fine with Dragonborn & Eladrin & Tieflings, I think that giving every class at-will & daily powers is a great idea, i like the pantheon better than any of the previous-- but there is a lot that should be discarded. A +1 bonus is fine if it is constant, something you can factor into your character sheet. A situational bonus? Should be much better. A very situational bonus? Should confer amazing benefits. A +4 vs. poison? No, come on. Hardly anyone gets poisoned-- make it immunity to poison. I would like to see Wizards of the Coast to something really shocking, really simple. A skeleton system, a one-sheet character. That would wow me, that would impress me. Until then, though, I think I will stick to running the Storyteller system...which is already a one-sheet system, basic & adaptable. I'll still play Fourth Edition-- it is fun, like I've always said-- but I'm increasingly of the opinion that it just doesn't suit my Narrative style. 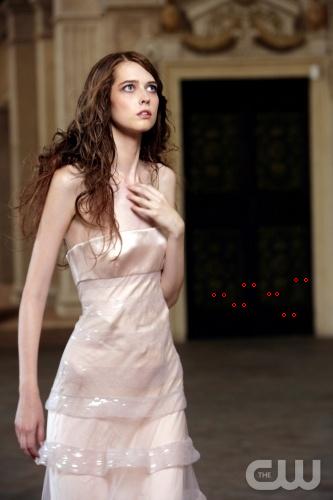 It was the end of an era! Or a cycle, anyway, & Ann won! I think America's Next Top Model is making the right decision to start making themselves a weirdo mill. Quit turning out these bland winners that get forgotten immediately after the episode airs! Make more like Nicole & Ann! You know Creepy-chan should have won, & Shandi too. Now you are on a roll, picking the interesting girl as winners. Kudos. I know you are a huge nerd, Tyra; roll with it. Seriously, I saw your "motion editorial"-- Disturbato-- & you are a big old freak. This is why we watch, not to see some boring girl take it home to Iowa & vanish. Anyhow, that was my evening-- just me & Jenny & Lilly. Lilly brought Archie, & forgot to feed him, so he was frisky! We drank a bunch of beer from Anchor brewery-- the stout & the X-mas ale-- & had a nice time. Dinner was Rachel's-- Jenny didn't get what she wanted, so we swapped. That...pretty much sums up how I spent my first day free from NaNoWriMo's shackles. Tonight I'm going to go to the gym; between my hurt arm & the writing blitz, I've been lazy about it; or at least, lazy about my upper body. On the plus side, my legs look fantastic! It gets dark earlier, & I like that. Jenny & I have started watching Cougar Town, after hearing that it defies expectations to be an okay show. I'd say that is an accurate summary of it; it is surprisingly fine, for the most part, & occasionally a shot strikes home. Otherwise, I don't know what I'll do with myself. I caught up on my work stuff from vacation, but now it is time for teleconferences, & I'll fall behind again. I guess Jenny was right when she said I am frequently playing catch up! 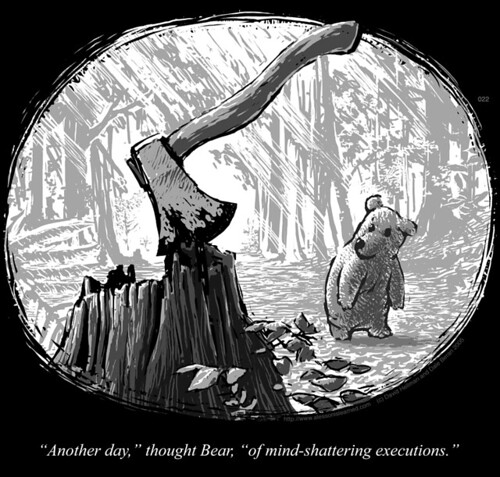