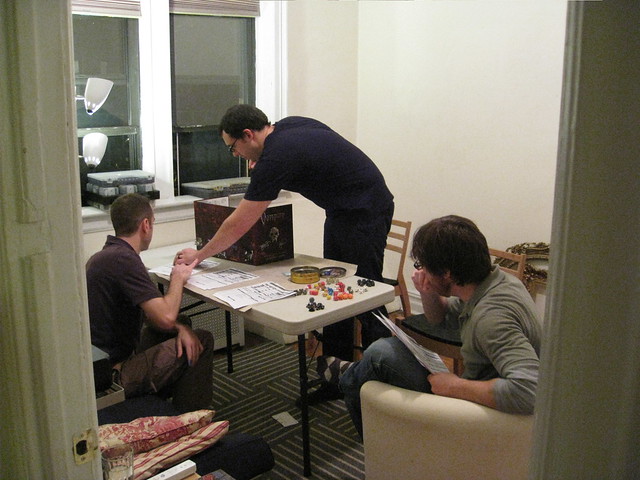 (Setting up DnD & picking out dice in Spare Oom with Brian & Matt; photo by Jenny.)

Slept in all the way to eight o' clock today, which hasn't been my usual modus operandi for a bit; lately I pop out of the sack at six thirty whether I want to or not. Possibly attributable to my upstairs neighbor having three bouts of raucous intercourse at five am last night. After a while it didn't sound fun; I think her friend might have been having trouble arriving. Anyhow, I am not complaining-- it didn't go on for too long & they've got every right to have loud sexy-times (© T-Rex) every other month or so. I'm mostly glad that the loud neighbors didn't come home drunk with a tribe of morons. The "loud neighbors" are actually just kids, you know? Young twenties, out drinking till closing time at four. They don't play loud music, but their braying donkey-like laughter makes me want to throttle them. So; that is what happened to me last night! Well, the very tip of the night's iceberg. Or wait, I suppose the sleeping part is the bit of the iceberg under water, since it is eight mysterious hours unconscious. The tip is the part where we are awake! Jenny & I drank a pumpkin beer & hung out for a while, then I went to get groceries & dinner. We ate hot wings & watched Glee, which is kind of becoming a tradition. Or anyway, we've done it three times. I liked the Rocky Horror Picture Show episode! There were complaints that getting a girl to play Frank-N-Furter they'd de-gayed the gayest thing ever, but I don't think so. Or I mean-- I hear that, I buy it, but also the episode talked about trying to de-sexualize the play (despite the number with Schuester & Emma) & I don't know-- Mercedes was a fun pick as the Doctor. I used to go see Rocky Horror every Halloween when I was in High School, so yeah, I have a nostalgic fondness for it. For the spectacle, not the source material. You know? In the bargain, Glee takes place in Lima, OH, which was the nearest "city" to the farm where I used to spend summers. Also, Meat Loaf & Barry Bostwick? Cute. We then watched the zombie episode of Community, which was adorable. I'm all kinds of a fan of that show, & have been since the get go. People have said "best. episode. ever." but I don't agree; I think the paintball episode is still the best. Such a watershed. Frankly, I'm just happy to get out of last week. I was busy at work, & I had my employee review-- which went fine as expected, but was a weird stressor all week, you know? Now I've got the weekend, & then I went ahead & took next Monday off to get cracking on my NaNoWriMo. I'm excited about it; I guess I should think of what I'll name it? I think I'll probably title it Blackguard, as a sequel to Watchtower Gothic, which was subtitled "Bootblack". I do already know what the first line is going to be. Actually; I might go ahead & call it The Wasteland & subtitle it "Blackguard."
Collapse