The Chessmen of Mars by Edgar Rice Burroughs.

When the Red world dies
& all life has been snuffed out,
Mother Brain will dream. 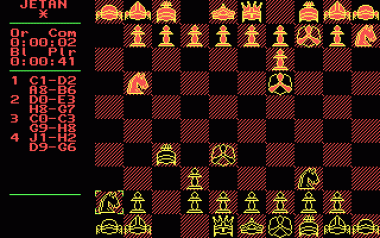 This is the longest of the three books in Return to Mars, & follows Thuvia, Maid of Mars in Edgar Rice Burrough's Martian novels. Where Thuvia... was in large part concerning John Carter's son Carthoris, Chessmen... is centered around Tara, John Carter's daughter. Lets get the discussion on gender out of the way upfront, since that was the first thing I though of, going into it. Well...it isn't surprising, on the front. That is to say, it isn't particularly offensive, but it certainly isn't progressive. Tara spends most of the book being kidnaped, & the action revolves around Gahan of Gathol, in his guise as the mercenary pathan Turan. Tara isn't helpless-- she knifes a guy here or there, & has a sense of agency, but that agency is constrained, as she is prisoner most of the book, being rescued from various strange captors. There is a constant threat of sexual violence-- "dishonor"-- but it isn't over the top or purient. It is just scary, & unpleasant, & as I mentioned, Tara stabs a few of the guys who menace her, so good for her. Gahan is fine-- it is sort of fun to have a regular Red Martian as the hero, rather than the omnipotent John Carter of the demi-potent Carthoris. I peeked ahead at the next protagonist-- it is a crippled WWI veteran Ulysses Paxton?

The show stealer is Ghek the Kaldane. I knew that kaldanes existed, from reading Wikipedia, but while they sound kind of dumb, in practice they were great-- the highlight of the book. A detachable head is high concept, & like any high concept, the premise sounds silly-- but it all lies in execution. Scuttling in the rat tunnels of the city, playing pranks on guards because you can't help yourself? Ghek, you are the number one sentient severed head in fiction. In a lot of ways, this book is the mirror image of Thuvia. Son & daughter, sure, but there are other themes that contrast each other. The noble A-Kor of Chessmen with his evil Jeddak father & slave mother is the reverse of Astok, with his...evil Jeddak father & slave mother. The Kaldanes eschew the physical, as the Lotharians of Thuvia did, but they are far more biological in their solution, rather than the airy philosophical illusions of the White Martians. Jetan, Martian chess, is the other winning idea in the book-- at one point Burrough demures that the reader may not care to hear all the rules...but he's going to tell you anyway. I thought it was a wonderful balance of the strange & the familiar; the pieces are different from Earthling chess pieces, but not unrecognizable. As usual, Burrough has a flair for the small touches-- saying the the Marian fruit usa, often used as rations for soldiers, would translate into English as "The Fighing Potato." That cracked me up, literally laughing out loud on the subway.

The Protomen: Intro / Breaking Out from Emma Story on Vimeo.