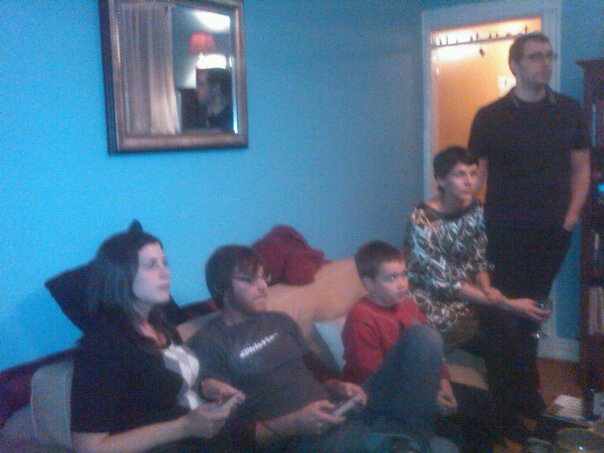 Sunday morning was pretty laid back; just trying to spend some time with Jenny, since I had a busy weekend & a busy week up-coming. I woke up (at six-thirty ante meridiem, since my stupid cicada rhythms-- I mean circadian-- always get me up then) & watched an episode of Batman: the Brave & the Bold, which had a great homage to the famous rainbow outfits of Silver Age Batman in the intro & focused on a meta-textual episode featuring Bat-mite & Emperor Joker. Jenny came out while I was watching it for the part where Batman gets gruesomely murdered over & over & was aghast. Yay for cartoons! I went to the grocery store & Jenny cooked up blueberry & walnut flax-seed pancakes & then we watched Saturday Night Live with Emma Stone; I liked it, particular the French teen drama sketch-- "Les Jeunes de Paris"-- & the local news parody warning about "souping," which was spot on-- oh, & of course Stefon, which still manages to be hilarious without being offensive. After that I went to run my game & had a nice time with that. Monday I grabbed lunch with

comeuppances, grabbing a Gruyere & pear & ham sandwich at 'Wichcraft & walking around Madison Square Park to look at the art exhibit, Scattered Light by Jim Campell. We only found two of the three pieces-- maybe "Broken Window" isn't up yet? I like hanging out with Sarah; it is cool that she's moving to Metropolis. On the way back we bumped into Nick Courage & I introduced Sarah as Sarah Courage, just being goofy. I didn't do anything last night, though-- Jenny & I watched How I Met Your Mother, which was fine. As I've said, the show has embraced its cliches, to its detriment, but Marshall & Lilly trying to get pregnant does hit close to home. Dinner was...grilled cheese with Gruyere & ham. I'll eat the same meal twice, I don't care. I also watched Mythbusters, with Jenny peeking over my shoulder. They were testing idioms; "when the shit hits the fan" & "getting cold feet." The episode was silly & fun, the myths weren't that interesting but the personalities were, you know? Then to bed; my stomach hurt then & it still does now; I've eaten some rice pudding & yogurt, & that seems to have helped. I didn't go to the gym last night, continuing to let my arm heal-- it does feel better, but I feel soft & weak. Trade offs. Then in my dream I was a paleolithic child learning to hunt & in order to teach us they kept killing our pets. They snapped my dog's back to teach me how to kill wounded prey. So I guess that was a repressed memory from 10,000 years ago, huh?
Collapse