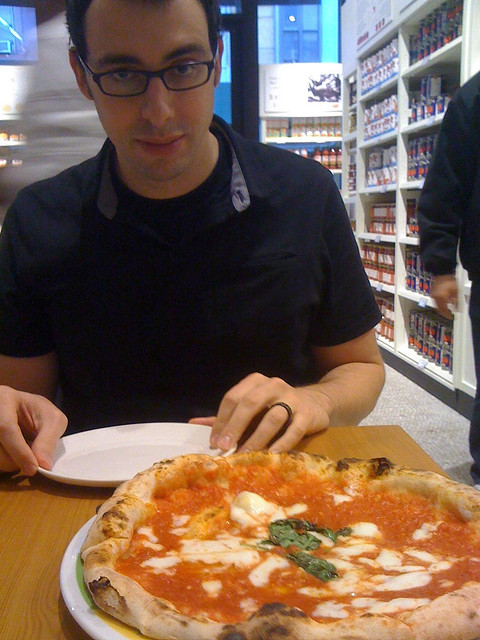 (M at Eataly with a very late pizza, photo by

A surprisingly busy last couple of days. On Friday after work Matt & I went to his apartment, met up with Katy & then Brian & Jocelyn & had a Pizza & Nintendo Party for Brian's son Henry, who I've hung out with before. Jenny came too! & eventually Kat. That was a nice little soiree, just goofing around & playing video games. The day before I had been trying to convince Henry of the justice in the Empire's cause. The Rebels are a fringe group of terrorists fighting against the legal government, Henry! We put on Super Mario Brothers 3 & Henry build a Lego set, which I thought was an AT-PT until I realized that the Republic craft probably has different nomenclature, you know? According to Wookieepedia, the "Clone Scout Walker" Lego set is actually a mis-named AT-RT. How about them apples? Of course, in the middle of all this, Katy brought out sliced apples & a huge bowl of caramel. Really very crazy. Hostess powers in full effect. We got up to World 9 on Mario 3 but you know, those tanks are meatgrinders, & it was Henry's bathtime, so off we went. Here is the take away from that evening-- I can't bowdlerize my speech very well. I was cursing up a storm! Left & right. I've got a foul mouth, I guess. At least by little kid standards. It is funny, because I say "curses," & "drat," & "gosh," all the time, but I guess the minced oaths haven't pushed out the regular oaths.

Saturday started with me eating a big breakfast-- sausage, egg & asiago cheese on a everything wheat bagel as well as a egg & corned beef hash wrap. I don't know, I was hungry. Jenny & I watched 30 Rock which was darn funny, but not as funny as Community this week-- that Abed-is-Jesus shtick was self-deprecating enough, self-aware enough, to really be just swell. Then Jenny & I met it with the very pregnant Kira to help her & Nino move furniture. They have to make their old apartment seemed "lived in" so it can be more easily sold. Grabbed a U-Haul & went down to Bayridge to pick some stuff up from Robert & Judy's, then back to the Slope-adjacent Heights for some of their stuff, then finally over to their old place. My arm was bugging me-- I told Nino I was going to keep it secret, to retain some pride, but there you have it. The move was a lot of back & forth & so sort of constant work. In the old apartment we did some cleaning & repairs & I got to prove myself handy by drilling out all the plastic grommets in the walls. I had a faint muscle memory from when I was sixty-five million & sixteen years old, & I searched my spinal cord & found it. Afterward we ate Pizza Plus, which Jenny & I haven't had in a year...after eating it basically non-stop for a year. Then, we were done. All spackled, all swept, the drapes all hung over the windows with care, visions of sugarplums dancing in our head. 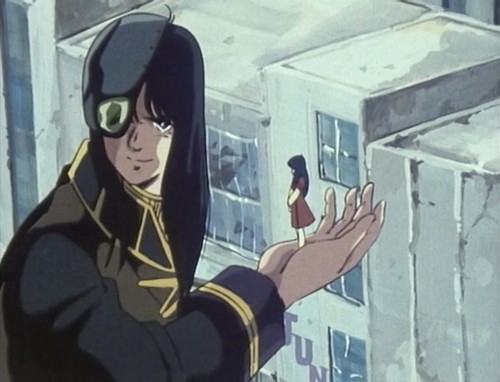 Which meant that it was truly time for rock & roll. Emphasis on rock, as in Rock, as in Rockman. As in, time for a Protomen show! The Protomen are on the very last leg of touring season; after these last couple of shows they are going back into the studio, which is exciting news. I say again: I want the follow up album to be called "Ø" & for it to be a Godspeed You Black Emperor!-esque ambient opera about Zero. On October Twenty-third, however, the Protomen came to Brooklyn to melt everyone's faces off.

toughlad & I tried to coordinate by text message-- "lets meet there at eleven!" "No, lets meet at eight!" "What about somewhere else at ten?" "Lets see the opening bands?" "Mission Dolores at nine?"-- & finally James was able to negotiate the rest of the Underfolk into meeting at the venue at eight-thirty. The venue was The Littlefield, which I was actually really impressed by. For one thing, & most obviously, I can walk to it, so that is a nice perk. For another, it is really well laid out? A bouncer who is separate from the ticketing seemed to keep things moving, right off the bat. There are two parts of Littlefield; the bar & the stage, & they blend together really well, even though it almost doesn't seem like it should. The separate bar area up front had the merch tables & sound piped in-- then there is a snaking winding hallway painted with spooky faces which leads to where the bands play. The crowd didn't quite fill it to capacity but we tried. There is an outdoor smoking area accessible from both the bar & the connecting hallway, & a pretty decent number of unisex bathrooms. There was some flooding while I was there, but that is a temporary inconvenience, not a flaw with the design. The beer selection was decent-- I was drinking Keegan Ale's "Mother's Milk Stout." I really liked the layout of the joint, I'd go back there again in a heartbeat.

Since I got there first, natch, I struck up a conversation with a guy I see at all the shows. Donnie. We'd talked before, waiting in the rain outside of the Webster Hall show. Also, there was someone in a Karkat shirt, which was awesome. Eventually James & Will & Jon & eventually Edbury all showed up. I bought a black "With These Hands We Will Destroy" rubber bracelet & James bought a white "With These Hands We Will Rebuild" one. Sweet. Also James bought a drink for a guy he thought was Turbolover but was just a guy cosplaying as him. Which is hilarious & great. We skipped the openers "Hellbear," as their sort of thrashy jams filtering through the PA were not really moving us. On the flip side of that, The Woes were the other opening act, & it turns out throaty folk turns out to be a great chaser for robotic rock opera. Also, you know, bands with lap steel & accordions & ukuleles & tubas & chaos. Then at last, ladies & gentlemen, The Protomen. It followed the rhythm of a couple of their other shows-- starting with Act II stuff then moving into the stuff from the first album. That is a really good build for them, I think-- Act II is technically superior, so starting with that & getting to the self-titled album's stuff when the crowd is in a frenzy is effective. I still say that the Santo's show had my favorite entrance, as they walked on to the clacking train tracks of "How The World Fell Under Darkness" as the lights strobed like a passing iron horse. This show was a lot of fun, & the crowd was back to being mixed-- it was predominantly male at The Knitting Factory but back to being a more even distribution. Hey, I care about gender statistics in geekdom. One of the songs they played in the encore was "Unrest in the House of Light" which is easily my favorite song on their eponymous album. The band was really present with the audience, too-- I gave Murphy Weller a piggy back ride all over the mosh pit, bungled a handshake with Turbo Lover & bumped chests, high fived K.i.l.r.o.y., Nightwalker was selling the merchandise, you know. All the rubbing elbows that smaller bands do with the fans. A sense of robot-fighting community.
Collapse