Koko Be Good by Jen Wang.

The black blot of planes
cris-crossing the sky...look out!
Peachy's Puff's Candy Girls!

This is another of the Flight alumni, like Ben Hatke. I'm really glad that Flight was such a successful showcase, letting authors make the leap to longer works. I found Koko... pretty compelling, in part because of what I didn't want to happen! I had very firm ideas on what endings I would find unacceptable. The premise of this book is pretty simple-- it follows the intersecting lives of a coming of age twenty-something who is just starting to get his act together & is on the cusp of moving to Peru to be with his long distance girlfriend, a "free-spirited" girl who takes advantage of others in her blundering quest for fun who decides to try to be "good & a high-school physical prodigy living with his older sister & strict parents stuck in the funk of adolescence. It would have been easy for this book to make me angry, but it never did. Good luck growing up; it is hard & stupid but if you do it right it is awesome. There were a few panels that I had a hard time following, but then a) maybe if I was more well-versed in indie comics I would have the "language" of their panel motion down better & b) hey, even the most super-heroic Bendis comic has panels that confuse me, sometimes. The water-coloury look of the book drew me in; the bleed is actually really great. Mostly...mostly I spent a lot of time looking at character's noses. You know what? I kind of want to give this book to Alex. She's like a non-disastrous Koko, maybe. Like the Koko Done Good. 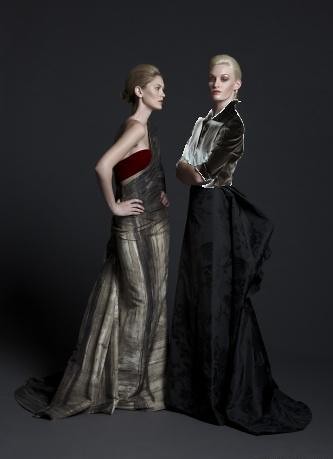 (Chelsey as Carolina Herrera, by Francesco Carrozzini. MSPaint by me.)

Everyone ended up canceling on Television Night yesterday-- or I should say all the second tier people! Mordicai & Jenny, the Original! Or so I claimed anyhow. I snuck out to the gym first; I had only done forty-five minutes the day before, so I did another forty-five yesterday. Heck, maybe I will again today. I, uh, hurt my shoulder again. I actually know how though; it was doing...this thing. I could show you with my arms, but I don't know what it is called. Shoulder abduction, that is it. Anyhow, I was overly gung-ho on Sunday while hanging out at home, & did exactly what I was trying not to do-- strain it when I should have been letting it finish healing. You know, it felt healed! Like how people take medication, then stop taking it because they feel better? Same thing. My shoulder felt better because I wasn't stressing it. I should have been more patient. Lesson learned. Don't tell anybody, I am kind of embarrassed. Anyhow, we watched an episode of Nikita while eating hot wings. My impressions from the first episode were fairly spot on, I think. Maggie Q is good in it-- she has what they call "a quiet reserve," plus her body is crazy. She's the right kind of attractive-- her body is weird, so looking at it isn't just prurient. The girl who plays Alex is acceptable, but everyone else on that show is rotten. The romantic foil isn't the worst, but he sure isn't good, & he sure isn't a Paul Ballard. I can't help but compare it to Dollhouse-- I think Nikita is what Fox thought they were getting with Dollhouse. Anyhow, the hacker on Nikita isn't even worth comparing to Topher, the "boss" isn't near DeWitt's (or Olivia Williams) league, & there isn't any analog to Enver Gjokaj. Oh man, Enver Gjokaj, remember how awesome he is? The writing on Nikiti is middle brow & predictable, & without good writing & a good cast, it will languish in mediocrity. Maggie Q comes out okay, though, so it isn't a total wash. Wait, Maggie Q was discovered by Jackie Chan? Yeah, she's a-okay be me. As for America's Next Top Model-- well, I agree with the judges! The right girl won, the right girls were in the bottom two, the right girl went home. I don't know anything about Carolina Herrera, but Chelsey's photo was my personal favorite, but Liz as John Galliano was magically spot on-- though her "oh, I am busy at home, I don't look at fashion" was an unforgivable snub. I'm over her, as a rule, but she was so perfect this shoot? Same with Kayla as Vivienne Westwood-- amazing. Lots of credit goes to casting & hair & make-up. Chris as Betsey Johnson was also really great, as was Ann's Alexander Wang. Esther & Jane had it hard as Christophe DeCarnin & Marc Jacobs; I wouldn't know how to be those guys either. Kendal too-- what does Vera Wang do? Stand with crossed arms? Francesco Carrozzini was the photographer, & I bet he does very well with the ladies (or the gents, if he prefers). Seriously, "oh, I'm a young & attractive fashion photographer" plus being charming? He seemed fun & was able to draw everyone out of their shell. Oh, then today, amongst my work scurrying, I had lunch with Tracey in the park.
Collapse