Down the black canal,
cutting through the red desert,
I came, sword in hand.

I read this in the Return to Mars collection; it has been two years since I've read one of the Barsoomian tales, & I have been getting the shakes. The trembles. Mars needs Mordicai! & vice versa. The first three books do form a loose trilogy, in that this fourth one ceases to follow John Carter but moves to his son, Carthoris-- & the next one is about his daughter, Tara (I peeked) & I guess the one after that is about some stranger, someone else entirely. I don't have a wealth of insights to bestow here; I've talked before about race & gender in Burroughs. In short, I think people sell Burrough's short when they lump him in with the casual racism of the times-- his Martian novels actually have a message of racial harmony-- the red men of the Martian canals, the yellow men of the poles, the white therns of the false religion, the black men of the planetary interior...they all get together. There is something to be said for the green men of Mars being "savages," & that falling into the cowboy cliches about Native Americans, & okay. You've got a point there, but I will counter with the fact that Tars Tarkas, the epitome of the green Barsoomians, is John Carter's main dude. Yes, that falls into the "sidekick" territory, & I hear you, but I'm saying if you cut Edgar Rice Burroughs some slack for historical context, I think the books are actually pretty good on the subject of race. Also, the green martians are my favorite of Burrough's creations; the picture of them in my head it really compelling. The ladies...well, there isn't much to defend there. Men are the protagonists, women are...well, they are characters, but they wouldn't past the Bechdel test. At least they aren't fainting, wilting flowers-- while Carthoris flies the sky vessel, Thuvia fires the guns. There is an element of agency, here-- though again, subordinant to the (non-white!) male protagonist. I'm hoping the next book, focusing as it does on Tara, breaks that mold. It might, even; these are pulp masterpieces, & they are capable of surprising you. Burroughs goes off on a tangent in Thuvia, Maid of Mars for a bit about philosophy & the nature of reality, so anything is possible, really. There is a reason these are legendary benchmarks for planetary romance; the Barsoom series is amazing, & this is a good example of it. 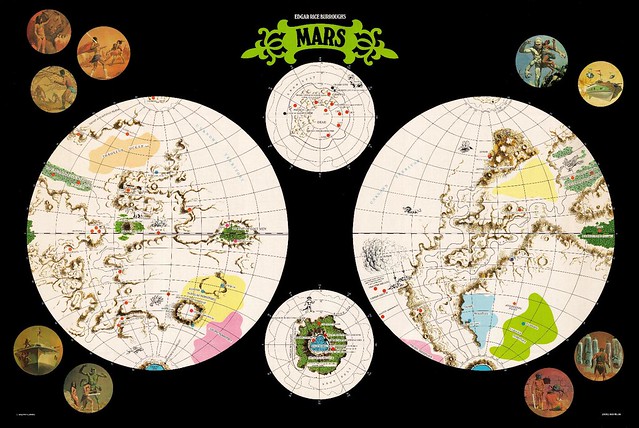 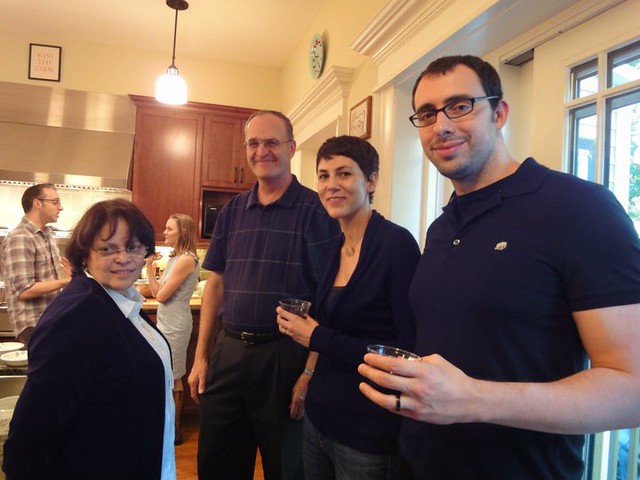 (With Candace's parents-- with Jodi & Nino in the background-- at Kira' baby shower.)

Had a nice lunch with Marie today & then went with her to try on clothes at the Gap. She tried on, that is. I can't really go close shopping with Jenny-- my own brain rebels against me & suddenly I'm shopping with my mother & the only solution is more petulance. No, shopping with Jenny doesn't really work, but shopping with Marie was okay. I like having opinions! Anyhow, before we tried to navigate the Cape of Denim we got noodles at Spice. Otherwise, I haven't been doing anything-- which is just the way I like it. Yesterday came home, was reminded by Jenny that I hadn't picked up the CSA, ran over there, came home, then out to the gym. Then we watched some television-- which, a word on. Jenny & I are very pause-happy. We engage a lot during television. It is "our time" together, & we aren't vegetables. I realized that this was worth noticing, talking to Kira & Nino, since I guess that isn't how other people do it? We are what Jenny called "aggressive television watchers." We watched Castle, which was another strong episode. Plus, Alexis! That show isn't amazing, it isn't breaking any boundaries, but it is really well crafted. A good example of fun television-- & I think Stana Katic is maybe a huge spaz? Which is endearing. Afterward we watched How I Met Your Mother, which had Jenny in stitches. She just giggled & giggled until I declared she was a Jigga-Gug, to which she solemnly replied "I am a Jigga-Gug." Still, HIMYM, points off for the casual slur "tranny." Really? Come on.

Monday Jenny had a big meeting at work, so even though she claimed she wasn't stressed, I insisted that is was a night for us to hang out. She made hamburgers on the grill & then we watched Glee. You know what? Brittany is really gaining on Kurt. The Victor Victoria number saved him in first place, but Heather Morris has been gaining & as they add depths to her character without over playing her I'm really getting into her. We also watched an episode of Rob Dyrdek's Fantasy Factory, with Laird Hamilton on it. I'm not necessarily opposed to explorations of masculinity. Especially since they looked like they were having fun. That is the thing about Rob Dyrdek, though-- he always looks like he's having fun. Actually-- we watched two episodes, we watched the one where him & Drama go "undercover" in an old folk's home. Like I said; lazy! It was a nice time. The day before Jenny had been getting over being sick, so we stuck around the apartment-- I might have done something vaguely useful, but I can't remember what. That night we went to Kira & Nino's & ate meatballs. That about sums it up; really nothing to report except for business as usual. I am the master of the lunch date, I am the master of the shut-in evening, I go to bed at like ten o' clock & I wake up at six-thirty, that is how I do. I make a pot off espresso & I fool around on the computer & then I come to work & do office stuff like a maniac. They ain't bad habits.
Collapse