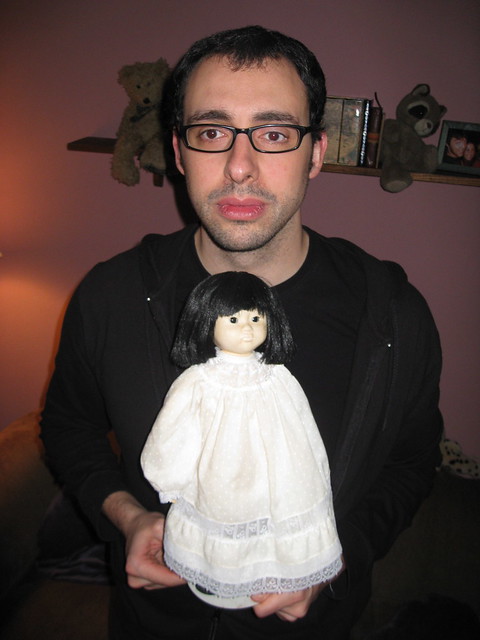 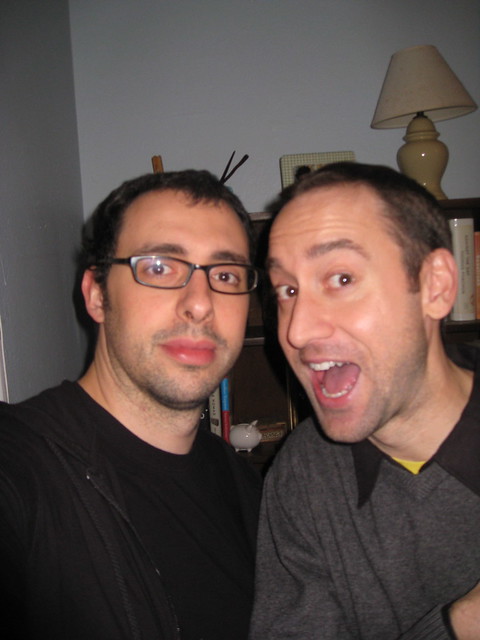 (Mordicai, by Jordan; Mordicai & Brian by me.) 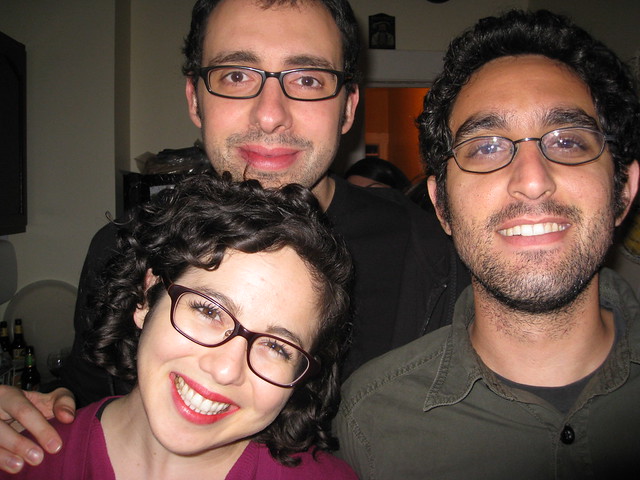 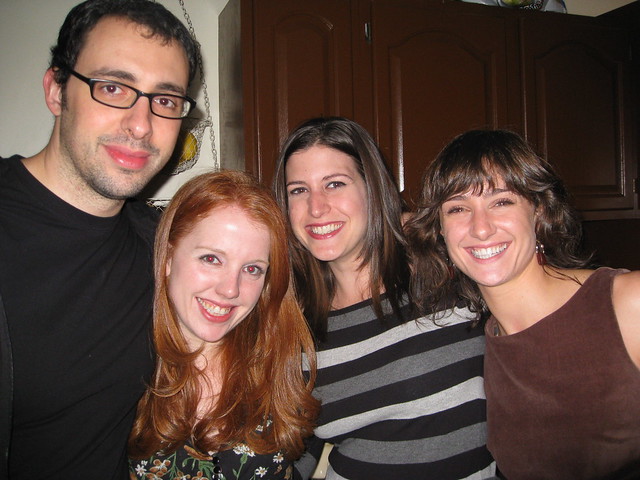 I've got to tell you, these hard ionized pans are great. Every time I think cleaning up dishes is going to be a pain in the neck, I remember. Seriously, they might seem a tad expensive, but they are totally worth it. Anyhow, now that I've finished straightening up after breakfast-- Jenny made steel cut oats with a hull cherry sauce, then put eggs over easy on top-- I might as well catch up on yesterday. My daytime activities were fairly laid back, by design, but I did snap at Jenny about it. She wanted to hang out with me & I wanted to be left alone. My usual weekend plans integrate being lazy with getting stuff done, but Jenny wanted that laziness to include her-- which wasn't really a problem, except that "fooling around on the internet" is part of my regimen. It worked out-- I used her wanting to hang out as motivation to go to the gym. I had a nice little dilettante workout; since I didn't want to over exert myself I just did fewer sets but on more machines. It means I didn't "push" myself on anything, but I just a decent once over, at least. If I can summon up an ounce of determination, I might do the same thing today. When I was finished I came home & Jenny & I watched The Mist. I've heard some people say it was decent, but I disagree. I think the first thirty minutes are good, I'll give you that. The basic level of suspense is built up. I thought the fire-brand crazy lady was distressingly believable. I think Thomas Jane looks like Henry Rollins. & I think the ending of the movie was just awful.

Spoilers. So he euthanizes his son & the rest of his tribe? Why would...what? Okay, I accepted that the old lady would commit suicide-- one person doing it I accept-- but that was your over-all plan? Just because you ran out of gas? Guy, you are on the highway, there is plenty of gas all around you in those abandoned cars. & the monsters? Are no more dangerous than an animal. I mean-- worst case scenario, the gate to the other dimension never closes & the monsters are everywhere & civilization collapses. Okay, so what? Congratulations, you are a savanna dwelling biped with a big brain & opposable thumbs. Welcome to the food chain. Considering that only one of the dozen of deaths caused by the monsters was particularly slow, I don't see how getting shot in the head is better. Anyhow, you will probably be fine; think of it this way. If 20 million tigers suddenly materialized in North America, there would be chaos. Everything would shut down, but for how long? Bullets kill tigers, & machine guns exist. Same thing with these creatures. Fighter jets exist, tanks exist! Heck, the monsters were largely stymied by huge plate glass windows. You'll be fine. & what, it was like four days? I don't buy their defeat, their depression. Get out & walk! Dude, don't shoot me in the face to prevent me from getting killed, that doesn't even make sense. Then of course, roll the cavalry-- depressingly cliche. Not a fan. End spoilers.

After the movie, it was nearly time to roll out for Matt & Katy's housewarming party...but first, Jenny & I had to eat a bunch of Chinese food! Which we commenced upon with great relish. My fortune cookie...didn't make sense. I can't remember it, but it was nonsense. Then I trundled onto the train & headed to Hell's Kitchen. Immediately, disaster struck-- the book I'd brought to read was terrible. I knew it was terrible, actually-- I'd started it & put it down once already, but I'd only gone a page in, & I thought maybe it got better. Well, no. I read about 70 pages of it there & back again, & it doesn't. If anything, it actually got worse. Still, getting to Matt & Katy's isn't bad at all, since you can take the express train there-- other than the fact that you have to snake in-between swarms of tourists when you exit the subway. I am not a tourist detractor-- of course you want to visit Metropolis, very understandable-- but you know, there are a bunch of them & they don't know how to walk. Then, a party! Matt & Katy have far flung & disparate cliques-- people from New England came down, work friends, family friends, friends from each of their colleges, all kinds of groups. Our clique-- me, Jocelyn, Brian, Kat, Jordan, J. Matthew, Amy, Omry, Katie, Sara, Autumn & Chris (presented roughly in order of arrival)-- branched out a few times, brought in some other people, who were actually pretty alright. Not that I remember anyone's name, because I'm terrible at that. "Somebody from the Couch" & the girl in the kitchen we talked to about getting engaged, those were the notable buddies. I left at a little after eleven; I was going to leave with Amy & Omry, but they changed their mind, & then I was going to leave with Kat & Alvin but then she changed her mind! Not that I cared-- I'm no wet blanket-- but that is how it went down. Mostly I wanted company because I didn't want to read that awful book. Oh, & I should mention; there are other pictures up at my flickr.

I didn't duck out in secret, but it might have seemed that way; when I left the party was filled to capacity, & I wasn't going to struggle like a salmon going upstream just to say all the goodbyes I should have been obligated to say. I came home & Jenny was still awake, & feeling better-- enough that I didn't need to sleep in Spare Oom. In the morning, & so far today, it seems like she's doing better, other than her congestion. We watched an old episode of How I Met Your Mother that was pretty okay; not groan inducing like some of their recent ones, but-- well, the shows formula is getting a bit threadbare. I again reiterate that they missed the boat not having Robin & Barney become a couple; going back to status quo is what is killing the show. I also watched the first part of Batman: The Brave & the Bold before my DVR choked on it. I only got to see the intro, but it was a doozy. Haunted Tank! If you don't know about Haunted Tank, it is pretty understandable, since it is crazy. It is an M3 WWII tank that is haunted by the ghost of a Confederate general, sent by the ghost of Alexander the Great. In Brave & the Bold it did the cliche "draw bridge jump," but when it was in the air...the slow-mo kicked in & the bar of "Dixie" from The Duke of Hazard's General Lee played. Now we've moved on to thinking about lunch...I guess I'll go buy us some pizza? We have plans for dinner, so I don't know if I will be kicking into gear; I'll probably flake on the gym today & go tomorrow. See? No sweat. Plans in action. Bass in full effect. Oh, hey! Jenny just put on Rob Dyrdek's Fantasy Factory-- I find him charming.
Collapse