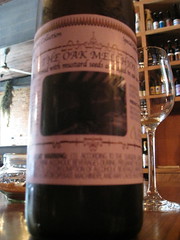 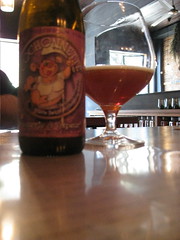 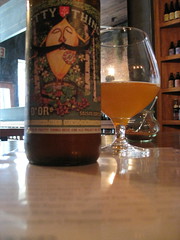 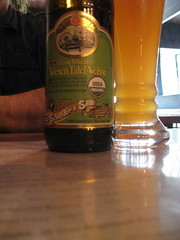 Lets get into the DeLorean & go back, wayback, all the way to Sunday. Beer Table time!

onatopofthings & I went for our Sunday brunch, while Jenny stayed home. We started out with food, first thing; I had the baked eggs & toast along with the yogurt. First round for me was Picobrouwerij Alvinne Oak Melchior which is made with loads of mustard seeds! It tastes like apples, mustard, & the oak from the barrels. I thought so, anyway. Ryan ordered the Vapeur Cochonnette, which was a good "weird" beer, like I enjoy-- coriander is usually a good sign. It was super fizzy, & apparently the brewery that makes it is one of the last steam powered breweries left. The next round was Pretty Things Jack D'Or, at Ryan's behest-- it was a fairly sizable bottle, so we split it. I liked it, but didn't take any particular notes of individual flavors; Beer Table says it is "fresh bread, apple skin, ginger, lacy texture." Actually, the texture note is pretty spot on; it was frilly, in its way. I ordered Goose Island Bourbon County Stout, which wasn't on the menu, but I saw it on the wall & convinced the server to sell it to me. He had to chill it in a bucket, so that went on while we drink the Jack D'Or. I'd had the Bourbon County Stout before, but I really like it, & figured Ryan would too. Ryan for his part ordered Scheider Weisen Edel-Weiss, which was light & tasted like citrus & bananas. Then we came back to my apartment, where Jenny was holding court with Carla. Ryan & I played some Super Mario Bros 3 & then went in to hang out with the girls. I fed them lots of wine & let everyone else complain about work. When everyone left, Jenny & I watched the Glee "Grilled Cheesus" episode, which was cute enough. Lots of Kurt, but also lots of preachy stuff. Glee is such a mixed bag-- Jenny sent me some article with a title along the lines of "Glee would be the best show on television if it wasn't also the worst show on television."

Monday was a tricky wicket! I had over-booked myself. Confusingly! Both legitimate confusion along with mistakes, broken communication, a host of minor bedevilments. I didn't realize I didn't have the day off work, I didn't realize I was supposed to have the day off work, I didn't realize other people assumed I had the day off work, it was just a mess. Stupid Cristoforo Colombo; at least I take some solace in the fact that some of his contemporaries were aware of the scope of his atrocities. Anyhow, I had booked both my morning & my evening, only to find out that I had to cover for a co-worker, as well. Doom! I ended up having to cancel my plans & leave work early in order to juggle everything. Lo & behold, it worked out fine; I helped Kira & Nino take out their air conditioners & picked up a new mattress from them, then drove it home. New bed! The mattress is about twice as thick as our old one. Jenny & I ate some burgers for dinner & watched Nikita, which isn't good & isn't bad...but it does give me a new appreciation for how good the cast of Dollhouse was. When I put the old mattress out, it started to rain, & Jenny said "aw, poor mattress." Then the rain really started pouring. Next, the rousing drums, the thunder-- the donder after the blitzen, bright jagged purple streaks. The wind was wailing so hard, we had to shut the windows...which is when the hail started to fall. I'm not talking little dots; these were huge pieces the size of dimes. The street was a river covered in slush, the sidewalks were as white as winter. It was crazy; I was glad I wasn't stuck out in it like I was stuck in the tornado.

Bring Down the Sun by Judith Tarr.

The Mystery Rites:
Girdle & Ring, Bull & Queen.
Into the Labyrinth!

I picked this up because of the cover; it really is gorgeous & it stirred something deep in the recesses of my memory. Did the artist, Rick Berry, do roleplaying game art? Did he do...Earthdawn art? He did! He even did that picture of Aina & Ysrthgrathe! Hey, I like that a lot! I looked a little closer & saw that this was a novel about the mother of Alexander the Great. What I know about the mother of Alexander the Great can be summed up pretty easily: she was played by Angelina Jolie in that one movie, right? Sorry, I'm more a Cleitus the Black fan. Anyhow, I decided to dig in, & I was pleasantly surprised. First-- I admit that I am often troubled by portrayals of matriarchy in historical fiction. I'm sorry, there just isn't any evidence to support it. Don't get me wrong; I'm not saying this as an indictment of feminism-- rather to say that feminism's gains are through hard work & modern efforts toward equality. There wasn't a magical age of egalitarianism & Mother Goddess worship Oh, sure, the field of archeology has been littered with the detritus of misogynistic scholarship, but still: until you can show me some actual evidence-- Marija Gimbutas' spirals & eyes & female figures are suspect, sad to say. Neither here nor there, just a topic of discussion that the book brought up!

Not knowing anything about Olympias, I had no way of knowing if the book was being relatively faithful or being very liberal with the facts. Magic certainly exists, but that is part of the fun of historical fiction, isn't it? That doesn't detract from the story-- it isn't truth or accuracy but rather something more intangible. History is a narrative; anyone who pretends to know the truth of it is silly. It turns out, Judith Tarr cleaved to the historical sources pretty closely. The book is divided into three parts, one for each name she had in life-- Polyxena as a girl, Myrtale when she marries Phillip, & finally Olympias (well, ultimately Stratonice, but the book ends with Alexander's birth, when she becomes Olympias). The most effective passages of the story was the romance & the aforementioned supernatural elements. I'm not a fan of the "man versus woman" story-- the gender war is my least favorite form of genderpolitik-- but Tarr does it well, & once it moves into the bedroom it becomes compelling & believable. Similarly, the use of iconography, illusion & perception all play together with the fluidity of the magical passages-- the magic is vibrant, no matter of staid spells or flashy lightning bolts. Also, tons of witches from Thessaly, which Tarr paints in a picture connecting them to the pagan myths of the Inquisition-- it is a bridge that sings, I think. I found it one of the most memorable conceits in the book.
Collapse