onatopofthings & I went to go see The Two Towers at Radio City Music Hall, where the show the film & a full orchestra provides the soundtrack. I head about this two late to see The Fellowship of the Ring-- which I think we all agree is the best of the trilogy, & is one of my top five favorite films ever-- but I was super excited to see The Two Towers. & hey, it looks like they might do Fellowship of the Ring again next season? & definitely Return of the King in 2011. I've never been to Radio City Music Hall before, so I got that checked off on my "Gotham Landmark" list. I had a very lazy Saturday preceding the performance-- I had opted not to go to Comic Con this year, since I've had a miserable time the last three years I've gone. Of course, this year a bunch of webcomic artists that I'd like to say hi to went, & there were RPG games going on, & decent panels, & better swag, & they rented more space...basically, this year it sounds like they got their act together. Oh well! I thought about going on the Professional Only day, & maybe should have. Instead I failed to get together with Amy & Omry-- our schedules just wouldn't line up-- & hoped to get a chance to hang out with

fordmadoxfraud but that didn't materialize, either. I elected not to go to the gym due to my bum shoulder-- I think I actually strained it when I was fooling around with some eight pound weights, which is just embarrassing. Yep, lazy weekend day in the extreme; I ate a sandwich from Brooklyn Bread, watched an episode of Mythbusters, goofed around, & made a salad with dandelion greens, romaine lettuce, beet greens, hull cherries, cheese, balsamic vinaigrette & used some dry Stouffer's stuffing for croutons. A Frankenstein's creation of roughage.

On the way up to Radio City Music Hall I ran into Kira & Nino, which led to me figuring out that Monday was still a work day, & that I had to cover some numbers for Kelly on Monday, & that I had to help move furniture & get a new mattress & that I'd scheduled my Oubliette game for that day, too-- I'd over committed! I had to text my players & cancel; I just didn't have any wiggle room. Nino tried to tell me to go to a bonecracker for my shoulder! If it becomes a thing, I might consider, but I think I just need to let it heal-- it ain't that bad. Then to the show! Radio City Music Hall is kind of neat, in its way. Ryan & I got our seats, which were pretty tiny, & then switched off on going to the restrooms-- there was a huge line to get into the "ladies sufficiency," & even a small one for the "gentleman's lounge." I was a fan of a lot of the people there-- the cute & attractive couple with elf ears in front of us, the nerdier couple next to us, the girl with the Tolkien tattoo on her back. It was the West-gate from Moria, & I wanted to ask her if she'd considered getting Hadhodrond in place of Moria in the ithildin inscription, but thought it might be considered rude. Anyhow, if you come to the orchestra performance of the Lord of the Rings score, chances are we have some overlapping interests, so I was well inclined towards the crowd-- especially all the people dressed up nicely for their dates. Great date, you guys, very romantic.

The people who sat to the left of me...they were pretty awfully, actually. First strike, they came in late, after the concert & film had begun. Second strike, they kept taking photographs & checking their smartphones. I was tolerant for a bit; the concert is neat, I understand wanting to capture the moment. Then they started taking massive numbers of photos, their cameras beeping & blooping & making the shutter sound over & over. So I asked them to mute it, which made them stop. Then in the eleventh hour they swooped in with strikes three & four. They took a flash photo! That is beyond the pale-- I was going to yell at them, but then they left when the movie ended! A lot of people did, actually, which struck me as both inexcusably rude & incredibly stupid. You know that you came for the orchestra, right? Heck, during the credits the soloist sang Emilíana Torrini's "Gollum's Song" & the concert still kept going-- isn't that what you paid for? Not to mention, leaving before the clapping? What is the matter, didn't you enjoy the show? An astonishing lack of civics-- nothing is worse than self-destructive stupidity, for one-- at least gain something when you are selfish, people! & opting out of participation? Society is a dialogue, people; reckless consumers are the worst. I was also annoyed with-- but not mad at-- the wild clapping from the audience. I know, I get it, I am excited to see Gandalf too! We don't need to clap though; this isn't a stage performance, it is a concert! You are clapping over the music. Like I said, I'm not angry about it; excitement isn't a social ill! I just wanted to be like "I'm glad you are enjoying yourself, but the leitmotif is complicated, lets hear them nail it!"

Luckily, the people next to me were not annoying enough to taint the show, which was wonderful! Like I said-- over-all, I had a warm feeling of tribal kinship with the people there. We're all in this together, nerds! I don't know enough about orchestras to really give intelligent feedback. Shore's score is very strong, musically, & you can see how it holds together in different contexts. Maestro Wicki conducted & I wish I could say anything about it-- I watched him? I find the wand work of conducted somewhat mesmerizing, but lack the ability to make further comment. Kaitlyn Lusk as the soloist was great; she had to cover a huge range of style, including Enya. The 21st Century Symphony Orchestra has made a thing of performing scores, which is a fun niche; I can see it being gratifying, since music in movies is often viscerally accessible to audiences that otherwise don't experience a lot of classical music, like me! Brooklyn Youth Chorus & the Dessoff Symphonic Choir both were highlights; I think the switch from strings to brass to choral is the real money shot of a musical score; it is a grandiose way of providing narrative movement. The movie had been remixed to keep the dialogue & most sound effects, & was shown with subtitles. Ryan said he thought it was weird to watch it without the extended scenes, but I think Return of the King is the film where the extended scenes must be shown; even though it is very long, the confrontation between Gandalf & the Witch-king is required, as is the resolution of Saruman's story. Ryan says the pacing of the film works better, too-- so even though it is longer, it doesn't seem as drawn out. I found that I watched the screen about two-thirds of the time, & watched the orchestra the other third. The concert was performed with an intermission, which was probably for the best, but I would have shot through it straight. I'm hardcore. 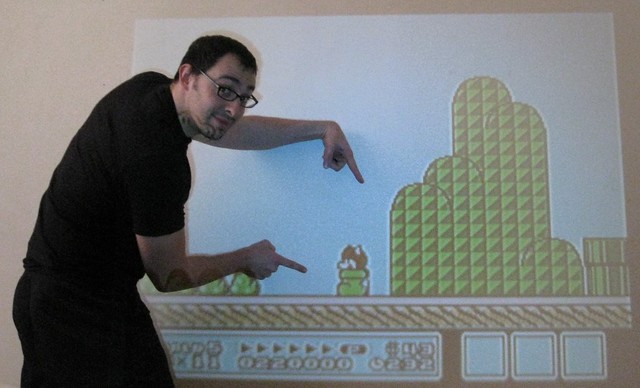