The bear showed its fangs;
porcupine held sticks for claws:
"Like this? Rat creatures!"

I don't have to talk up Bone, do I? I mean, everyone has read it & understands what a triumph of comics, cartooning & storytelling it is, right? I'm going to take that for granted. This volume is more of a nudge than a complete work-- a sort of poke in the shoulder, reminding you how great Bone is. If you've read Stupid, Stupid Rat Tails you've already read half of it-- which is a caveat worth being told up front. Half of this book is reprinted content, but since I haven't read it since I was killing time in the backseat of Cortney's car back in college, I didn't mind. The rest of the stories here are in the same vein-- two written & drawn by Jeff Smith, two written by Tom Sniegoski & drawn by Jeff Smith. I wish there was a Rose-type story, with writing by Smith & art by Charles Vess, but alas, no. The book, due to its episodic nature, winds up more "cute" than anything-- though I will say I coo'd & clucked over Bartleby, from his fangy smile to his solemn wide eyes. As usual, you don't see Boneville, which is a good thing-- can I tell you, I think Boneville is like New York. I think it is a bustling modern city, I always have. Phoney Bone makes a lot more sense if you think of him in that context. This is an endearing trip down memory lane; heck, it sure makes me remember just how great & epic in scope the main thrust of Bone was. 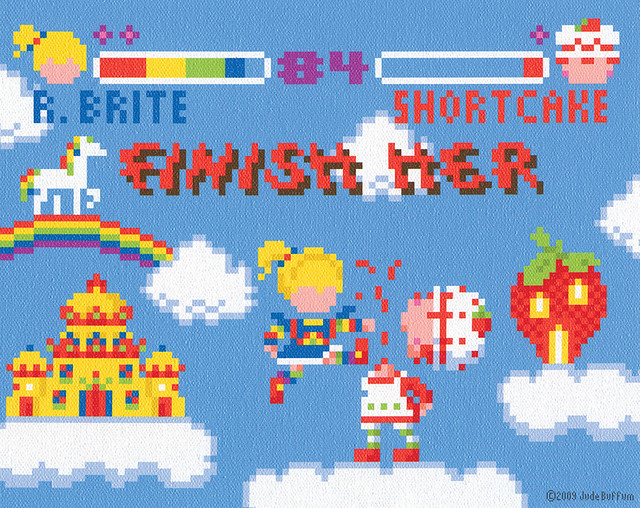 My arm is messed up somehow; I wrenched it doing-- who knows what? Over exertion or maybe just sleeping on it wrong. That is the funny think about being alive, a perfectly stupid reason is just as likely as a decent one, if not more so. Dumb old sack of meat. I went to the gym last night with this bent wing & was useless; even the oblique machine was putting strain on it. I ended up going forty-five minutes of cardio on the elliptical & fifteen minutes of machines, then packing it in. I'm thinking of going today, but I can't be sure that the cardiovascular machine didn't agitate it. It isn't a big deal, like, it isn't badly hurt, but it manages to be in such a way that it hampers my behavior a lot. I feel the twinge of pain whenever I do anything, & I keep it tucked close to my body the rest of the time like a hurt paw. It isn't bad, I stress that again, but I want it to go the eff away, & if skipping the gym helps that happen, then I should at least consider it. Boo, stupid sack of bones. When I came home Jenny had made the Stouffer's frozen macaroni & cheese that I'd bought for an emergency, which was weird since we'd been talking about it at work today. Baader-Meinhof, all the time, every day; a consequence of being a magician. I made some yogurt & granola & honey, with greek yogurt, which was weird. Then we settled in to read-- comic books on my part. Tall Tales, but then a few others that

fordmadoxfraud had stashed with me.

Taskmaster is a fun concept & a good comic; it vibes like Jason Aaron's Ghostrider, which is to say-- a super hero comic book. So many things have been trying to escape the genre that it is a relief to see the Renaissance happening. People like Mark Millar try to recapture Watchmen (& you could say that Watchmen was a commentary on The Fantastic Four...) while pretending like the 80s & 90s didn't happen. They did, guys, we're on to the "trick" of making comics hyperviolent & then claiming they are "realistic." Sorry to break it to you, but nope. Taskmaster is fun, & gives attention to a fan favorite who has been in the margins for a while. Plus, it ends with the best teaser: "NEXT ISSUE: A VILLAGE OF HITLERS?!!" Comics: remember when they were fun & crazy? Then we've got Avengers Prime, which I like. Focusing on Thor, Captain America Steve Rogers & Iron Man is a smart pitch, & even though they all sound very "Bendis" I don't mind. & I have always really liked Hela's costume. I do find it hard to believe that Tony Stark never took the time to learn Norse mythology. Dude is super smart, & buddies with Thor, you'd think he'd at least read the Wikipedia page. Chaos War seems a little dumb, but I am willing to give it a chance. I have mixed feelings. Amatsu-Mikaboshi is neat, & I like the use of non-Western sources, but I'm unconvinced of his "bad assery." Having someone mention Galactus really underscores the point that, well, as far as "super threats" go, there could be better than something created in 2006. Pedigree counts, & Amatsu-Mikaboshi isn't up to a Thanos level yet. Pak has really been nailing it with Prince of Power, Incredible Hercules & Planet Hulk but I can't help but remember that World War Hulk was...dumb. Speaking of dumb, I can't understand why David keeps buying Brightest Day. I liked The Sinestro Corps War & I am down with all the rainbow of Lanterns, but Blackest Night was pretty stupid, & this is both boring & stupid, & keeps upping the ante with "stuff I don't care about." Oh, negaverse death clones, yawn. Deathstorm is lame, & having the other characters in the comic realize it is lame doesn't really work- remember Superboy-Prime? The fight between Aquaman & Black Manta was kind of cool, though. Anyhow, this morning I also watched Batman: The Brave & the Bold while Jenny was getting ready for work. Starring The Doom Patrol! I liked the nods; Silky in the Killer Moth intro, Beast Boy in the signs at the carnival. The intro, well-- I remain a dedicated fan of Cassandra Cain. Okay, damaged ninja girl might not be the most original trope, but she was my damaged ninja girl. I admit I'm shocked that The Chief wasn't the mastermind behind the villains. Animal-Vegetable-Mineral Man! He is so great, as is calling Negative Man "Half Man, Half Mummy, All Radio!"
Collapse