Dark Sun Creature Catalog by Wizards of the Coast.

The lips aquire stains,
the stains become a warning.
It's by will alone!

I borrowed this from

fordmadoxfraud, as I'm a fan of Dark Sun...though so far only in theory. Like the Dark Sun campaigns of editions past, it seems really cool, everyone agrees it would be fun...but the game never materializes. Dark Sun is a mirage, a setting people talk about running & then never do. That doesn't mean parts of it don't wiggle in places-- somebody plays a Mul or Thri-Kreen or whatever, or something like this book comes out, full of monsters. If you need something messed up, just reach in here & pull something out. Need something desert themed? Or psionic themed? Want some creepy version of the traditional DnD races-- like cannibal halflings? Just looking for a taste of something new? Boom. This is the strength of any compendium of monsters, & always has been. You provide a laundry list & let the Dungeon Master choose a la carte. I think my favorite monster in the book is actually...the salt golem? No wait, my favorite monster in the book is definitely the crystal spider. I have a thing for spiders, I have a thing for glass & I especially have a thing for glass spiders. Remember that old BBD door, Barren Realms? I was clan Glass Spider & I steamrolled my enemies with technological superiority; fertile coast lands & mega-carryalls disgorging fleets of ornithopters, because that is how I roll. Hey, "Barren Realms," huh? Prefiguring this very moment, in the barren realm of Athas?

Least favorite monster is probably a toss-up between the drakes & the tarek. Drakes because...guys, they are just dragons. You can't not have dragons but then have fire breathing dinosaurs! Okay, I get what you are doing-- trying to "cheat," to have dragons without having Dragons. I get it, I just don't think it works. The tarek, blech. You said you wanted a setting without orcs but then...made orcs, but with a different name? Speaking of orcs, I realized recently that I consider orcs a "base fantasy race" now. Orc, elf, dwarf...I just include them in the bones of my internal "high fantasy" conceptualization. I think it is okay to make goblins as generic foes, because you can make them magical-- you can make them monsters, not people. Gnolls are beast-men. Orcs though...orcs are a "race," a type of fantasy people. Making them default monsters is a gross colonial attitude. Actually, I think "elf" & "orc" are two of the more robust fantasy races, because you can deal with them using the wide net of evolutionary psychology. Elves should be "what if humans lived for hundreds of years, how would they behave?" Orcs are a little fuzzier-- they coud be "what if humans only lived for a short while?" or "what if humans had litters of young?" but really? Really I think orcs are "what if Neanderthals were still around?"

martak is gonzo about the last quarter of this book, the "Personages of Athas" chapter that includes the Sorcerer-Kings. I know that these sorts of things are matters of some contention. Most gaming groups don't need multiple epic solo threats; the epic game is somewhat of a rarity, & they don't need constant "boss fights." You know what though? I certainly don't care. I haven't played a 4e campaign past 4th level, but I gobble these guys up. It is more than a matter of stat blocks, it is Dungeons & Dragons mythology! Things like the Archdukes of Hell or the Demon Princes or the Sorcerer-Kings reveal the fundamental underpinnings of the metaplot, & that is cool. In fact, I wish the book had diverged from the format of the stat block a little. I appreciate that Wizards of the Coast have veered away from descriptive text, allowing pictures to do the heavy lifting, but for the big ticket items, I'd like more discussion. I think Nibenay is my favorite of these guys-- I just like his name, & the image of the Dragon-King is iconic, right? Then the very last few pages are monster themes, which are fine, but also hazards & terrain features, which are cool-- every map should get spiced up with some hazards or terrain features! Maybe they are a legacy of miniature war gaming, but they are a cool one. 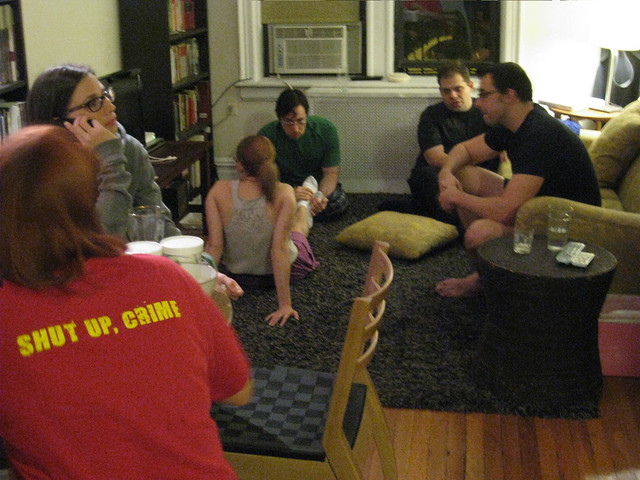 TV night! It was a huge confab, actually! I'm still shaking off the after effects. Let me start near the beginning;

ranai is in town! She came in yesterday & we got lunch at Republic, going halfsies on a plate of noodles & a bánh mì & a bowl of corn soup with tofu. I lugged her back up to the office, & then she met me after work to head to my apartment. On the train, the old guy! The recent old guy. He is a man who has been making small talk with me in the neighborhood for a few years; I just recently figured out where I know him from-- the gym. & now I know that he teaches fashion at Parsons. When we got home, Danielle & I played Super Mario Brothers 3 & split a piece of carrot cake in Spare Oom while we waited for Jenny to get home. Jenny was sad there wasn't any cake left & Danielle pinned the rap on me. Eventually people started trickling in; special guest

onatopofthings! Ryan & Danielle double feature! First though, while getting burritos from Rachel's, Dizzy & I bumped into

fatbutts. So back in, pick up Lilly's stuff, then back home & into PJs.

elladorian were, already! They weren't going to come on account of Maggie being under the weather, but for special guests she decided to be a trooper! Then next was Carla & her dog Claudio, then James & his & Lilly's dog, Archie. Archie is young & rambuncious, Claudio is old & shy. Claudio was hidden in Spare Oom with only me to come & visit him! I did it. America's Next Top Model was fine: moving runways are wonderful stupidity, as are luchadore photo shoots. Modern Family was also very funny, but yikes, I was drunk by then. Alcohol-- I don't drink it that often any more? Which is fine with me but I have forgotten the skills of moderation. All or nothing are not the only selections, Mordicai! Anyhow-- today I grabbed lunch with Ryan in the park; we ate Shake Shack, which he'd never had. I had one of their Octoberfest sausages, with pretzels on top-- also, a Shack Stack. Take a burger, yum, then take a portabella mushroom, fill it with cheese, deep fry it, then put that on top of the burger patty. Gulp. We bumped into

toughlad in that park, flush from a win at People's Court-- with his financial windfall, he was taking

skycornerless to a fancy lunch. I recommended he go to Tabla while the getting was good, since it is closing. Which brings us to now. I'm utterly unmotivated.
Collapse