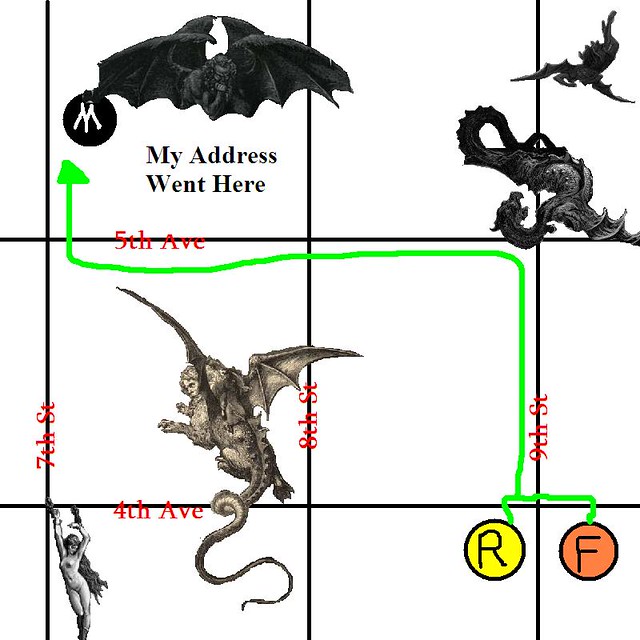 Last night Brian & Jocelyn & Kat came over to play DnD! Well, if only it were that easy. We were meant to meet up after work, but sudden prescriptions, after-work confidences, & the CSA all conspired to push that back to about seven. By the way, my CSA loot-load was lovely; apples, pears, onions, potatoes, tomatoes, hull cherries, tons of beets, dandelions, romaine, cilantro, squashes, peppers. It wasn't too tricky though; Jocelyn & Brian showed up forthwith, followed shortly by a slightly frazzled Kat. I whipped out the Player's Handbook & Player's Handbook 2 & we got cracking. I put on Godspeed You Black Emperor! & A Silver Mt. Zion, which was commented on for being good atmospherics. Going in, Kat knew more or less precisely what she wanted to play, right down to class & race; Jocelyn knew conceptually what she wanted to play, but still needed to hammer out the mechanics & specifics; Brian had no idea, really, & wanted to flip through the books for inspiration, which ended up serving him really well. In the end, Brian created Brace Dixon (the most Buck Rogers & Flash Gordon-y name I've ever heard; subject to change), a Deva Invoker who views Bahamut in a sort of feathered serpent Ur-Mayan fashion-- I think it appeals to Brian's interest in spirituality, mysticism & 2012-- he ended up creating the character he wanted to play, so I count it as a major win. Jocelyn wanted to play a shapeshifting thief, so I laid out a few options for her, & she chose to play Summer Hero, a Gnome Druid with the multiclass feat for Rogue. She expressed an interest in Sehanine, so she is affiliated with her, & when I quizzed her about what totem animal her character would have, Jocelyn decided on "Rodent." I think the sneaky nature of the Gnome race & the dash of Rogue-- along with Thievery as a trained skill-- well satiate her. Kat had decided right off that bat that she wanted to be an Eladrin Wizard, & even after she gave due diligence to other options like Warlock & Sorcerer, she came right back to her core, making Dia Luna Cadabra. Kat was the most decisive; after I read through the powers she could take, she jumped right on top of the ones she wanted. Kat I know is excited-- she's been reading about the history of Dungeons & Dragons & role-playing games on Wikipedia all week. 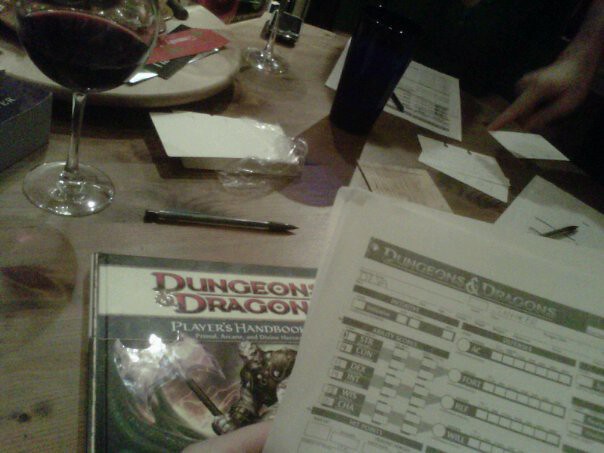 ("Wait. Wat." by Brian. After nagging Jenny to leave the camera, I took zero pictures. Zilch.)

I did end up a little disheartened & disaffected with the Fourth Edition, though-- it sure is hard to break some newbies into the mix. The character sheet is an enigma, the math is opaque, the powers are mostly described mechanically; jargon rather than in plain language. Creating characters for the three of them took about three hours, & it made me wish that I'd decided to start them with World of Darkness, where we could have filled in bubbles & been done with it. I elected to shoot for DnD so that they would have the "classic" experience-- so they'd be able to say "I played a Tiefling Warlock" & be able to share that experience with anyone whose played DnD before, rather than going off into the homebrew craziness Oubliette entails. I do take some comfort in the existance of the Red Box & the DnD Essentials line-- stuff for beginners shows that the folks at Wizards of the Coast realize the hurdles this edition has for new players. It also makes me realize the appeal of the Character Builder-- it would have made this whole process a lot easier, & my problems with it-- not being flexible enough to allow feat creation, class creation, race creation, magic item creation-- are relatively high-functioning problems. Too bad it doesn't run on a Mac, making the whole point moot. In the end, they chose their races, their classes, their powers, their skills, & their feats-- though I helped a lot with the feats. I think feats are a mess in this edition, so forget about trying to explain them to new players. Jocelyn took a multiclass feat, which is a good choice. Kat took "Jack of All Trades," which is another good choice, especially since she'd said she wanted "all the skillz." Brian took a feat that turns his Deva racial power from a d6 into a d8, which fits his character concept. Now all I have to do is sit down with Matt & Katy & build them some characters-- an Elf Ranger & who knows what else-- & we will be good to go. The party is hilariously all Controllers so far, so with Matt playing a Striker & sort of have my fingers crossed Katy will want to be a Leader or a Defender. If not though, that is cool; I've gone on the record numerous times saying I like mismatched parties, & especially ones without a Cleric.

Garden of Eden
bookends history, as does
the Rise of the Dead.

The post-apocalyptic story is the most human story. I mean human, that thing positioned between ape & alien, that piece of evolution where bipedalism & thumbs & a reasonably large brain & tool usage all come together. A pinpoint moment in time, after all the "well, how do we define language? How smart does australopithecine have to be to count as Homo?" & well before things like "well, does cyborg theory mean that we've already passed the threshold on being mechanical chimeras? Are we exponentially approaching the Singularity?" nonsense. To be human, where the questions of what it means to be human are moral & psychological, not ethical & existential & not anything crazier. Utopia is a place you might try to get to-- whether or not it is real, or--like the cake-- it is a lie. There is a spread between the advanced tools of humans-- cars & guns, for instance-- & the more primal stuff like axes & hammers. The cost is in blood, & death-- articulate & gut-level instincts. It is the story of the Ice Age, told again & again-- what if the human species was almost gone? Hanging on by a thread? Who would you be? What would you be? Zombie Armageddon is a particular brand of it, & popular. Zombies are a wonderful Other. They look human, but they incontrovertibly aren't. Anyone could become one. They define Human by their existence. Are you a zombie? If not, then you are one of Us. If you are one of Them the only choice is death. Kill or be killed. Like I said-- basic. Savannah Human. You have a weapon & a tribe & you have to fight to survive, to be the fittest.

I wonder about desensitization, & about taboos. Chopping people up is horrific, even if they are the undead. Maybe especially if they are. That being said, you can shake that off. Heck, I dissected a human corpse with a several other students. Prosected, actually. Whatever the difference is. I've pushed adiposed flesh through a sieve, & yeah-- I can tell you that you can get inured to things. Like sanitation workers, or the people who change the little blue cakes in urinals. I am guessing they think to themselves-- "hey, urine is actually fairly clean." They just turn on the part of their brain that says "actually, the place with all the scary bacteria you should be frightened of is the kitchen sink. That stuff is nasty." At least, that is how I'd do it-- which probably says something about my approach to stress, too. Desperate appeals to reason. The protagonist of this novel is something similar. I won't say she's a polymath of end times skills, but she sure ain't no slouch. In a short period of time she becomes proficient at ending the unlives of the damned, & doing the same to humans when those dark deeds need doing. Her evolution is above all believable, right down to her fairly rotten aim with a gun. Madeleine Roux manages to never make the post-zombie world comfortable, while making it plausible along the way. The characters don't forget that it is the end of the world, but the do cope with it.

Allison Hewitt is Trapped seems like an everything & the kitchen sink approach to storytelling at first blush. It is a zombie novel, check. It is told in blog form, check. She's trapped in a bookstore, check. Frame story, check. (I have to confess-- the very last two pages, the back end of the frame, really charmed me.) Enough hooks there to make a coat-rack, but don't be fooled-- it gels together, & ends up being a fairly innovative zombie story. Sure, one woman's journey, yadda yadda, internal conflict juxtaposed against external threats, whatever. What sold me is the simple fact that I couldn't tell where the story was going to go next. Is this "feel good" moment going to be spoiled by the supporting character being killed, or are we going to get to have it? Is that narrative thread going to be clipped short or snarl into the larger story? Is the new character going to betray them? Save them? Neither? Is someone going to get killed for emotional oomph? Is the search for a safe haven a pipe dream? Will it end with everyone dead? Are hopeless martyrdoms going to happen? Will the bad idea pay off, or get everyone killed? Will those crazy people be good guys or villains? The trick to this story is that Roux gets you to suspend your disbelief & plays against genre tropes & the readers expectations with the very novel trick of writing a story. She isn't out to subvert anything or explode the medium, but she's also not writing a cookie cutter version of a tried & true recipe. She just writes a novel. Sounds crazy, right?
Collapse