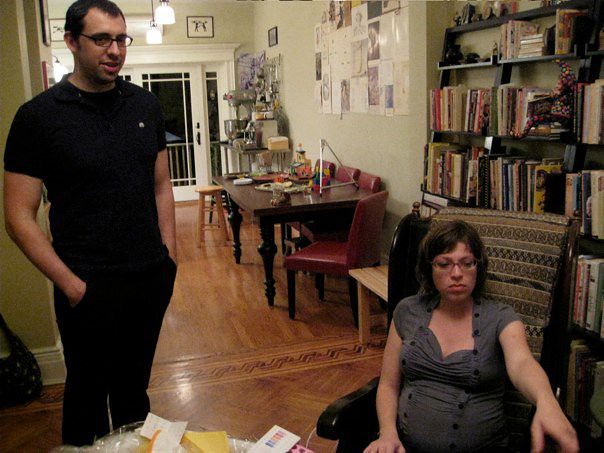 Kira's Baby Shower! Well, Kira & Nino, but proportionally she's doing the heavy lifting. Still, points to Nino for getting her pregnant & like...buying her ice cream when she wants it. That is hard work, too. Went to the gym before hand & had a nice little time of it, upped the plates on a few machines. I am still sort of in that perpetual zone of needing to be better about attending but still attending fairly frequently-- too many "twice in a week" slip ups, though. Theoretically I am supposed to go every other day, but realistically three times a week affords me the ability to be flexible with my schedule, you know? Now if only I could focus on having less carbohydrates for lunch I'd be on point. I am strong, I could fight you & kill you. That occupies a lot of my thinking time. So I went to the gym, & then I went to Kira & Nino's thing at Robert & Judy's! Jenny was already there-- she had gone ahead to help set up while I "pumped iron." It was nice, but also chock-full of people I've met but didn't remember. I stuck to people I did remember, & I did okay for myself. Though I spilled whiskey sauce all over myself. Also I think I spilled gumbo all over myself. I'm a disaster, a huge mess. Speaking of whiskey sauce, it was basically just whiskey; it went all over the bread pudding. Eventually people started trickling out, & then it was sort of down to the core group of me & Jenny & Donna & Jodi. Or did Donna leave before? Whatever, I'll count her, I like Donna. We stayed to watch Kira open gifts & there was lots of oh & aw over the tiny baby cloths. Also, there was a duck cape! & I mentioned that I have a duck cape & everyone thought that was odd. At last it was time to go, & we managed to pile what, like six of us into the car. Judy drove, & Kira got the front seat, & then it went Nino, Jenny, Jodi, Me. Dropped off at home then Zzz.

Today has been very lazy, very laid back. Jenny & I watched Saturday Night Live, which was fun, & made me like Kanye West again. As Jenny put it, we manage to simultaneously like & hate him, which is what he is going for, but we also manage to not care about him at all at the same time. His performances on SNL always make me like him though. We also watched Outsourced, which isn't particularly good. It isn't quite as offensive as you'd imagine, but there are plenty of moments where you cringe. One could argue that it is the characters making flubs, being dicks, but I also...well, I don't like the morons who are put forward as "The American." I don't think the Everyman is really that dumb, but then...well, okay, I know he's that dumb. I know The American is terrible. Doesn't mean we can't have better propaganda for him. Otherwise, nothing doing. I have batted the idea of a Dungeons & Dragons game around with my co-workers, & they seem to be on board, so I whipped together a mini adventure for them. You know, I've never Narrated a Fourth Edition game, so it was actually a lot of fun. I will of course report how it goes, if it actually crystallizes into being. Ate eggs & bacon & home fries for breakfast & a sandwich on a bagel (...& a bagel) for lunch. Look, there you have it, there is my Sunday. Oh that, & I've read like two years worth of The Non-Adventures of Wonderella, which reminds me a lot of early Scary-Go-Round.
Collapse