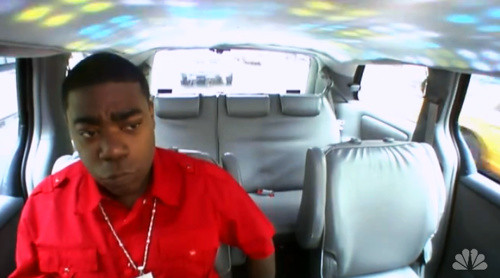 Last night Jenny came home feeling tired & a little bit crabby, so we went out to Thai Sky & split a bottle of wine. Pretty nice, but I guess I was feeling out of it, too! We were a couple of Zoned Out Robot Zombies, but no problemo. Who cares, not us! We ended up coming home & watching Community, which was pretty wonderful-- Drew Carey being funny? Hey I almost thought that was an illusion of memory, but I guess he can be funny. Huh, how about that. Then Thirty Rock, which wins for having Tracey Jordan in the Cash Cab. Yeah, that episode was pretty great. Then we threw in the towel. Bedtime! It meant I blew off Andy's birthday, but I'm an old grump, parties that start at nine are too late. Well, I was going to try to go, but between Jenny's bad mood & a couple of scheduling things, it wasn't going to happen. Though I did get lunch with

fayefaery had recommended it to me as research for playing Daniel Engine in Cocktails at the Centre of the Earth, but I am just not getting around to it. How about that. Then the other night-- Thursday night, I guess-- I finally got around to watching Iron Man 2, which I'd missed in the theater. It is pretty good! It didn't get as much positive buzz & chatter as the first movie, but then I think the first one took everyone by surprise. Hollywood has been trying to shill the "dark & gritty" superhero movie for a while, so having a fun action adventure movie starring a flawed jerk was a revelation. The second movie is more of a recapitulation-- it is the logical sequel, there isn't anything shocking here. Scarlett Johansson is attractive, Nick Fury is cool, what do you want? I know what I want-- I want Thor to be totally awesome, & I want Captain America to be totally sweet & I want The Avengers to totally rule. That is my laundry list.
Collapse